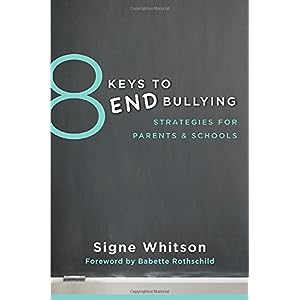 A school playground aide sees third-grader Riley grab hold of classmate Liza’s scarf and choke her with it. Riley is subsequently viewed as the bully. But is there more to the story?

What the aide hasn’t witnessed is the endless ridicule Riley has experienced from Liza and Liza’s best friend, Jada. Liza and Jada have learned they can provoke emotional outbursts from Riley — a girl who has been diagnosed with Asperger’s Syndrome — through constant social exclusion. Riley is a “bully-victim,” a young person who can be aggressive toward others but who can also be a target for bullying. She serves as a reminder that the culture of bullying is far more pernicious than we might realize.

It’s clear that bullying’s nuances do not elude Signe Whitson, a social worker and school counselor who writes about Riley and others in 8 Keys to End Bullying: Strategies for Parents & Schools. In this comprehensive book, Whitson argues with passion and clear-eyed conviction for various methods by which we can create safer and healthier learning environments.

Refreshingly, Whitson doesn’t build her case on untested anti-bullying advice, but instead takes a sledgehammer to many long-held myths by drawing upon real research. For example, Whitson points out, children are frequently told to ignore verbal bullying, but the literature shows this to be one of the least effective methods available. And bullies are often not driven by insecurity, as is commonly portrayed in the movies, but by a drive to increase their social status, Whitson writes.

From Whitson’s realistic understanding of student dynamics comes a practical set of strategies to reduce bullying in schools. A great start, she writes, is for school staff members to establish genuine connections with students. According to the National Center for Learning Disabilities, school personnel notice or intervene in only one out of every twenty-five incidents of bullying; thus, it makes sense that a reliable way of staying informed is to encourage kids to approach the adults in their lives — and to make them feel safe in doing so.

When children grow to trust teachers, school aides, and other adults, it also becomes easier to implement the book’s other anti-bullying suggestions. One is to deter bullying by increasing the presence of adults in a campus’s common areas. So, too, will it become easier for another strategy: to promote a cultural norm that student popularity should revolve around being well liked rather than socially feared. Whitson gives an A+ insight — one of many in the book — that teachers should refrain from catering to students’ social hierarchies, which often allows bullying to fly under the radar with tacit approval from faculty.

In addition, Whitson dedicates a chapter to reaching out to bullies directly — something that we may not do enough.

It’s worth noting, however, that many of the book’s strategies center around the ability of faculty to influence students. This becomes more difficult as students get older, when, Whitson acknowledges, kids’ behavior becomes less malleable and children increasingly feel that adults have less to offer them.

Whitson’s suggestion of separating and mixing up cliques, for example, may work harmoniously with elementary kids but backfire with older students as administration-led initiatives become increasingly unpopular. Still, that’s less a knock on Whitson’s efforts and more a reflection of the exponentially more complicated social norms of older kids, which might require a whole separate book.

Perhaps because of this increased difficulty as kids become teenagers, Whitson shines when she approaches anti-bullying from a teaching framework rather than a punitive one. It stands to reason that students will be more wary and indignant of authoritarianism as they grow older, and that punitive measures will not work as well.

In her cyberbullying chapter, Whitson does propose having children hand over their online passwords — but the tradeoff may be resentment and your child’s view that you don’t trust her, both of which could be counterproductive. Educating kids about online behavior, which Whitson suggests in the same section, sounds like a better, less authoritarian strategy. The notion that an embarrassing photo you post online is permanent — and could go viral — can serve as a wake-up call to kids and be far more effective as a teaching device than, say, taking away their social media independence.

Indeed, Whitson’s overall emphasis on having conversations with kids, exchanging ideas, and fostering mutual agreement will undoubtedly benefit both parents and children. When you give your student a seat at the bargaining table, Whitson writes, he is far more likely to comply with the resulting agreements. It’s an excellent observation — and most kids are sure to agree.