Reviews Home » A Brief History of Lies: The Most Brilliant Book Ever Written 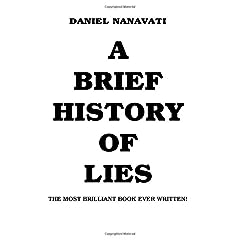 A Brief History of Lies, The Most Brilliant Book Ever Written takes both a serious and humorous look at lying; the good, bad, and the ugly.  It shockingly reveals research that shows 1 in 5 things human say in social situations lasting more than 10 minutes are generally lies, and goes into classifying the different types of lies and reasons we lie.  Specifically, the book looks at lying in children, adults, politics, relationships, business and war, and finally talks about how to spot a liar.  I was at first put off by the title, but shortly into the book realized it was a play off the very subject of the book, one that I think was brilliantly written, easy to read, and a disarming journey into the ethics and understanding of lying.

As you can see, it is an exhaustive list.

The thing I find most interesting about this list is it really makes you think about your own propensity to lie, and even if you think ‘not me,’ you listen to the description of exaggeration or jest and relate.  Nanavati speaks of the types of lies all of us willingly cooperate in without hesitation, including Santa Claus, the tooth fairy, other mythical characters, divorce, and talking to children about penises and vaginas.  And while we usually associate lying with ‘bad,’ this book presents it in a light that actually excuses lies in certain circumstances and considers it a good thing in others.

A Brief History of Lies also discusses research into the physiology of lying. This includes an MRI study by the University of Southern California in 2005 that showed that pathological liars had significantly more “white matter” in their brains and slightly less “gray matter” than those they were measured against.   The suggestion is that if this is further studied in the future it can be used in a variety of ways including the court system, human resources, and others.

The review of lying in relationships is exhaustive.  It really makes you think about your ability to have an honest and open relationship.  Lies cited include flirting, past relationships, physical appearance, career, feelings, beliefs, financial issues, and enjoyment.  So if you tell your girlfriend her shirt looks nice or your husband he is the most handsome man you have ever seen, you are included in this list of liars.

Interestingly enough, Nanavati thinks that lies in war and business are basically the same. As he so eloquently states:

War is business by another name and business is war without the bloodshed – although in criminal business one should assume a certain amount of bloodshed.

The same language often is used in business and war: tactical meetings, making a killing on a stock, hostile takeovers, propaganda.  Military strategy really is the art of lying, in which we figure out ways to justify killing others for our own means.

According to the police services, about four percent of people are accomplished liars and can lie very well.  They are expressionless, rarely move hands and fingers, and avoid eye contact so as not to be discovered.  They blink less, touch their face, throat, and mouth as they talk, and will scratch their nose or behind their ears.  They may place objects between you, get defensive when challenged, show delayed emotional reactions, and use contractions less often when they speak.  They also often fail to make direct statements, so that their answers may be implied and not come back to haunt them.  Liars don’t like writing things down.

Needless to say, the book is very intense yet a quick and easy read at less than 100 pages with some funny cartoons along the way.  In many ways it will shake your fundamental beliefs about how we function as a society, and question what is really the truth vs. what we think is the truth.  So while I found it very interesting, I thought it was quite disturbing at the same time.

Are we really that awful?  Who do we trust?  How do we keep our faith?  What do we protect that is really legitimately important vs. what we only perceive to be important?  Can we ever trust politicians?

I would have liked to have seen a bit of a balance of hope at the end, possibly something we can do about the lying or ways to live life more truthfully.  The book does a great job of raising awareness of the issue of lying, but does little in terms of suggesting how we can reconcile this with reality.  Is lying really the only option?  Are we all liars?   Are there any people in history that are admired for their truthfulness?

APA Reference
Goetzke, K. (2016). A Brief History of Lies: The Most Brilliant Book Ever Written. Psych Central. Retrieved on January 20, 2020, from https://psychcentralreviews.com/2016/a-brief-history-of-lies-the-most-brilliant-book-ever-written/