Reviews Home » A Cluttered Life: Searching for God, Serenity, and My Missing Keys 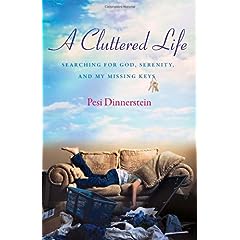 A Cluttered Life: Searching for God, Serenity, and My Missing Keys is written for anyone who has felt the pull between the chaos of everyday living and the longing for a rich spiritual life.  Pesi Dinnerstein has the same bare-all mentality that Elizabeth Gilbert did in Eat, Pray, Love, so much so that Judith Leventhal, coauthor of the best-selling Small Miracles series, claims that if you liked Gilbert’s book, you’ll love Dinnerstein’s.

Dinnerstein isn’t afraid to admit unbecoming things and, perhaps because of this, she seems to be more self-aware than most.  She openly accepts her tendency to collect clutter and often finds humorous and creative ways to show this to the reader.  She explains in her introduction that the clutter can inspire her, as it is a collection of aspects of her life, but also seems to block her road toward enlightenment.

This is by no means, as Dinnerstein reiterates, a book to help you organize or declutter your life.  It is instead a memoir-like account of how Dinnerstein began to realize that the very thing she didn’t want to deal with was exactly what she needed to look at the whole time.  She explains how she often looked at the piles of paper on her desk or the clutter packed in her closet and decided to ignore it because she was on a bigger search for spiritual guidance.  Unfortunately, the more she ignored her clutter, the more it dominated her life and the farther she was from her spiritual goal.

This book is a journey and Dinnerstein is a faithful guide who does not close off any part of her life to her readers.  Most important, while she is aware this is a journey, she is also aware that ‘moving forward’ doesn’t necessarily mean moving in a straight line.  She accepts help, support and guidance from a variety of people and lets their ideas permeate her own and change the course of her journey.  In fact, she first comes to the realization that her clutter may be blocking her path toward God through bumping into an old acquaintance she wasn’t even fond of.

Dinnerstein’s ability to remain open is refreshing and realistic because it is true to the natural paths our lives take; she does not force a logical order on her process and that meant a lot to me as a reader.  She writes at the end of her book that “originally [she] set out to write a book about [her] relationship with clutter.  That soon evolved into an exploration of [her] search for a deeper spiritual connection.  However, in the end, the book has turned out to be as much about [her] friendship…” Through these words, she shows how she allowed the universe to have a hand in guiding her.  She did not set out to bulldoze a direct path toward enlightenment; she understands that a journey often points you in a variety of directions that were never planned on.

The biggest question she wrestles with throughout is a “chicken-and-egg issue between [her] Higher Power and [her] clutter.”  She wonders, “did [her] clutter get in the way of [her] relationship with God, or [she] create all that clutter to avoid the relationship?” She worries that she has unconsciously been thwarting her own efforts throughout her lifetime. This question also addresses a larger idea about the connection between the physical aspects of life and the spiritual.

While I am not personally as much of a clutter-bug as Dinnerstein, it made me think about how seemingly small aspects of the physical life can reflect and restrict emotional progress.  I understand what she means when she says that she often was not ready to let go of items, though she no longer needed them.  While it may seem like junk to someone else, it is a physical representation of the past and that relationship will invariably affect your future.

As said before, Dinnerstein does not pretend this is a straight journey.  She responds to outside influences and takes her time, which allows you as a reader to do the same.  Throughout the book, she relies mainly on her friendships, but also delves into psychological ideas, a 12-step program, a trip to Israel, and finally, the Kaballah.

I enjoyed accompanying Dinnerstein on her journey and felt connected to the way she viewed the world.  She is a woman of the real world, with dirty laundry piling up, house payments, deep friendships and a serious concern for a world beyond this one.  I liked that I could see all the parts of her life and that she was so open both to her readers and to accepting help in her own life.  I found, however, that some parts were almost too detailed, though.  I’m sure this was amazingly therapeutic for her to write and found that some parts seemed more for herself than for me as a reader.  This was nothing that completely soured me on the book, though, and I would still recommend it to others. Her story inspired me to begin thinking about my own ideas on spirituality and how I may be standing in my own way.

Your Body Will Tell You When a Mood Change is Coming