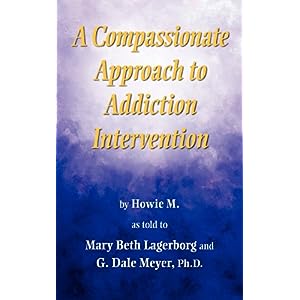 Interventions make for interesting reality television, but how are they done in the real world? How do you get someone you care about who is drinking himself, or herself, into oblivion into treatment? And how do you do that in a respectful way that both honors the person’s rights and also helps them move towards change?

Howie M. has been doing interventions for many years. The first intervention he experienced was his own. His wife told him that he needed to go to treatment for his drinking or she and their children would no longer be a part of his life. He got sober at the state hospital. That was a long time ago. When Howie was writing A Compassionate Approach to Addiction Intervention—for which he is listed as author alongside contributors Mary Beth Lagerborg and G. Dale Meyer—he was 78, and had been doing interventions for 46 years. His interventions number over 2,400. He didn’t get a degree or medical credentials, but nonetheless evolved into one of the most respected interventionists in the business.

Howie’s book is especially interesting to me because I have worked in the substance abuse (now called substance use disorder) field since the 1970s, and I have known people with alcohol and other drug problems all my life. Like Howie M., the field has evolved over the past 40 years in some remarkable ways. We have gone from the in-your-face denial-busting approach to various others such as solution-focused counseling, motivational interviewing, and other evidence-based practices. Most are grounded in the transtheoretical model of how people change. People like Howie M. have influenced how interventions are done.

This is an oral history, and the first part tells the story of Howie’s path to sobriety and how he learned and evolved his method of intervention. He began his career by going out on 12-step calls. One of his learning experiences was the loss of both his closest friend and his brother. His friend and his brother were both working in a bar when the friend asked Howie to get them jobs where he worked. Howie agreed he would try, but only after they had been sober for a year. Then his brother died in an accident and the friend blamed Howie. The friend then lost his marriage and committed suicide. These were terribly difficult losses, Howie tells us, replete with massive guilt. Regret is a difficult lesson.

In addition, Howie’s sister was disabled and lived in a hospital. Howie learned from her that people just want to be acknowledged as human beings. His 12-step calls, experiences with family and friends, and painful losses all taught Howie the importance of respect, sober thinking, and accepting responsibility.

Howie and a friend set up an answering service for recovery calls, and from this friend he learned patience, gentleness, and compassion. He also learned that even when the call is painful, you still make the commitment and the sacrifice. Through his friend, he learned to accept a higher power. In A Compassionate Approach, we learn about the relationships Howie has had over time, and how they changed his relationship with himself and with others.

The second part of the book is the story of the steps that Howie takes in an intervention. He says that when families decide that an intervention is necessary, they have often felt that way for some months and that an event, such as a DUI, is what finally sets them in motion. Howie makes clear that the goal of the intervention is to get the person into treatment and that it is not a cure in itself nor a guarantee that treatment will immediately change the person. What it does is get the person into a program where he ore she has a chance to change.

As someone who works in the field myself, I believe that you do not have to wait until someone hits “rock bottom” to intervene. The concept of “rock bottom” has always bothered me. Things can always get worse, and, really, the only rock bottom is death. So, I was glad to see that Howie advocates for doing something sooner, before “rock bottom.” It was also good to see him using a positive approach: no condemning. His goal is to pick a team of people important to the person who will talk to him or her with compassion and respect so that the person will listen and not feel compelled to go on the defense. Howie chooses who can go on the team. He meets with them ahead of time, and has them write letters to the person. He picks the place where the intervention will occur and takes safety as a prime consideration.

He says that he has also found over the years that it is best to listen to his instincts. If someone or someplace feels wrong for the intervention, then it is best to listen to that feeling, he tells us. The times he hasn’t listened, there were problems—and he shares those stories. He also believes that one should save the use of “consequences” for last and use them only if necessary.

The family arranges the treatment and transportation in cooperation with the program ahead of time. And even then, Howie says, he knows sometimes that he will have to adapt to unforeseen circumstances. Over the years, has also learned the importance of improvising.

The last four parts of the book are guides for finding an ethical interventionist, lessons from AA, stories of some of the interventions Howie has worked, and a checklist for a successful, compassionate intervention.

There may be some readers put off by the emphasis on the traditional 12 steps. Howie seems to have anticipated that, and does not refer to AA by name until late in the book. He just calls them “recovery groups.” There also may be some who are put off by the concept of interventions. Interventions can be done in an old in-your-face judgmental way that does more to vent the anger of those hurt by the person’s drinking than to get the person to agree willingly to treatment. This book is a welcome alternative. Whether 0r not you agree with AA or the concept of a higher power or interventions, you can learn a lot about how to treat people and get them to listen and consider change. Howie’s voice, his way of treating people with compassion, dignity, and respect and of speaking to people in a way that they will listen is well worth the read.