Reviews Home » A Gentle Path through the Twelve Principles: Living the Values Behind the Steps 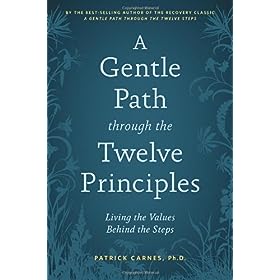 Renowned addiction expert Patrick Carnes, Ph.D. penned the classic A Gentle Path Through the Twelve Steps in 1994. While this book has helped hundreds of thousands of people, it is admittedly finite. In Carnes’s words, “many people who have been in recovery for a year or more need a book that condenses and presents the essentials of long-term recovery in a practical, deliberate way.” A Gentle Path Through the Twelve Principles is that book.

Essentially a sequel, Twelve Principles picks up where Twelve Steps left off. As Carnes breaks it down, the first book is for addicts currently in recovery: it teaches them how to use the twelve steps to overcome their addiction. Upon finishing the steps, though, something else is needed—a method of integrating the twelve principles into one’s life for sustained sobriety.

In the introduction, Carnes is quick to point out that the principles are not rules. The latter has a different, more negative connotation, and does not fully encapsulate what a principle means. Carnes writes:

Principles represent a higher level of learning and thinking than rules or guidelines do. A rule is something to follow, usually in the precise way prescribed, but a principle is something to reflect on, implement, and live into. Rules are typically remembered and recited verbatim; principles are experienced in our hearts, guts, and brains. (Italics in text)

Each principle gets its own chapter, with Carnes dedicating roughly equal attention to all. The book is divided into four sections: “Making Sense” contains the first five principles, “Creating Congruence” the next four, “Growing Vision” gets the next three and “Living Into the Principles” composes the final two.

A Gentle Path Through the Twelve Principles is more or less constructed like its predecessor: after some preliminary information in each chapter, the book turns into a workbook where individuals literally work through the principles.

Chapter 2, “Awareness,” contains some interesting exercises to use as examples. Carnes commences by writing:

Addiction gives us tunnel vision and narrows our attention to those things that satisfy its demands, creating a poverty in our inner and outer lives. Recovery expands our attention—first beyond our addiction, then beyond our fear and stinking thinking, and ultimately far beyond ourselves, into deep awareness.

When an individual is addicted, he loses virtually all sense of awareness, finding himself consumed by physical and psychological urges that will not dissipate until acted upon. When sober—as well as in the process of sobering up—it is important, and according to Carnes, vital, to cultivate awareness. In this way, after accepting and surrendering, through the first principle, to “the irrevocable realities of our life,” it becomes necessary to truly understand them.

The exercises for this principle are fascinating because of the way they demand the individual to confront his demons. When Carnes asks readers to list the worst and best moments of their lives, he is forcing them to relieve those times, both terrible and glorious. But this is not without purpose: Carnes wants the individual to meditate on and reconsider the severity (or lack thereof) of those moments. He asks: “Did it force you to take action or make a decision? What was that action or decision? Did it change your life for the better? In what specific ways? Did it change anyone else’s life for the better? In what ways?”

What Carnes is doing by forcing the individual to undergo this line of questioning (as well as several more) is getting him to become aware of those moments. Instead of merely remembering them and then feeling either happy or sad, Carnes tries to get to the root of those feelings. Why did it make you happy? Why did it make you sad? In so doing, awareness is cultivated and the addiction is understood on a higher level.

Just as he was for A Gentle Guide Through the Twelve Steps, Carnes should be praised for his newest contribution. He saw a void, and he filled it intelligently and perceptively. None of the exercises or discussions is unnecessary, uninteresting or redundant.

Carnes is one of the foremost experts in his field, and he is someone worth learning from. For anyone who is in need of professional advice on how to live post-addiction, A Gentle Guide Through the Twelve Principles is a great place to start.

APA Reference
Berkowitz, D. (2016). A Gentle Path through the Twelve Principles: Living the Values Behind the Steps. Psych Central. Retrieved on February 17, 2020, from https://psychcentralreviews.com/2016/a-gentle-path-through-the-twelve-principles-living-the-values-behind-the-steps/