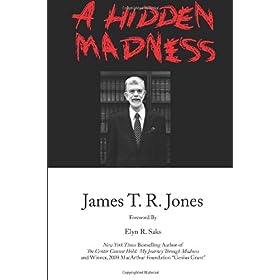 Memoirs of mental illness have crowded the literary landscape for the past two decades, and many have veered toward the sensationalistic in an attempt to stand out from the pack. James T.R. Jones’s A Hidden Madness, new memoir of his decades-long struggle with bipolar disorder admirably resists this temptation, choosing to focus instead on how Jones has lived — and managed to thrive — with a condition that disables so many others.

With this approach, Jones, a long-time law professor at the University of Louisville, models himself after Elyn Saks and Kay Redfield Jamison, other successful academics who “came out” as having serious mental illness after concealing their conditions for many years. Both Saks and Jamison wrote graceful and poignant memoirs detailing how they managed to lead successful and fulfilling personal and professional lives in the face of chronic and often disabling conditions – schizophrenia in Saks’ case and bipolar disorder in Jamison’s.

A Hidden Madness is less a tale of dramatic dysfunction, then, and more one about how Jones came to accept the reality of that dysfunction and took all necessary steps to bring himself back from the brink of his crushing depressions and, to a lesser extent, florid manias. Jones is, as he notes, a rare example of a patient with bipolar disorder who has been almost completely compliant with the advice of his doctors and therapists. He repeatedly sought out top-notch experts to provide him with both medication and therapy, and quit his medication against medical advice just once in three decades of treatment.

Jones considers his compliance with his clinicians’ advice as crucial in his ability to succeed personally and professionally, to weather breakdowns that might otherwise have left him jobless, homeless, friendless and penniless and, often, to allow him to come back stronger than before.

But his book is more than a simple lecture on the virtues of doing what the professionals say. It is also an account of how many, small, everyday life choices can make a huge difference in the outcome of serious mental illness. Much has been made of the therapeutic effects of pets; Jones’s utter devotion to the several dachshunds he has owned since childhood, including one whom, he says, he “almost worship[ed]” is touching and a testament to the strength many people derive from having animal companions who love and stick by them unconditionally.

Similarly, what may strike some readers as tangents about Jones’s eclectic hobbies — an almost obsessive love for classical music and fervent enthusiasm for target shooting, medieval and civil war reenactments, war games, and other pursuits – show the importance of having passions outside of work and family commitments, as well as having friends who share these interests.

In Jones’s case, his ability to sustain enthusiasm and commitment to these activities, as well as to his pharmaceutical and therapeutic treatment, is especially notable. He details again and again how his “fragile ego” is “inextricably linked” to his academic and career success; setbacks in these realms plunge him into ghastly relapses on repeated occasions. Given this outlook, it is easy to see how he could have focused on his career at the expense of almost everything else. Yet even as he suffers through powerful suicidal thoughts and urges, he is somehow, remarkably, able to distance himself from the all-consuming misery of the present and take steps that deep down, he knows will help him recover.

Yet, A Hidden Madness mostly manages to steer clear of being self-serving or grandiose. Jones is painfully frank about his shortcomings and mistakes, and poignantly bears his doubts and insecurities. Occasionally, he seems a little too eager to justify himself to the reader, to explain career and personal setbacks as the misunderstood outgrowths of his disorder (digressions into academic politics, for example, will likely strain most readers’ patience).

Even these sometimes-labored explanations, however, bear witness to an important underpinning of the book itself and to Jones’s motivation for writing it. Ultimately, it is an attempt to explain and explore the stigma that still keeps so many with emotional and behavioral problems — especially those with particularly stigmatized conditions such as bipolar disorder, schizophrenia, severe depression, and personality disorders – from revealing to employers, colleagues, and even friends and family the reasons for their ongoing struggles.

It is telling that a tenured professor, perhaps one of the most secure professions that exists, was still too terrified of sanctions and judgment to disclose his condition to any of his colleagues for the better part of two decades. Afraid to ask for help, Jones describes himself as “out in the dark, a marginal figure in the world.” Poignantly, he writes that, “Effectively the only ones to whom I could open my heart were the doctors and therapists I paid to listen to me.”

Many readers who cope with chronic mental illness, or those with loved ones who do, are a likely to find the overall arc of A Hidden Madness to be both compelling and inspirational. That said, the book has notable weaknesses, especially when compared to the best memoirs of mental illness.

Jones’s prose can be clunky, and, more frustratingly, he tends toward general descriptions of his emotions and behavior, often failing to bring alive what it actually feels like to be depressed, suicidal, manic, or anxiety-ridden. Throughout the book, I found myself wishing that Jones could more powerfully and evocatively describe his depressions and manias, as well as his recurrent self-doubt and self-loathing, to animate these moods and states of mind for readers who have never experienced such things. When he did include details – hearing complete operas and symphonies in his head while manic, for example, or going off on wild tangents about soap opera trivia while teaching law school classes – it significantly enlivened the narrative.

I had initially been attracted to the book because I’d heard it discussed the social isolation and brutal bullying that Jones experienced as a child and teenager and hoped it might elucidate how this early trauma contributed to his later illness, which wasn’t treated until his mid-20s. Jones notes repeatedly that the experiences plunged him into early depressions and briefly mentions that research has established links between bullying and bipolar disorder in particular. But unfortunately, he neither recreates his experience in enough vivid detail to give readers a sense of what he actually suffered nor goes into a broader discussion of the research on the topic. In general, the book would have significantly benefited if Jones had placed his story in a broader context more often, explaining how his own experience was typical or atypical of others with severe mental illness.

Still, A Hidden Madness remains a powerful account of the travails of bipolar disorder and its effects on family, social life and career. And most importantly, it demonstrates that with the right supports and the right outlook, resilience in the face of repeated emotional crises really is possible.

4 Ways a "Narcissist" Gets the Upper Hand