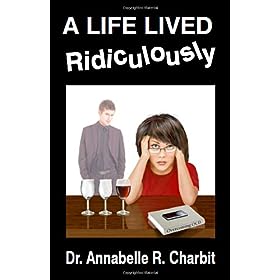 Dr. Annabelle R. Charbit, PhD in neuroscience, accomplished writer, and lifelong sufferer of obsessive-compulsive disorder (OCD), has used all three of these descriptors to write A Life Lived Ridiculously, her intriguing first novel.  The book whipsaws between exposition of two well-known psychological disorders, romance, and detective fiction: When Maxine, a young biologist, meets Sam, an apparently charming and terminally ill sociopath, her life becomes completely enveloped by him.

Dr. Charbit uses the evolution of this story to give a voice to the many people with OCD who do not fit the typical mold of cleaning, checking, or hoarding, but instead have more diverse symptoms that may not be documented in textbooks.  She also exposes our collective susceptibility to manipulation in a way that may have you reevaluating certain interactions in your life.

We meet Maxine, a single, Jewish, late twenty-something, first in the context of her parents’ wealthy home in London.  Since childhood, she has had an intense aversion to possessions — clearly the early manifestation of OCD, but seen by her parents as mere rebelliousness against their prosperity.  Her inner dialogue, though, makes it plain that it is much more:

As soon as I closed the door, it was like the devil was standing behind me and all thoughts of our fun weekend evaporated [… The] corner of my bedroom contained many important items …instead of being a source of pleasure, these items taunted me with their preciousness, holding me prisoner in my home.  Without them, I wouldn’t need to worry about fires, natural disasters, malicious entities, and the apocalypse [… but] I had baggage. (pp. 43-44)

Maxine’s thoughts are so consumed with this and with other obsessions, such as needing the appropriate lighting for her apartment (a process that takes over her life for weeks), that she feels either mentally disabled or slowly losing her mind.  She doesn’t recognize her problems as a diagnosable disorder because all of her exposure to the idea of OCD has been about the cleaning or repetitive checking, not anything like what she’s experiencing, which is “…life where I constantly feared that something would spark a new obsessive thought to add to the already long list that was eating away at my youth” (p. 197).

With so much energy drained by internal battles, Maxine’s social life is nearly nonexistent.  Claude, her brother, used to be a close friend, but now is wrapped up in his new girlfriend, “Miss Perfect”—we never do learn her real name.  It is at her parents’ New Year’s Eve party that her loneliness led them to introduce her to Sam.  Her first impression isn’t positive, but after seeing him again at a Jewish singles event, they begin a complicated relationship.

From the first sentence of A Life Lived Ridiculously, it is clear that there is something very off about Sam.  He holds himself aloof just enough to feel like he’s rewarding you when he gives any detail whatsoever about his life—which has not been a happy one.  He tells Maxine that he has no family, a late ex-girlfriend, and is terminally ill to boot.  It slowly becomes clear to the reader, though, if not to Maxine, that he is incredibly manipulative.  He disappears without notice for days or weeks at a time and sends mixed signals regarding his desire for intimacy, causing her immense emotional trauma. He avoids all questions about his illness by being very vague about his exact diagnosis, symptoms, and treatment plan.  This works well for Sam, since it is very hard to feel justified in prying into a terminally ill person’s issues and business, especially because he leads Maxine in circles when she tries to establish the nature of their relationship.

Sam uses what Dr. Charbit calls the “ability to monologue incessantly while actually revealing nothing” to wrap Maxine in a cocoon of pity, guilt, shame, and fear, to the point where he becomes the focal point and the epicenter of her universe.  It’s not until she finds his diary that she is confronted with hard evidence of his lies, which include possibly being gay, not having cancer, his whereabouts when he told Maxine he was in treatment, etc.  Sam, of course, shows no remorse or even knowledge that he’s is in the wrong:

Listening to the flow of garbage that spewed out of Sam[…]  It all seemed so obvious now, his manipulative pity speeches so transparent […] This was all a big game to him (p. 195).

At this point, it is still unclear what Sam’s motivation is.  After further investigation, Maxine is emailed an article from an Australian newspaper.  Sam (alias Shane) is outed as the “Suicide Killer,” a pathological liar and sociopath who has thus far led four victims into committing “murder by suicide.”  Maxine slowly grasps the meaning of this revelation:

…I had spent all those hours in the company of a man who wanted me dead.  I recalled how he had spoken so movingly about his ex-girlfriend who died from anorexia…he wasn’t sorry at all, he was proud, boasting about his achievement and perhaps also trying to plant the suggestion into my head (p. 221).

The severity of Sam’s intentions sinks in, and Maxine realizes she is lucky to have found out before her mental and emotional state deteriorated any further.  She hands over all of his information to the police, hoping, as the only survivor in his chain of victims, to finally bring him to justice.

The book ends with Maxine using her newfound strength to finally see a psychiatrist.  He explains that “OCD can manifest in an infinite number of ways, as is evidenced by your own symptoms,” which has the powerful effect of finally convincing Maxine that she is “not simply a moaner with too much time on her hands (p. 232).”  With a prescription for SSRIs and the number of a therapist in hand, she happily accepts a new job in San Francisco, escaping the prison of her former life.

A Life Lived Ridiculously is well written and well organized, with chapters neatly divided by month in chronological order from January to December, emphasizing the journey of both Maxine’s OCD and her relationship with Sam.  It does take a long time for the story to progress—Sam’s motivations and methods are frustratingly unclear for the first two-thirds of the book.  He seems illogical and without an end game, leading the reader to wonder where, exactly, this is going.  The quality of the payoff when you reach the denouement, however, is well worth the wait.  The farther you read, the more riveting it becomes.

There is also an incongruity between the book’s external portrayal of Sam, in words as a “sociopath” who has Maxine “under his spell,” and who, in the cover illustration, is a very attractive young man—not the decrepit described inside, including Maxine’s initial impression: “I recoiled the moment I saw him (p. 1).”

Don’t be fooled by the uninspiring quotes on the back cover.  You would never know the intensity of plot twists and turns from the bland: “I enjoyed this a lot.  Some really clever writing here.”  In fact, it would be much more helpful if some of the notes in the author’s accompanying letter were in the cover summary instead; for example, “mixing the OCD sufferer with the sociopath is combining a person who feels constant mental pain with one who feels nothing at all.”  Her explanations provide a context for the narrative that engenders a much more positive reaction to the book—now knowing what it is intended to accomplish.  Without this information, it’s easy to get the impression that it’s a whodunnit beach read, when really it’s a fascinating and important look at two important psychological disorders.

Slowly unraveling Maxine and Sam’s story is a satisfying endeavor, pulling away layers of societal presentation in order to reveal the complex workings of the mind.  Dr. Charbit does indeed use her vast experience with the subjects of the book to pull the reader in with remarkably developed characters.  Especially for a first novel, A Life Lived Ridiculously succeeds in its stated purpose: it makes us aware of and think closely about our stereotypes and generalizations in the mental health world.