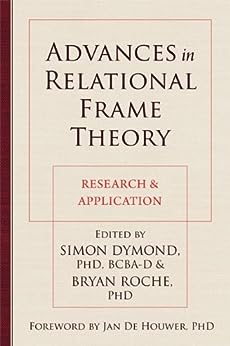 I had not heard of Relational Frame Theory before coming across this textbook, but my curiosity was piqued when I learned that it addresses how people communicate and how they behave in a contextual sense.

Relational Frame Theory (RFT) was developed by Steven Hayes, along with Dermot Barnes-Holms, Bryan Roche, and others who published the initial book on RFT, Relational Frame Theory: A Post-Skinnerian Account of Human Language and Cognition>, in 2001, a work which has come to be known as “the purple book” due to its cover.

The philosophy of RFT is to “understand human behavior using a distinct set of conceptual and methodological tools.” More specifically, it seeks to “understand, predict, and influence behaviors across a variety of situations and with precision.”  That’s a tall order, considering the vast number of variables, both internal and external, that we are faced with in our every day lives.  Now, Advances in Relational Frame Theory: Research and Application is intended to be a comprehensive introduction to RFT, and to fill in the twelve years of research since “the purple book” was published.

There are twenty-four authors of the eleven articles in the book, and the writing style is academic — what you would expect of a text with a subtitle of “research and application.” Unfortunately, although some of the chapter authors call for RFT to be “more accessible to individuals outside the academic audience,” the book only makes slight progress toward that end. It is still primarily geared toward academics and professionals. To open up the field to newcomers and lay readers, it could have provided a glossary of terms and concepts, as well as a list of commonly used abbreviations, of which there is an overwhelming number.

RFT is a theory that steps in where the well-known B. F. Skinner’s work, specifically his theory of language, was thought to be lacking in empiricism. RFT covers cognition, culture, and the cooperation between humans. Research within the field, according to the book, includes not only questionnaire-based studies and comparative learning but also fMRI studies. This emphasis on empiricism helps RFT avoid what is seen as the murkiness of cognitive or perhaps even cognitive-behavioral traditions.

RFT’s theory of language is interesting and reductionistic. It solves the problems of words ultimately being circular in definition by saying that words are just sounds or symbols that we learn through the behavioral context, and that the context we internalize subsequently has an impact on how we behave. From this we learn cues and verbal rules, and those rules drive our behavior.

In RFT, psychopathology is defined as simply “problematic rule governance.” The book explains that “dysfunctional behavior is generated and maintained on the basis of verbal stimulation” — and that Acceptance and Commitment Therapy (ACT) can change those behaviors.

ACT may not sound familiar, but you might recognize some of its techniques. One of these looks at the self “as process.” You give purposeful attention to events happening in the here and now, and you do so both internally and externally using a body scan. ACT’s “self as context” technique, meanwhile, has you focus and attend to the fact that you are the one doing the discriminating of the internal and external. Through this, you realize that you are perceiving behavior from your own unique perspective. ACT in this way is much like mindfulness, but from the perspective of RFT.

If all of this sounds too foreign, or if it has been awhile since you’ve studied behaviorism, you might want to do some quick web searches before reading the book. And although I am not calling for an RFT for Dummies, I do think that this text needed to move beyond data and empiricism.

The data that these researchers write about is essential, but we live our lives in stories, and we are more likely to learn from stories than from mere numbers and results.

Why A Narcissist Plays the Victim: A Telltale Pattern