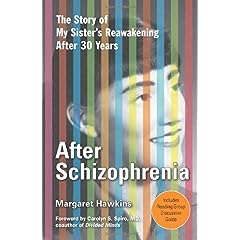 I was not sure what to expect when I first opened Margaret Hawkins’ After Schizophrenia. Memoirs about people suffering from mental illness are quite common these days and I was interested to see if the author would be able to provide a unique perspective on schizophrenia and the distinct difficulties that it can lead to. The subtitle of the book is “The story of my sister’s reawakening after 30 years,” which led me to wonder how schizophrenia would be looked at through the eyes of a diagnosed person’s close family. When all was said and done, I found that I was happy to have read the book. The author does an excellent job of bringing the reader into her personal story of dealing with her sister’s illness.

In my current position as a rehabilitation counselor at a psychiatric center (as well as in my previous employment), I have worked with numerous people who have been diagnosed with schizophrenia. I have witnessed how devastating the illness can be not only for those who are diagnosed, but for their family members as well. Schizophrenia is a commonly misunderstood diagnosis. The term “schizophrenic” is used all too often in horror movies and news stories alike with the intent of scaring people. In reality, the scary thing is not people who suffer from this illness, but how many people never get the help they need because of the stigma associated with the diagnosis. With this book, Margaret Hawkins helps to shed some light on this reality.

In After Schizophrenia, Margaret Hawkins tells us the story of her sister, Barbara, who suffered from schizophrenia for years without receiving any type of treatment. Hawkins begins by giving the reader some background about her sister. According to the author, Barbara was a “stunning and self-aware young woman” through high school and college. She was very successful both socially and academically. There were subtle signs that something might be wrong while Barbara was in college; however, she was able to complete her degree. She met a man with whom she fell in love and soon after completing college, Barbara got married and moved with her husband to Iraq. For the most part, it seemed as if all was going well.

However, as Barbara’s letters home began to change, the author realized that something did not seem right. Her sister slowly began to sound like a different person, and it was not clear what was happening. Eventually, Barbara’s marriage fell apart and she moved back with her parents. Like so many people who have been diagnosed with schizophrenia, Barbara’s symptoms started to take shape in her early adulthood and escalated rather quickly. Unfortunately, as is also too often the case, neither Barbara nor her family really understood the types of treatment that were available at the time or how to go about getting help.

As the title suggests, After Schizophrenia’s second half focuses on how Barbara was able to get treatment and become “reawakened” after about 30 years of experiencing symptoms. For anyone who has either suffered from schizophrenia or knows someone who has, this part of the book may be especially moving. While reading about the author’s first coherent conversations with her sister after years of attempts, I was reminded of many of my own interactions with clients after they had begun to participate in their own treatment. I imagine anyone with similar experiences will also have similar feelings reading about Margaret Hawkins and her sister’s journey.

One thing that should be pointed out is that the title of this book might be misleading to some people. The author does not suggest within the book that her sister is somehow completely “cured” of schizophrenia by the book’s end. Rather, the title is meant to convey that through obtaining treatment, Barbara was able to overcome some of the more debilitating symptoms that came along with her diagnosis. In the final chapters, the reader sees the slow return of the “stunning,” “self-aware” woman we are introduced to in the beginning of the book.

As someone who works with people diagnosed with schizophrenia on a daily basis, I know that the saga of Barbara and her mental illness is one that is very similar to that of many others. I hope that through books such as this, Margaret Hawkins and other authors will help bring schizophrenia out of the shadows of misunderstanding. I am a supporter of any work that helps bring to light the fact that with the proper treatment, people with schizophrenia and other similar diagnoses can live fulfilling, meaningful lives. This book certainly manages that feat in addition to being an emotionally powerful family chronicle. If you or someone you know is currently suffering from schizophrenia, After Schizophrenia will definitely be an inspiration.