Reviews Home » Alexis: My True Story of Being Seduced by an Online Predator 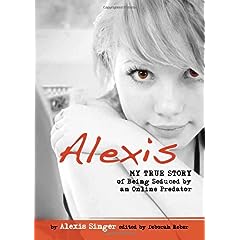 Alexis: My True Story of Being Seduced by an Online Predator by Alexis Singer is about a very typical teen issue, loneliness. Loneliness can drive us to do things that seem completely irrational even to ourselves and that is just what happened to Alexis. In this mini novel, she had just broken up with her boyfriend, she was a child suffering from a complicated divorce, and to make it worse, she was in her awkward mid-teen years. These type of things can seem like the end of the world at the young age of and in Alexis’s case, those things drove her to get involved in the seedier side of the Internet.

After Alexis gives readers a bit of a briefing on her background, she launches into a detailed description of The Board, an online forum of sorts for thespians. The Board was a place she found comforting because despite not having any real friends, she seemed to be making digital ones that enjoyed talking to her about topics she was genuinely interested in. This ended up turning into a bad situation because although the majority of the people she had met on The Board seemed perfectly normal, there was one very sick individual waiting for someone just like Alexis. Phil, as he was known, was in his late 30s and preyed upon confused young women who frequented The Board.

One especially lonely night, Alexis received a message from Phil asking if she was over 18 yet. This should have been a warning sign (even she recognizes that), but she was extremely desperate for some sort of attention and she replied. This was the beginning of a relationship of sorts that would include many inappropriate advances and words that no 16-year-old should ever hear from anyone (let alone a man old enough to be her father).

Throughout the book Alexis is coerced into having cybersex with Phil, taking naked pictures for him and even ends viewing a webcam live feed of Phil’s genitals. This may seem like enough to make anyone stop talking to a man like this, but Alexis explains how easily one can be talked into things. Phil was an expert at pushing the limits and then pulling back right when he knew she felt uncomfortable. He used this strategy to feel out how far he could push her and then later ended up getting what he wanted. What began with a simple request for an image of a new piercing became much more. In Alexis’s mind the transition didn’t seem like a big deal, since Phil made sure to ask for the “favors” in a very calculated manner.

Eventually, Alexis’s mother ended up finding out what has transpired and immediately banned her from the Internet. She also tried to find her daughter support groups and hired a detective to see if Phil could be prosecuted for being an Internet predator. In the end they decided not to press charges; the case could have caused more harm to Alexis’s life than one would think.

Alexis went to college and started to distance herself from the Internet and from Phil, though she does admit in the end that she still speaks with Phil every so often (though not in a sexual manner). She now has a new boyfriend and is learning the value of social interaction and honest love and friendship.

The book is very easy to read because it is small, the type is large, the chapters are short and without fail, each chapter ends with a little mini cliffhanger that makes you want to keep reading. The average to slower reader will be able to finish this book in less than two hours without breaking a sweat. The topic is interesting and engaging and Alexis is a character that is very relatable. Overall, Alexis represents the everyday girl you meet in high school — though she is sweet and endearing, there is nothing extraordinary about this character. She is simply ordinary, and that makes her real.

I think this book is a good resource for young girls who might be involved in an “innocent” flirtation with an Internet “friend.” It is from the point of view of a victim of online sexual abuse and therefore readers can empathize with her. It also does a great job of explaining teen loneliness.

I think that Alexis is a talented young writer and I hope to see more of her work in the future (hopefully about a brighter topic for her sake). As of September 2010 she is only 19, so I think readers can look forward to a wealth of interesting literature from Ms. Singer.

APA Reference
Fournier, G. (2016). Alexis: My True Story of Being Seduced by an Online Predator. Psych Central. Retrieved on January 23, 2020, from https://psychcentralreviews.com/2016/alexis-my-true-story-of-being-seduced-by-an-online-predator/