Reviews Home » Almost a Psychopath: Do I (Or Does Someone I Know) Have a Problem with Manipulation and a Lack of Empathy 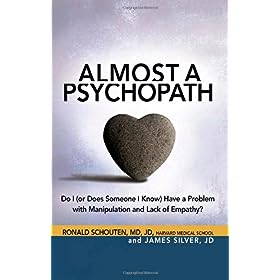 Almost a Psychopath: Do I (Or Does Someone I Know) Have a Problem with Manipulation and a Lack of Empathy

Do I or does someone I know have a problem with manipulation and empathy?

This is not just the subhead of the book “Almost a Psychopath,” but the underlying question that authors Ronald Schouten and James Silver help readers understand as they delve into the complex and often contradictory behaviors of psychopathy and its cousin, near psychopathy.

Readers learn about real people who show characteristics of actual psychopathy: manipulation, exploitation, deceitfulness, and lack of remorse. The authors compare these traits to people who have what they classify as “almost” psychopathy, as well as medical conditions with similar traits: borderline and narcissistic personality disorder, bipolar disorder, brain injury, Asperger’s syndrome, and even toxin poisoning.

By book’s end, readers should have a basic understanding of psychopathy—enough to do a lay assessment and map out a strategy for seeking help.

Silver and Schouten approach this topic and explain it with a breadth of experience and knowledge. Both are attorneys who’ve represented criminals in the courts. In addition, Schouten is a Harvard professor of psychiatry and director of the Law & Psychiatry Service at Massachusetts General Hospital. They combine their first-hand experiences with current scientific research to examine this topic in both abstract and concrete terms.

The book opens with a story about a true psychopath, Bill, who works in his company’s shipping and receiving department. He is known to have an explosive temper and brags about keeping a loaded shotgun in the trunk of his car.

When he asks a co-worker, Amy, on a date, she declines. Seeking revenge, Bill asks Amy’s best friend on a date. When they go out, Bill takes some suggestive photos of Amy’s friend. He then posts them on Facebook and sends the link to Amy, who is disturbed. A few weeks later, Bill calls Amy to the mailroom, claiming she has received a package. Though suspicious, Amy goes to the mailroom, where she finds Bill in a rage. He has learned that Amy went out with a co-worker, after turning him down. He screams at her, slams the door, and punches his fist through the wall. Amy escapes and Bill is promptly suspended.

What makes him a psychopath and not a near psychopath? The authors spend an entire chapter exploring this question. Readers learn the most prominent, consistent characteristics of actual psychopaths are narcissism, deceitfulness, and a lack of empathy. They may or may not have a criminal history. The majority do, because they have trouble abiding by the normal rules and laws of society.

This understanding of psychopathy serves as the foundation for all further explorations and comparisons. What separates this book from others on this topic is the authors’ “Almost Effect” theory. As they see it, behavioral and emotional aberrations fall onto a continuum, running from socially acceptable behaviors to full-blown psychopathy—a type of spectrum that we think of when talking about autism. As for the “Almost Psychopath,” the authors write, “Whether because of the nature of their behavior—simply beyond what most of us can comfortably ignore—or because they violate social or legal norms so frequently, these people live their lives somewhere between the boundaries of commonplace ‘not-so-bad’ behavior and psychopathy. In that balancing of influences, their calculations more commonly lead them toward behaviors that most of us would find offensive and contrary to social norms.”

In medicine, this “almost effect” is referred to as a sub-clinical disorder. In fact, this book is part of the “Almost Effect” series, which, so far, includes this book and “Almost an Alcoholic.”

Their theory not only makes sense, but is slightly comforting. Anyone who has spent time in the mental health system knows that there are more shades in of gray in psychological labeling than black and white definiteness. A sliding scale seems more realistic (unless, of course, you’re dealing with Charles Manson or Ted Bundy). The authors take a conversational and practical approach, though the text is in no way dumbed down.

There’s not much to criticize about this book. However, despite of the authors’ strident efforts to distinguish between the different mental conditions, the sheer difficulty in pinpointing an exact psychiatric illness remains tough. Readers may come to the confusing and frustrating conclusion that the person they’re trying to understand is part narcissistic, part bipolar, and maybe even part psychopath.

At that point, they may conclude it’s time to meet with a professional. For that, the authors provide help too. Like the rest of the book, their advice comes across as experienced, honest, and very practical.

Almost A Psychopath: Do I (Or Does Someone I Know) Have a Problem with Manipulation and a Lack of Empathy

Almost a Psychopath: Do I (Or Does Someone I Know) Have a Problem with Manipulation and a Lack of Empathy

APA Reference
Hagan, D. (2016). Almost a Psychopath: Do I (Or Does Someone I Know) Have a Problem with Manipulation and a Lack of Empathy. Psych Central. Retrieved on February 21, 2020, from https://psychcentralreviews.com/2016/almost-a-psychopath-do-i-or-does-someone-i-know-have-a-problem-with-manipulation-and-a-lack-of-empathy/