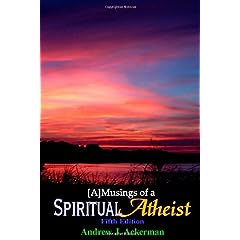 [A]Musings of a Spiritual Atheist by Andrew J. Ackerman is a book about the author’s journey from addiction to recovery.  Ackerman, the self-described hard-line “spiritual atheist,” uses the book to offer his experience with 12-step recovery programs.

As an atheist, Ackerman’s point of view is unique among recovery-oriented and 12-step literature. Many people struggling with addiction don’t try 12-step programs because of their emphasis on a “higher power.” Ackerman also focuses on what he believes are misconceptions surrounding 12-step programs.

I chose to review this book because it was different. I am a Christian. I also happen to have an eating disorder. As part of my treatment, I briefly participated in a 12-step group. Prior to reading this, I never knew that anyone who identified themselves as an atheist ever took part in such a group. I was excited to read about it from a new perspective.

Ackerman does a good job summarizing some of his experience into short, easy-to-digest sections that also are easily to relate to. As someone currently struggling with an eating disorder, I certainly related to his frustration with wanting to stop his behavior, but feeling powerless in doing so. I also greatly appreciated his brutal honesty.  His occasional humor was also a welcomed and unexpected surprise. This is definitely not your average 12-step book. However, he does leave much to be desired.

For one thing, Ackerman never explains the 12 steps themselves. This would confuse a reader unfamiliar with the structure of such programs. 12-step programs take participants through a series of “steps” to aid in recovery. These steps start with admitting there is a problem and seeking support. They end with a commitment both to aid others who are still struggling and to continue carrying the lessons learned through the rest of the participant’s life. Although this began with Alcoholics Anonymous (AA), the general idea has been tweaked many times over to fit everything from drug to sex addictions and more.

This is a book centered around the 12-step recovery model, and I realize that. However, Ackerman spends much of the book praising the program, without even mentioning the many other programs out there. Instead, he sings the praises of the 12-step recovery model as if it is the absolute cure-all for all addictions and mental illnesses. This is simply untrue. If Ackerman were right, there would be no need for any other rehabilitation centers or support groups for addicts and others who are mentally ill.

“No one comes into a 12-step program by the grace of God or with a firm belief in a Higher Power.” Bold statements such as this are common in Ackerman’s book. In the section titled, “God (?)” Ackerman defends his point by saying that addicts worship their drug of choice, not a higher power. While one can see his reasoning, I don’t think a person’s mental health issues translate into having no faith in God.

[A]Musings of a Spiritual Atheist left me conflicted. I liked some of it, while utterly disliking other parts. It was certainly an interesting and thought-provoking read.