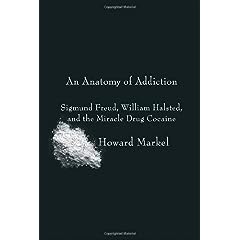 An Anatomy of Addiction: Sigmund Freud, William Halsted, and the Miracle Drug Cocaine

In An Anatomy of Addiction: Sigmund Freud, William Halsted, and the Miracle Drug Cocaine, physician and medical historian Howard Markel, M.D., recounts the story of two geniuses who used themselves as guinea pigs in their research on cocaine.

Sigmund Freud, of course, is widely known as the founder of psychoanalysis, which brought to the surface what had remained largely hidden before his writings: the unconscious. William Halsted, certainly less of a household name than Freud — unless you’re a doctor — was a remarkably skilled surgeon whose tools and techniques revolutionized medicine and are still used today. As Markel writes, “Without fear of exaggeration, it can be said that each man changed the world.”

Given these individuals’ intellectual prowess and outright brilliance, it might come as a surprise that they even started sampling such an addictive substance in the first place. Shouldn’t they have known better?

But it’s not so surprising considering the slim understanding of cocaine at the time, the explosive enthusiasm about its benefits and the vague grasp of addiction in general.

Cocaine burst onto the scene in the 19th century and became big business. French chemist Angelo Mariani created a widely successful cocaine drink, Vin Mariani, which contained ground coca leaves and Bordeaux wine. (A marketing maven, he’d later offer other products with cocaine such as tea, throat lozenges and — if you can actually believe it — margarine!) Everyone from the public to prominent figures (Thomas Edison, Arthur Conan Doyle and Henrik Ibsen to name a few) to politicians (such as President Ulysses S. Grant) to even the pope preferred the cocaine-laced cocktail. As Markel writes:

Around the same time, Pope Leo XIII awarded the Mariani Company a special Vatican gold medal, allowed his face and name to be featured on a Vin Mariani advertisement, and was said to have carried around, under his cassock, a flask filled with the wine that was, “like a widow’s cruse, never empty.”

Cocaine also was hailed as a wonder drug that cured everything from migraines to muscle aches to fatigue to post-surgery pain. Pharmaceutical companies distributed the drug to pharmacists, physicians and patients, and they exaggerated cocaine’s capacity to heal a hodgepodge of health problems. According to Markel, “Unwittingly or not, the medical profession, pharmaceutical companies and too many patients entered into a decades-long toxic relationship with cocaine abuse and addiction.”

In addition to describing how cocaine thrived, Markel details Freud and Halsted’s childhoods and shaky rise to prominence. Freud, especially, had to deal with steep competition and other obstacles like anti-Semitism. Both Freud and Halsted were incredibly ambitious and gifted — and both overlooked cocaine’s highly addictive properties. (Researchers commonly used themselves as guinea pigs in their studies.)

Halsted started studying cocaine because he believed the substance would serve as an effective anesthetic. He began his research by injecting cocaine into his skin and observing its numbing properties. Very soon he and his colleagues were using cocaine for more than science. Markel writes that:

In a matter of weeks Halsted and his immediate circle were transformed from an elite cadre of doctors into active cocaine abusers. Tragically, some of the medical students, resident physicians and surgeons who participated in these experiments were decimated by the drug and died early deaths.

Like Halsted, Freud had helping others on his mind when he decided to research cocaine. He believed cocaine could cure his close friend, Dr. Ernst von Fleischl-Marxow, of his morphine addiction. The more Freud researched, the more he became convinced of cocaine’s amazing abilities to not just cure drug and alcohol addiction and abuse but to ease other ailments including depression, anxiety and aches and pains. After beginning his experiments, Freud, too, started using cocaine recreationally and to self-medicate assorted ailments.

However, unlike Halsted, Freud apparently stopped his “compulsive cocaine abuse” after 12 years, though we may never know for sure because there’s simply no evidence to support either path. Halsted continued to struggle with both cocaine and morphine addiction his entire life, an addiction which seemed to change him from an amiable person to a standoffish and stern recluse. Cocaine left both men scathed and scarred.

An Anatomy of Addiction is a rigorously researched and comprehensive look into the lives of these pioneers who sank deeper and deeper into their addiction. Not only is it a riveting read, but it’s also beautifully written. Markel is a master of language and a great storyteller. He makes history pop from the pages with his vivid prose and detailed descriptions. In short, his nonfiction historical account reads like a good novel. From the Prologue:

On the morning of May 5, 1885, in lower Manhattan, a worker fell from a building’s scaffolding to the ground. A splintered bone protruded from his bloody trousers; a plaintive wail signaled his pain; and soon he was taken from the scene by horse-drawn

ambulance to Bellevue Hospital. A the hospital, in the dispensary, a young surgeon named William Stewart Halsted frantically searched the shelves for a container of cocaine.

An orderly was dispatched to find Dr. Halsted as soon as possible. Running through the labyrinthine corridors of the hospital, he shouted, “Paging Dr. Halsted! Fresh fracture in the Accident Room! Paging Dr. Halsted!” Down one of the halls, in a rarely used chamber, the surgeon was entering a world of mindless bliss. He heard his name but didn’t really care to answer. Yet something, perhaps a reflex ingrained by his many years of surgical training, roused him to stagger out into the hallway and make his way downstairs. The pupils of his eyes looked like gaping black holes, his speech was rapid-fire, and his whole body seemed to vibrate as if he were electrified.

Halsted stepped back from the examination table while the nurses and junior physicians awaited his command, mindful that in a moment bacteria could enter the wound and wreak havoc, perhaps leaving this laborer unable to walk again — or even to die from overwhelming sepsis. To their astonishment, the surgeon turned on his heels, walked out of the hospital, and hailed a cab to gallop him to this home on East Twenty-fifth Street. Once there, he sank into a cocaine oblivion that lasted more than seven months.

The book also is filled with interesting tidbits that illustrate the cultural climate of the 19th century and reveal the various characters that come into Freud and Halsted’s lives and change them forever.

An Anatomy of Addiction is an absorbing, information-packed and beautifully written book that weaves the stories of two brilliant men who never met but struggled deeply with a highly addictive substance and made amazing contributions we still can’t stop talking about today.

An Anatomy of Addiction: Sigmund Freud, William Halsted, and the Miracle Drug Cocaine