Reviews Home » An Unknown World: Notes on the Meaning of the Earth 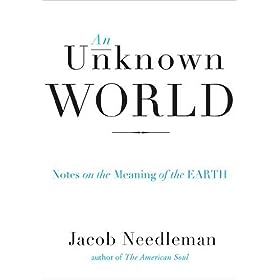 For those concerned about the state of our planet and the lack of a concerted effort to help restore it, here is an exceptional solution — one that suggests a more compassionate population is the route to restoring our home. A win-win.

In An Unknown World: Notes on the Meaning of the Earth, philosopher Jacob Needleman begins by recalling a dream on his 75th birthday: a meeting with his childhood friend Elias. In the dream, as in his childhood, he and his friend wonder together about “god and the stars and the planets, about life and death and the mind” as they sit atop a low stone wall separating neighborhoods. Outside of the dream, the real-life Elias died of leukemia at the young age of 13. Near death, the author tells us, Elias dreaded the loss of learning, while Needleman promised to continue for them both — a commitment to duality that remains significant throughout the book.

In the 1970s, Needleman was one of a team interpreting “The Biosphere,” Russian geochemist Vladimir Vernadsky’s seminal paper on the Earth as a living, dynamic, and integral part of the universe, controlled by life itself — not an accident existing without purpose. Now, in “An Unknown World,” he writes about the planet and its inhabitants, weaving in recurring dream — visits from his childhood friend that prompt him to explore the role of humanity in keeping the Earth viable.

Most of the reveries Needleman recounts are clear, but in some his friend’s words, or his silence, are vague. Elias’s “visits” steer the philosopher toward new discoveries, including, significantly, an understanding that human consciousness is essential in the service of saving the Earth.

In an orderly fashion, Needleman also revisits many of the great thinkers of science, theory, philosophy, theology, and spiritualism. Along with Vernadsky are Plato, Kierkegaard, Harding, Fechner, Ouspensky, and others who spent lifetimes deliberating human conscious and unconscious states. Drawing on these thinkers, Needleman takes us on a spiritual, scientific, and metaphysical exploration of humanity and the planet, articulating the beauty, mystery, contradictions, and possibilities of this epic topic with poetic clarity while acknowledging his unconventional approach to the serious issue of a decaying Earth and our lack of a commitment to do something about it.

Ultimately, the author stresses an intentionally inward effort to learn what the Earth needs from us. It is an effort mirrored by how he uncovers his own revelations: both by the implicit learning derived from his dreams of Elias as well as by what he knows explicitly.

Needelman’s thought process is an eye-opening one, but due to its spiritual nature, any manner of reviewing his book risks scaring away readers. That fear should be put aside, however, as he walks us with clarity through his journey of understanding mankind and Earth as incomplete works that require looking inward as much as outward, using intuition and unconscious routes to reveal the needs of the world within and about us so that all can survive.

The book may still sound daunting, but it is not a hard one to read so long as the reader is interested in our decaying planet. Needleman talks of dualities in science and religion, understanding and consciousness, knowledge and intuition. He speaks deeply and thoughtfully about why humans inhabit Earth. And he stresses an urgency to allow us to “wonder” as we did as children, to use science and religion to not limit but expand our perceptions and liberate the possibilities of our transforming this unknown but evolving planet, to rise above our ego. It is our ego, he believes, that dangerously limits our ability to consciously grasp concepts greater than our current knowledge because it stops us from searching further.

“If our planet is in crisis, as it surely is, it is because we ourselves are in crisis, because we ourselves have lost our way in the world,” he states, adding that to find a “real and not self-deceptive understanding of the crisis of the Earth, we are going to have to find a real understanding of the crisis of our human life, both our inner life of  the mind and the life of action and relationship.”

Needleman’s book is a fascinating pilgrimage toward understanding our role as humans in guardianship of Earth. It deserves all your attention — the payback being never looking at our planet and our beliefs the same way again and in so doing saving Earth through our own redemption.

APA Reference
Stone, J. (2016). An Unknown World: Notes on the Meaning of the Earth. Psych Central. Retrieved on July 5, 2020, from https://psychcentralreviews.com/2016/an-unknown-world-notes-on-the-meaning-of-the-earth/

CPTSD, PTSD and Intergenerational Trauma: We Are in This Together (And 8 Tips for Healing)