Reviews Home » Anger Antidotes: How Not to Lose Your S#&! 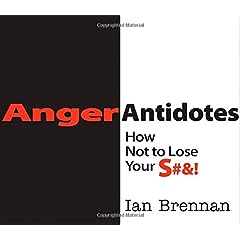 Anger Antidotes: How Not to Lose Your S#&!

When you start reading a new book, it’s with a sense of anticipation.  What can I learn from reading this book? Will the author enlighten me or help me see the world in a new way?  I anticipate that I might not agree with everything, but I’m prepared to find positive aspects.

Unfortunately, the only positive aspect of Anger Antidotes:  How not to lose your S#&!, by Ian Brennan is its attractive layout.  This book is an example of the worst of pop psychology — a mishmash of unfounded assertions, poor writing, and little useful information, with no grounding in research.

The book consists of 41 problems, organized into three parts, with a corresponding antidote for each problem. However, it’s frequently difficult to see what each antidote has to do with the stated problem, and usually the “antidote” isn’t even a solution to the problem. The author explains in the preface that he intends the book to be “as minimal and elemental as possible” and “as a book that one can read quite easily, cover-to-cover, during a single sitting.”  In order to read it, however, you have to wade through pages of opaque writing, aphorisms, and nonsense.

In the first part of the book, universal structures, Brennan discusses fear, emotional immaturity, motivations, and expectations, among other topics.  One of the universal structures he describes is “loss aversion.”  He says that we are “much more motivated by what we can lose than [what] we can gain” and gives the example of how people continue to gamble in Las Vegas even after they’ve lost money, presumably because we hate to lose.  No, that doesn’t make a lot of sense, but then we come to the antidote for this problem.  If you’re afraid to lose, then the best thing to do is to “acquiesce sooner.”  Like most of the problems he describes, it’s difficult to say what that has to do with anger, or even if it’s useful advice.

Emotional immaturity is another “universal structure” which he says can be seen as a problem in Holocaust perpetrators, i.e., “the more violent are the least mature.”  The antidote for emotional immaturity is awkwardly expressed as “with more value placed on knowing what we feel rather than what we ‘think’–or worse yet, denial of what we feel (i.e., the most basic of defense mechanisms)– we can potentially assume increased responsibility for our own conduct and explore a broader range of options for resolutions.”  In other words, Brennan’s antidote is that to become more emotionally mature, we’re supposed to feel instead of think. He fails to give an adequate rationale for this position, nor does he state how we’re supposed to implement his antidote.

Brennan includes many cute phrases in the section on recurring causes of anger.  These are some of his phrases:  perfectionism is imperfect; “enemy” is the enemy; extremes are extremely important; unbounded boundaries; and (out of) control freaks.  One problem that he discusses is the problem of selective compassion, which is something we encounter when someone is too much like us. If you’ve encountered this problem, the antidote is be understanding, patient, and try to let the little things go.

The section on communication includes everything from avoiding I/me/mine messages to three miscommunication hurdles:  listening, comprehending, and believing.  Yes, those are listed as problems, each with its own antidote.  For example, if you have trouble believing what someone else tells you, the antidote is consistency.  No, that doesn’t make sense.

Does the book have any virtues? Perhaps you’ll find a smidgen of value in the appendix, which includes these quotations:  The word might is mighty;  Some, but not all, is almost always the proper sum; and Don’t be mean, but mean what you say.  The appendix includes a table of examples of how to communicate in a neutral way.  For example, to make the phrase “you’re wrong” neutral, you can change it to “that’s wrong.”

Aside from the content and the poor writing, the book is filled with errors.  For example,  Brennan talks about the error of devoting more attention “to the tact” being pursued, using the word tact instead of tack.  He uses the word “absolustic” when he means “absolutist.”  He writes like this:  “By getting the other to express fear–that which the threatener is afraid to express (i.e., the additional layer of fear: fear of fear)–the threatener feels temporarily powerful and less afraid.  But self-defeatingly, the threatener’s own threatening behavior causes others to bolster their counterattacks and, ultimately, the net-effect is even greater fright.”

One of the most revealing statements Brennan makes is that “evidence seems to show that most of us literally do not know what we are talking about most of the time.”  That certainly applies to his book.  Brennan seems to have read widely starting with 1970s pop psychology, and distilled his reading into this book.  Brennan lists his credentials as having given hundreds of talks about anger management.  His experience was gained by working as a “mental health specialist in locked, acute-psychiatric settings.”

Brennan does not claim to have formal training in psychology, nor does he list any licenses.  He does, however, claim that he has worked as a record producer.  You can see snippets of his anger training sessions by searching YouTube for “Ian Brennan anger.”  While he may give adequate presentations (this is difficult to judge based on the short clips available online), it is difficult to understand how Mr. Brennan was able to obtain a book contract.  Yes, his book is really that bad.  In fact, I would go so far as to say that one sure antidote to anger is to avoid reading this book.

Anger Antidotes: How Not To Lose Your S#&!

Anger Antidotes: How Not to Lose Your S#&!

APA Reference
Yanowicz, J. (2016). Anger Antidotes: How Not to Lose Your S#&!. Psych Central. Retrieved on February 22, 2020, from https://psychcentralreviews.com/2016/anger-antidotes-how-not-to-lose-your-s/