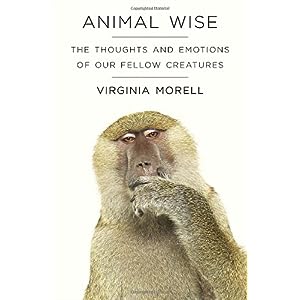 Animal Wise: The Thoughts & Emotions of Our Fellow Creatures

One of my best friends, Valor, a black Labrador, was a genius. My husband set up a video recorder and we saw that Valor waited exactly 60 seconds after the garage door closed before stealing whatever food was on the table. Valor knew that I often forgot stuff and reopened the garage door as soon as I closed it. He also read my body language well. He knew when I needed hugs and pets, and he knew when to leave me alone.

Well, that’s what I “know.” But, what does science know? That’s the premise of Virginia Morell’s book, Animal Wise: The Thoughts and Emotions of Our Fellow Creatures. What do animals know? What do they think? How do they think? And how do we know?

Morell’s book is easy and fun to read. She’s sorted through a great deal of research and talked to scientists galore to make sense of ethology and animal cognition. She was successful: The book is a great and educational read. I imagine any animal lover will love the book. Additionally, I think any psychology or biology major should be required to read it.

Morell discusses the research of and her conversations and visits with the scientists studying ants, fish, parrots, rats, elephants, dolphins, primates, and dogs. I’d seen papers and blurbs on science blogs about the intelligence of birds. I think it was during this last decade that scientists demonstrated that crows make tools. Intelligent elephants aren’t surprising, since “a memory like an elephant” is in our vernacular. I watched “Flipper” as a kid, and I read a lot of science fiction, so I know dolphins are smart. Primates share more than 98% of our DNA, and dogs know the proper time to steal muffins off kitchen tables. None of those critters surprised me. But ants? Fish? Really?

Morell visited a scientist studying tiny little ants, the size of a period on the screen. The scientist and his students had to study the ants under microscopes, and whole colonies lived in Petri dishes. The first thing he and his students did with each colony was to paint three dots on each individual ant so they could tell the ants apart from each other. He showed Morell an experiment where he put another “house” in the Petri dish that met the basic ant requirements. Then he took the roof off their home.

A few ants looked for a new house and found the prepared one. Then, the ants taught other ants how to find the new abode. Once enough ants knew how to get to the new dwelling, they started picking up their comrades and carrying them to the new place. The teaching process showed that the ants did more with their neurons than previously thought—and these critters don’t even have spines.

Fish are at least vertebrates. Spitting fish was another scientist’s area of research. The fish could learn new ways to hit targets. They even seemed to play a game of spitting on the humans.

The research on the other animals Morell discusses wasn’t nearly as surprising, but it was equally amazing. Apparently, some primates have eidetic memories. That is, they see in pictures. Because of that, they can perform some memory tasks much better than humans can. This rubbed some people wrong, so they had people practice, and yes, with practice humans can get almost as good as the chimps.

Why do we think that we need to be better than other animals at every task? That was another one of Morell’s themes in the book. Each species has evolved to be good in its niche. We humans don’t need to outperform chimps on bizarre memory tests, just as we don’t need amazing accuracy when we spit. Why do we feel like we have to be the best? Why are some humans bothered by the idea that other species have theory of mind?

Speaking of feelings, Morell also talks about emotions and the question of whether or not animals feel like we do. One scientist pretty much proved that rats could laugh. Another study showed that rats will forgo a treat if it will save their friend some pain. A researcher demonstrated that young rats look forward to “play dates” and get excited when they get to play with their friends. Elephants remember the sounds made by deceased members of their clan, and they react upon hearing them. They also show more interest in elephant bones than in other bones, and they shore more interest in the bones of elephants they knew than they do in the bones of elephants they didn’t know.

Morell gives examples showing us what all animal lovers know: Animals think and animals have feelings.

The City of Boulder, in Colorado, rewrote their laws to change some wording. In Boulder, you don’t “own” animals. Instead, you are “guardian for” animals. Many people thought Boulder went a little over the top with that legislation, but after reading Morell’s book, I don’t think they did. Individuals who can laugh, play, make tools, remember events and others from decades past, and outperform others on memory tests shouldn’t be owned. We should cherish and love them, not possess them.

Are you doubtful that animals deserve guardianship? Read Morell’s book. I bet you’ll change your mind.

Animal Wise: The Thoughts and Emotions of Our Fellow Creatures

Animal Wise: The Thoughts & Emotions of Our Fellow Creatures

APA Reference
Nicodemus, G. (2016). Animal Wise: The Thoughts & Emotions of Our Fellow Creatures. Psych Central. Retrieved on May 26, 2020, from https://psychcentralreviews.com/2016/animal-wise-the-thoughts-and-emotions-of-our-fellow-creatures/