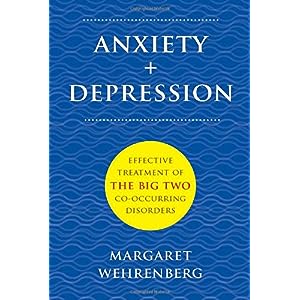 If you know anyone with anxiety or depression, you know that symptoms can be complicated. Even more complicated is that the two disorders have similar features. That makes diagnosis hard for many clinicians, no matter how seasoned they may be. And if that weren’t enough, the fact that the disorders can co-exist adds another layer of difficulty.

As psychologist Margaret Wehrenberg makes clear in Anxiety + Depression, clinician and patient alike can have trouble deciphering what’s what. In her guidebook aimed at practitioners, Wehrenberg sets out to illustrate just how perplexing the two disorders can be and to provide help for distinguishing between them. She also argues that their overlap begs for further research and attention.

As a therapist, I know that one of the biggest challenges is to make sure that a client is being treated for the most life-altering concern they are struggling with. Another is to ensure that they are receiving the correct medication for the correct diagnosis. All of this becomes trickier when there are two possible diagnoses. Would you want to be treated for depression when you actually struggle with anxiety? Would you want your therapist to focus your sessions on anxiety when your most pressing symptoms stem from depression? Of course not.

Wehrenberg explains that depression often includes rumination or repeated thinking about negative events that a person believes they cannot change. With my own clients I’ve learned that depression’s negative thinking is often a cognitive distortion. This can include generalization (when you generalize one negative experience and believe it can happen again), all-or-nothing thinking (“If I don’t pass this exam I’ll become a failure”), and should statements (“I should always look good”).

Meanwhile, anxiety, though it may contain some similar thoughts, often features negativity that is more fleeting. For example, an anxious person’s thoughts may look something like this: “If only Tuesday would hurry up and get here so I can see what my ultrasound looks like, I would feel less worried.” Thoughts of anxiety, as Wehrenberg points out, often subside temporarily once an anticipated event passes. With depression, negative thinking doesn’t seem to subside.

The disorders also affect mood differently. For example, someone who is depressed often feels like there is no hope for a better life. On the other hand, a person who is anxious may not feel this way on a daily basis, but may begin to feel this way when they are faced with their anxiety. Here again, the line between symptoms is thin.

As Wehrenberg discusses, treatment can prove an especially hard task when a person does not think they need help. Many individuals believe that if their circumstance changes, so will they. Locus of control is a theory researched by Julia Rotter in 1954 and further studied by many other psychologists after her. It concerns the extent to which people feel they have power over events in their lives.

Building upon Rotter, Martin Seligman developed what he termed “learned helplessness” to describe what happens to some patients: the feeling that they have no control over their own fate. A woman who has suffered from depression for years may believe that her depression would subside if she could just get a better job. The problem here is that in focusing on a better job, an external situation, she may not see the issue as an internal one to work through. As Wehrenberg writes, “Most people will not put effort into psychotherapy if they believe the rest of the world causes their problems.”

Still, the issue is not as simple as internal versus external. Wehrenberg makes it clear that there are multiple reasons for depression and anxiety and that it is important to consider all of them. She points to physical health, levels of mental energy, and readiness to change.

Overall, two key themes emerge in the book. The first is the need to identify learned helplessness, as well as anhedonia and hopelessness. The second is the realization that there are anxious, panicky clients who may also have depression, but whose anxiety dominates all other symptoms.

If you’re a mental health practitioner who wants to get better at differentiating between these two disorders, Wehrenberg’s explanations and case studies may help.