Reviews Home » Apocalypse Not: Everything You Know About 2012, Nostradamus and the Rapture is Wrong 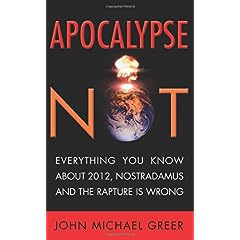 Apocalypse Not: Everything You Know About 2012, Nostradamus and the Rapture is Wrong

Back in 2010, students at the high school where I taught began telling me, without the least bit of skepticism, that the world was going to end in 2012.  I’d reply, “No, it isn’t” and perhaps bring up the example of William Miller who predicted that the world would end in the 1840s. As a Christian, Miller closely examined Biblical scriptures to come up with his prediction, but managed to ignore the Biblical verse which says that no one can know the day or hour when Christ will come again (an inconsistency experienced this year by Harold Camping, who also predicted the end of the world based on his interpretation of Biblical scriptures).

What is the psychological appeal of the idea of apocalypse?  Sure, we’re all going to die, but why have humans persisted in believing what Charles Strozier and Katharine Boyd say “requires the end of the human experiment, or the death of everyone”?  In Apocalypse Not, John Michael Greer provides an overview of the idea of apocalypse in human history. Greer begins by expressing the need for monotheistic religions to explain how an omniscient and all-powerful God can allow evil in the world.  He says that with polytheism, you don’t have to explain evil–you can just blame it on another God.  With monotheism, Greer says that the explanation has to change so that our world, “in which evil and suffering exist, is a temporary, ramshackle structure, and will sometime very soon be replaced by an eternal, perfect world in which evil and suffering will have vanished forever.”

When you look at the breadth of apocalyptic prophecies included in the book, you realize how much these visions have affected humanity throughout recorded history.  Prophecies range from the return of dead warriors, such as King Arthur, to the return of missing gods, such as the Aztec belief that Quetzalcoatl would one day return.  Greer describes today’s Shiite Muslims as originating in a mystic belief that the twelfth imam would return.  Prophecies range from interpretations of Revelation to those of Nostradamus to the Harmonic Convergence and the Y2K crisis.

In discussing interest in the Mayan prophecies of end times (which invariably are accompanied today by photographs of the Aztec sun calendar), Greer says that they are based on misinterpretations by one of the first Mayan researchers, Sir Eric Thompson, “who has been proven wrong by new advances.”  Greer explains that now, when we can read “over ninety-five percent of all Mayan texts” we can find only one mention of the date December 12, 2012, which in Mayan is 4 Ahau 3 Kankin 13.0.0.0.0.  Greer describes this as “one passing reference on one stela at one minor Mayan site” (recently, Mexican experts revealed that there is another reference to the date, but interpretations vary on whether it refers to the past or future, and experts decry modern interpretations that they describe as having  “twisted the cosmovision of ancient civilizations like the Maya”).

Greer discusses both religious and secular visions of apocalypse, ranging from the Ghost Dance movement among native Americans in the United States to Karl Marx’s theory that the rise of the proletariat would lead to a worker’s utopia.

What will happen in 2012?  As Greer says “….today’s believers in a 2012 apocalypse have let themselves be drawn into buying the comforting fantasy that the world around them will suddenly and cataclysmically be replaced by a new world more to their liking…”  Of course, the earth will end, as will humanity.  Greer describes the end of the sun, billions of years from now when “the sun’s core will pass a critical threshold and start fusing helium; the resulting “helium flash” will blast a third of the Sun’s mass into deep space in a matter of minutes.  In all probability, whatever charred cinder remains of the Earth at that point will be blown to smithereens by that blast…Countless millions of years before that happens, it’s a safe bet that humanity will have gone extinct.”  As Greer says, “In the real world, everything eventually comes to an end.  Worlds perish in stellar fire, species go extinct, civilizations decline and fall…” but belief in an apocalypse is “an evasion of those facts, an attempt to pretend that they don’t apply to us.”

The author’s biography includes the statement that Greer is a “presiding officer of a contemporary Druid order, the Ancient Order of Druids in America.”  This knowledge made me initially wary about the content of his book.  However, Greer’s easy-to-read writing style, the list of resources he includes, and even the structure of the book persuaded me that his perspective on apocalypse is worth considering as an introduction to the topic.  When I fact-checked some of his interpretations, my modest efforts didn’t find any glaring errors.

As for those less-than-skeptical high school students back in 2010?  One of the apocalypse believers agreed to watch the TED Talk, Rives on 4 a.m. Afterward, he said, “I get it.”  Our minds see patterns where none exist; our desire to live beyond this life, to explain evil, and to live in utopia lead us both to believe in nonexistent conspiracies and to desire an apocalypse that will bring about a new world.  That doesn’t mean that an imminent apocalypse will really happen.

Apocalypse Not:  Everything You Know about 2012, Nostradamus, and the Rapture is Wrong

Apocalypse Not: Everything You Know About 2012, Nostradamus and the Rapture is Wrong

APA Reference
Crook, J. (2016). Apocalypse Not: Everything You Know About 2012, Nostradamus and the Rapture is Wrong. Psych Central. Retrieved on November 26, 2020, from https://psychcentralreviews.com/2016/apocalypse-not-everything-you-know-about-2012-nostradamus-and-the-rapture-is-wrong-2/