Reviews Home » Approaching Neverland: A Memoir of Epic Tragedy & Happily Ever After 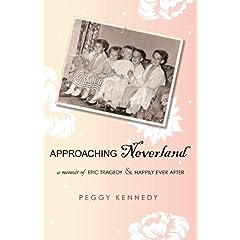 Approaching Neverland: A Memoir of Epic Tragedy & Happily Ever After

In the 1960s, when author Peggy Kennedy grew up, mental illness was a family secret. It was whispered about, handed off to hospitals, restrained, subjected to electroshock therapy and slews of sedatives and sent back home, when appropriate. Peggy Kennedy knows this all too well because her mother suffered from schizophrenia (her diagnosis was later changed to bipolar disorder) during a time when little was known about the disorder and crude treatment was the only option for reducing symptoms and restoring sanity.

Approaching Neverland: A Memoir of Epic Tragedy & Happily Ever After tells the story of Kennedy’s mom and the entire family — her father, two brothers, Glenn and Patrick, and two sisters, Joan and Sue. I read this book in one weekend. Correction: I devoured it. I fell in love with this family and their triumphant and tragic stories. Approaching Neverland is beautifully written, and a genuine page-turner and emotional rollercoaster — and that’s for the reader.

It opens with a 5-year-old Kennedy getting ready for her first day of school, desperately wanting her mom to help her, but Mom, according to her dad, needs rest today. During class, though Kennedy tries hard to be well-behaved and proper, one of the nuns pulls her aside, and takes her to the girl’s bathroom to brush the knots out of her twisted and tangled tresses. After the nun tells Kennedy to simply remind her mom if she forgets to brush her hair again, Kennedy’s eyes well up with tears. She yearns to tell the nun, “My mommy’s sick and they might take her away.” But she holds back, remembering what her brothers had told her: Don’t tell anyone anything about their mother.

And so begins a messy journey into Kennedy’s childhood, a childhood stained with secrecy, shame and growing up too fast. One of the messiest — and potentially fatal — moments occurs when Kennedy’s mom decides that instead of going to school one morning, all the kids would go to Neverland to see Peter Pan. Thanks to the actions of a concerned neighbor, however, Kennedy’s family is saved, and her mom is taken to the hospital, just one of the many hospitalizations her mom and family will endure.

Kennedy also addresses the stigma of mental illness, which is still, unfortunately, all too prevalent. Four decades after the events in Approaching Neverland, society has yet to react to mental illness in the same way — and with the same empathy — as it does to physical illness.

Having a mom at Napa State Hospital wasn’t like when my classmate Marie’s mother had gotten sick in kindergarten, and we all had made pretty cards for her. No one ever asked us how our mother was, or ever offered to say a prayer for her to get better. Mental illness scared people. If you had it, you didn’t admit it. If your mother had it, you prayed that no one would find out. But everybody knew about my mother. I heard whispering at school, and sometimes kids would stop talking when I walked up to them.

Fortunately, we’ve begun to better understand how to treat mental illness. In her book, Kennedy gives readers a glimpse into the earlier crude treatments.

I learned later that she had electroshock treatment twice a week. Promptly at 7:30 a.m. treatment patients were herded, begging, pleading, crying, and resisting into the gymnasium and seated around the edge of the room…

One attendant stood at the head of the table to put the rubber heel in the patient’s mouth so he couldn’t chew his tongue during the convulsive stage. On either side of the table three other attendants held him down. After the electroshock, patients were given a heavy dose of Thorazine, which made them so foggy-headed and zombielike that they needed help with bathing and eating, and they had to be escorted around the hospital grounds.

As a mental health writer, I was struck by Kennedy’s portrayal of her mom, Barbara. In many books, TV shows and movies — even today — individuals with mental illnesses are depicted as one-dimensional. Their disorder is intertwined with their identity. It becomes, “Oh, she’s a schizophrenic,” or “he’s an anorexic.” The illness overshadows a person’s personality, talents and other traits.

Kennedy’s book, however, shows a complete, three-dimensional person, who, yes, suffers from mental illness, but also is loving and creative, has a great sense of humor and cares deeply for her family. Moreover, despite what many think about schizophrenia or bipolar disorder, Barbara was a strong, resilient and multifaceted woman. In fact, during many instances, she becomes the family’s rock.

As Kennedy learns to deal with her mother’s mental illness, she gains various insights into how life must’ve been for her mom (also no doubt great lessons for readers). One lesson she learns after the family dog has passed away:

She turned. She’d been crying—something I’d never seen her do. Anything Mom did out of the ordinary made me worry. I watched her eyes.

“He’s gone, Peg.” Joining her on the floor in tears next to Pogo’s still body, I realized that Mom also existed outside my anxiousness; that she was a real human being with a wide range of emotion. Mom never yelled unless she was heading for a breakdown…But what if, on that first day, Mom was simply having a bad day and being testy? Didn’t she have the right to express how she felt without everyone analyzing her tone while they worriedly studied her eyes? How many times had she held back her emotions for fear of being carted off to Napa [State Hospital] or Agnews [Insane Asylum], or at the very least, of alarming us kids? It can’t be comfortable to have your family always watching to see if you’re going crazy again.

But this story isn’t just about Barbara Kennedy. It’s also a journey through the lives of the entire Kennedy clan, including Peggy Kennedy. Because I don’t want to spoil the book, and reveal the details of each family member’s lives, I will say that the family has to cope with life-threatening illnesses, tragic losses, affairs, broken relationships and the trials and tribulations of growing up and finding one’s place in the world.

There are no labels, no clichés and no stereotypes. Instead, readers will find a beautiful and heart-wrenching story about a family who deals with their struggles as a family with unwavering and unconditional love. This book is truly an inspiring and mesmerizing must-read.

Approaching Neverland: A Memoir of Epic Tragedy & Happily Ever After