Reviews Home » Are We Getting Smarter? Rising IQ in the Twenty-First Century 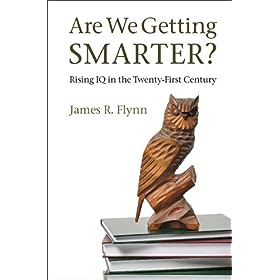 Are We Getting Smarter? Rising IQ in the Twenty-First Century

In his latest book, Are We Getting Smarter?, James R. Flynn tackles serious debates. Flynn is a psychologist, professor, and author of 12 books — most notably Where Have All the Liberals Gone? (Cambridge, 2008) and, the precursor to this book, What Is Intelligence? (Cambridge, 2007). He is influential in his field; the trend he previously identified, of IQ gains over generations, is now known as the “Flynn Effect.”

Flynn’s previous book, What Is Intelligence? Beyond the Flynn Effect, closely studies the effect itself as well as its significance both historically and socially, and finally tries to understand these IQ gains and suggest a “new theory of intelligence.” While Are We Getting Smarter? is not simply an updated version of What Is Intelligence?, it is based on the ideas presented there: Flynn includes a summary of the earlier book in one of his opening chapters. For those who have read the earlier work, this is especially interesting. As Flynn writes, “when a book is condensed, connections emerge that were not so clear in the lengthy original.”

In Are We Getting Smarter?, Flynn meticulously analyzes IQ research to help demonstrate how IQ scores affect our understanding of major issues such as the death penalty, the diagnosis of memory loss, the distance between Western adults and teenagers, the debate over genetic or environmental factors on gender and race performance on IQ tests, and the “cognitive trends in both the developed and the developing world.” These societal issues are divided into chapters where Flynn examines research studies and cases that highlight the importance of how IQ results are understood. For example, he looks at the significance of accurately measuring IQ when it is a factor in deciding if a felon can be given the death penalty. He particularly highlights the pertinence of norming IQ scores, and the dangerous effects of ignoring this part of the assessment.

Each chapter begins with a well-crafted paragraph that explains how particular areas (gender, age, death penalty, politics, etc.) are affected by IQ scores and, most important, how those IQ scores are interpreted. The author also carefully outlines the points he intends to prove in each section. These outlines are extremely helpful as they serve as a structure for the ample research presented. Flynn is articulate and thorough as he looks at a wide array of study results — as well as what the proper interpretation can tell us about various aspects of our society.

While I found Flynn’s book fascinating, readers should be warned that this is not light reading. Everything is dutifully researched and there is a large amount of statistics — wonderfully helpful if you are doing research of your own, but potentially overwhelming to those looking for simple answers or a quick read. I would also suggest looking to his opening chapter, as he provides detailed but brief descriptions of each following section, so you can tune-in to your specific interests first. (He does, however, reference arguments in other chapters, so there is much benefit to reading straight through.)

Flynn asks poignant questions and works hard to provide clear, thorough, well-researched answers. He infuses cold statistics — like full-scale IQ gains on various IQ tests or the estimates of IQ gains per year — with real-life meaning and adds to sociological discussions on some of today’s most pressing topics. This is a very worthy read by a leader in the field — again, especially useful for those working in it.

And, in case you’re simply dying to know Flynn’s answer to the question in his title, I will leave you with the opening lines to his book. He writes: “Are we getting smarter? If you mean ‘Do our brains have more potential at conception than those of our ancestors?’ then we are not. If you mean ‘Are we developing mental abilities that allow us to better deal with the complexity of the modern world, including the problems of economic development?’ then we are.”

But the answers aren’t that simple. Flynn goes on to approach another question posed by scholars: that of whether or not we’re getting more intelligent. To find out, you’ll have to read the book.

Are We Getting Smarter?: Rising IQ in the Twenty-First Century

Are We Getting Smarter? Rising IQ in the Twenty-First Century

APA Reference
Tomasulo, D. (2016). Are We Getting Smarter? Rising IQ in the Twenty-First Century. Psych Central. Retrieved on August 9, 2020, from https://psychcentralreviews.com/2016/are-we-getting-smarter-rising-iq-in-the-twenty-first-century/