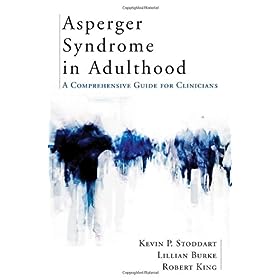 Despite widespread awareness of the disorder, many still think of Asperger Syndrome as being largely confined to children. This is a myth. Dispelling it is the central aim of the new book, Asperger Syndrome in Adulthood: A Comprehensive Guide for Clinicians.

Written by Kevin Stoddart, Lillian Burke, and Robert King, Asperger Syndrome in Adulthood is written for individuals within the field. While this does not diminish the utility of the book, it does limit its appeal.

Asperger Syndrome in Adulthood is written by academics for academics. It’s not light beach reading. That said, the information contained inside is useful for anyone looking to better understand the disorder. It is a solid starting point for learning about Asperger Syndrome.

A quick look at the three professionals’ resumes shows that they are highly qualified to write this sort of book. Stoddart is the founding director of The Redpath Centre and an adjunct professor at Factor-Inwentash Faculty of Social Work at the University of Toronto. Burke is a psychologist and the assistant director at The Redpath Centre. King has worked for more than two decades with multiple interdisciplinary teams supporting individuals with intellectual disabilities. He is also a consultant for several health centers, services and agencies.

Asperger Syndrome is not a new disorder, even by modern standards. However, its label is relatively new. The authors write:

“Reflecting our belief that individuals with social differences have always existed, it is acknowledged by most professionals that recognition of individuals who have problems interacting socially existed before the identification of the syndrome by Dr. Hans Asperger. Despite different names, very early papers by Schneider (1923), who discussed ‘affectionless psychopaths,’ and by Ssucherewa (1926; Wolff, 1996), who described ‘schizoid personality in childhood,’ provide evidence of this.”

Asperger Syndrome, like most disorders, has been around for quite some time. However, it has always been viewed through a murky lens. Even with a label attached to it, the average person still does not know what to make of it.

Autism resides on a spectrum, and anyone afflicted with Asperger Syndrome displays varying degrees of intensity. Since it is commonly mentioned in connection to children, many people do not fully appreciate how it can affect adults.

The first chapter introduces the disorder, as well as other Autism Spectrum Disorders found in adults. The second describes an assessment for Asperger Syndrome, and the third gives a lengthy overview of relevant mental health symptoms. The next four chapters build on what is discussed in the first three, getting more technical and potentially going beyond the interest levels of non-professionals and non-academics.