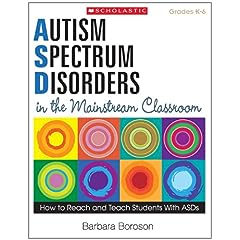 Barbara Borosonʼs Autism Spectrum Disorders in the Mainstream Classroom: How to Reach and Teach Students with ASDs is an engaging, thoughtful and valuable resource for instructors, parents and administrators that enable them to reach, understand and help students with autism spectrum disorders (ASDs) so that they may succeed in school.

Barbara Boroson holds an undergraduate degree in creative writing from Cornell and a masters degree in social work from Columbia University.  She has worked in autism spectrum education for 20 years in clinical, administrative and advisory capacities. She currently works as a consultant and supports teachers and school districts as they integrate their students on the spectrum into mainstream environments.  Her stated goal is in the development of inclusive classrooms where all students can learn and grow.

Her writing is clear and accessible. It gives her readers an understanding of the complexity of ASD by using concrete examples and provides the instructor with the tools and techniques that help steer students towards success.  Autism Spectrum Disorders in the Mainstream Classroom: How to Reach and Teach Students with ASDs is highly recommended for all instructors and families wishing to teach and better understand individuals with ASDs.

The autistic spectrum, also called autism spectrum disorders is characterized by widespread abnormalities of social interactions and communication, as well as restricted interests and repetitive behavior.  The ﬁve forms of ASD are classic autism, Aspergerʼs syndrome, Pervasive Developmental Disorder Not Otherwise Speciﬁed (PDD-NOS), Rett syndrome and Childhood Disintegrative Disorder.  The number of reported cases of autism increased dramatically in the 1990s and early 2000s.  This increase is largely the result of changes in diagnostic practices, availability of services and public awareness, although current research shows that unidentiﬁed environmental risk factors cannot be ruled out.

Classic autism is a disorder of neural development and affects information processing in the brain by altering how neurons and their synapses connect and organize in ways not yet well understood.  While autism has a strong genetic basis, the genetics are complex and it remains unclear whether any of the disorders in the spectrum are explained more by rare mutations or rare combinations of genetic variants.

Controversies surround other proposed environmental causes of ASD, such as pesticides, heavy metals or childhood vaccines, but no convincing scientiﬁc evidence has been presented for any of these proposed causes.  Borosonʼs work is valuable in that it offers tested preventive strategies that cooperatively build a classroom setting that includes students with ASDs.

Boroson begins by deﬁning and explaining many of the terms and acronyms encountered while helping students across the autism spectrum.  She gives us the ill-deﬁned and yet textbook characterization of ASDs stated by the U.S. Department of Health and Human Servicesʼ Center for Disease Control and Prevention Autism Information Center (2009):

[Autism spectrum disorders] include autistic disorder, pervasive developmental disorder-not otherwise speciﬁed (PDD-NOS, including atypical autism), and Aspergerʼs Syndrome. These conditions all have some of the same symptoms, but they differ in terms of when the symptoms start, how severe they are, and the exact nature of the symptoms. The three conditions, along with Rett Syndrome and childhood disintegrative disorder, make up the broad diagnosis category of pervasive developmental disorders.

She points out this deﬁnition is remarkably consistent with the similarly befuddling explanation found in the current version of the APAʼs (American Psychiatric Associationʼs) Diagnostic and Statistical Manual (DSM) IV (1994).  Boroson clears away this confusion by writing, “In my work, I have encountered many children on the autism spectrum whose precise address along the spectrum is unclear or inconsistent.  And what Iʼve discovered is that the name of their diagnostic subtype does not dictate the details of their functioning, education or identity.”

Borosonʼs understanding, that sees each student as a unique human with his or her own strengths and weaknesses, patterns of action and reaction, potential and dreams, provides her book with multiple, detailed and realistic strategies that gives a deeper understanding of ASDs and thereby makes it a valuable reference.

Boroson holds off discussing the presentation of curriculum to children with ASDs until the last chapter and presents to us ﬁrst several preventive and responsive strategies.  As she says, “Preventive strategies will be the most important tools in your box, both philosophically and practically.  They will guide you toward thinking in a proactive, positive way.  They will help you keep the heat down and keep problematic situations from occurring and recurring.  Thatʼs important because once a cycle of reaction has begun, it can be especially difﬁcult or truly impossible to recover the day for your students on the spectrum.”

Her strategies enable the instructor to look past the behavior of students with ASD to see what triggers their anxiety or anchors their comfort and to incorporate these unique speciﬁcs into the classroom.  For example, by using information gained from families, counselors and previous teachers instructors may prepare a toolbox that contains individualized afﬁrmations, calming cues, and comfort objects that offer support and aid for the self-regulation of students on the spectrum. She looks at the many contextual challenges a student with ASD faces that involve anxiety, sensation, socialization, engagement, regulation, organization and communication and offers several strategies that can be tailored for these individuals.

Barbara Borosonʼs Autism Spectrum Disorders in the Mainstream Classroom: How to Reach and Teach Students with ASDs engages the reader with a well-thought-out discussion of how unique individuals on the autistic spectrum differ in their abilities and how these differences may be incorporated in reaching them and teaching them.  Her work is lucid and illuminates parts of my own life with students and friends with ASDs.  I highly recommend that her book be read cover to cover and kept as a reference on the bookshelf of anyone wishing to bring about Borosonʼs stated goal of developing inclusive classrooms where all students can learn and grow.

Autism Spectrum Disorders in the Mainstream Classroom: How to Reach and Teach