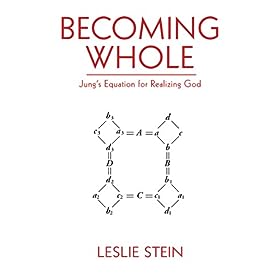 Many people have moments in their lives when they experience “wholeness” and are filled with a complete sense of peace and joy. Everything seems “right.”

Many of these people claim that these moments are proof of a higher power, such as God or Allah.  C. G. Jung refers to these moments as feeling the presence of the “Self.”  “Becoming Whole: Jung’s Equation of Realizing God” is an in-depth examination of the equation that Jung created to explain how the “Self” arises in each person and how that fits with the concept of God.

It is important to mention though that Jung’s equation should not be taken as proof of the existence of God.  Jung stated that it proves “only the existence of an archetypal God-image, which to my mind is the most we can assert about God psychologically.”

Leslie Stein studied with Jungian analyst Rix Weaver and deeply researched the Jung equation to prepare for examining this challenging concept. He not only dissects Jung’s complex equation, but also Stein points out the similarities and differences between it and other spiritual theories.

Stein devotes almost one fourth of the book to explaining Jung’s equation for the transformation within the Self.  To those unfamiliar with it, this might seem like a lot of ink to devote to an equation.  However, this equation is not as simple as say x + y = z.  Jung claims that this complex process takes place within each person and is necessary for the Self to become conscious.

An important aspect is that it is circular.  Jung states that the circular movement “has the moral significance of activating the light and dark forces of human nature, and together with them all psychological opposites of whatever kind they may be.” Stein points outs out the similarity between the movement of Jung’s equation and the circling within the Buddhists’ mandalas as well as the Bible’s “wheel” in the vision of the prophet Ezekiel.

Stein breaks down pieces of the equation to more thoroughly explain how Jung viewed it.  One particularly interesting aspect is including nature as part of the spirit or “Self.”  Including nature as essential to spirituality can be seen in various religions and faiths, such as Wicca or Gnosticism. Jung was concerned with the gap between spirit and matter, which he believed was widened by Christianity’s de-spiritualizing of nature.

Stein explains that Jung used theories and practices from Gnosticism and alchemy to solve this issue, attempting to bridge the gap and join spirit and nature again.  Stein claims that this is the “basis for and the object of the equation.” Jung wanted to show how by becoming more aware of the split between the spirit and the material world, the God-image or “Self” would become stronger.

Stein then delves even deeper in the pages of “Becoming Whole” by comparing Jung’s theory to the ideas of others.  One interesting comparison focuses on the three stages of the alchemical process drawn up by Gerhard Dorn.  Stein is very thorough and concise as he weighs the two theories.  For instance, the second stage of the alchemical process posited by Dorn is the “Reunion” of the spirit with the body.  Jung’s equation sets out a similar stage marked by “C”, also known as “Paradise.”  “C” is the point in Jung’s equation when the God-image emerges, because it has begun to recognize itself.

Becoming Whole also makes comparisons with works dealing with the transcendental God.  Stein compares and contrasts Jung’s equation with the Jewish mystical texts of the Kabbalah. Stein’s comment about the two: is that the “Kabbalah has the same goal as the equation: to use the emanations as the means to come closer to God or the Self.” Although the processes within Kabbalah and within Jung’s equation are different, the end result is the same.

Becoming Whole is very well researched and clearly written, it is not for the average reader. It’s written for scholars. It is a valuable resource for research about Jung and his equation for realizing God. The writing style is advanced and intended for an audience that is comfortable reading scholarly works.

That being said, I would not recommend this book for anyone looking for spiritual guidance or inspiration. With my experience of earning a degree in religious studies and years of personal research, I found this book to be very rewarding. I am very happy to add it to my collection of religious and/or spiritual analyses and texts.