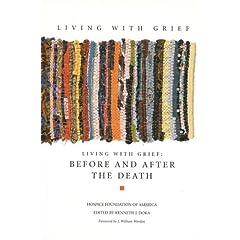 Before and After the Death – Living with Grief Series

In their book, Before and After the Death, part of the Living with Grief series, the Hospice Foundation of America tries to provide caregivers and clinicians alike tools to help patients during the dying process. They also discuss how to grieve a patient’s death.  Along the way they present much relevant research relevant on dying and grief from several renowned investigators and include valuable resources both for consumers and professionals.

The processes of dying and grief often pose more questions than answers.  Various factors affect the way individuals experience grief and mourning. Although the terms often are used interchangeably, Before and After the Death distinguishes grief from mourning by explaining that grief can be viewed as ‘the emotional reaction to a loss’ while mourning can be seen as the ‘efforts to manage the grief.’  The authors take great efforts to explain terms, illustrate key points through candid personal accounts from caregivers, and cite valuable research from the literature to form a strong foundation for the text.

Disenfranchised grief and complicated grief are two concepts discussed at length. Doka (1989, 2002), one of the many contributors to the book explains disenfranchised grief as grief that is not acknowledged, such as the loss of an ex-partner, supervisor or pet.  In other words, individuals cannot grieve as they would like because the relationship with the deceased might not be recognized or socially accepted.  Social support and the option to mourn publicly are not acceptable.  Cultural norms, as with many areas of life, dictate how, if at all, the person will be able to grieve.  This type of grief seemed to be a central theme in the book.  By taking a look at the individual, their culture, sexual orientation, religious views, etc., one can determine whether the person will be able to complete proposed tasks in the grief and mourning process.  Concepts such as ‘anticipatory grief’ and ‘anticipatory mourning’ are used to denote the feelings, thoughts and behaviors that take place before an actual loss is experienced.  Ideas related to the involvement of the family and the communities are also highlighted as approaches for increasing the likelihood of healthy grieving.

Complicated grief is being discussed as a potential new diagnosis to be added to the next revision of the Diagnostic and Statistical Manual.  Criterion proposed by the authors for the diagnosis of complicated grief includes: “1- Persistent pining for the lost person; 2- A period of six months or more should have elapsed since the bereavement; and 3 – the syndrome should seriously impair the sufferer’s ability to function in occupational and domestic roles and responsibilities.”  The person’s functioning is said to be significantly impaired by rumination of the circumstances of the loss, reliving the loss, and symptoms of depression and anxiety.  The current debate discusses whether this should be added as a diagnosis of its own or added under the umbrella of anxiety disorders since it is similar to post-traumatic stress disorder.  The authors do an adequate job of presenting research on both sides of the debate – a refreshing effort on their part.  Preventative measures and implications for treatment of complicated grief are also discussed.

The book offers many potential treatment options for clinicians and hospice workers.  Techniques are presented both for use with individuals and their families.  Journaling, letter writing, and life reviews are but a few of the techniques proposed.  It is important to note the authors consider several different relationship dynamics such as mother-daughter dyads, different cultural groups such as gay men, and age groups, such as the elderly.  Essentially the authors are careful to include a great variety of populations in their text.  Areas with a need for additional research include how adult sons react to parental los, dynamics of lesbian, transgendered, and questioning dyads in the process of dying, and specific consideration of different cultures, such as the Hispanic family, which comprises a large portion of the United States population.

One area of the text that leaves the reader with additional questions is the portion on adult sons’ reaction to sibling and parental loss. It appears more information is available regarding mothers and daughters.

As a whole, Before and After the Death does a remarkable job of carefully presenting how the patient’s background, their social network, the caregiver’s role in the dying process, and reactions to each other’s grief are integral in the positive healing of everyone involved. Each chapter highlights significant contributions by clinicians and researchers in the field while interweaving stories from survivors of loss.  The text both provides solid clinical material as well as intersperses the opportunity to take a look at the human aspect of the experience.

Living with Grief: Before and After the Death

Before and After the Death – Living with Grief Series

Belky Perez Schwartz is a licensed mental health counselor in Florida. She is currently in private practice and specializes in helping clients facing multiple losses, living with chronic medical illness, the impact of the Internet and gaming on daily living, and relationship issues faced by the LGBTQ population.

APA Reference
Perez Schwartz, B. (2016). Before and After the Death – Living with Grief Series. Psych Central. Retrieved on September 24, 2020, from https://psychcentralreviews.com/2016/before-and-after-the-death-living-with-grief-series/