Reviews Home » Disorders » Eating Disorders » Before The World Intruded: Conquering The Past And Creating The Future 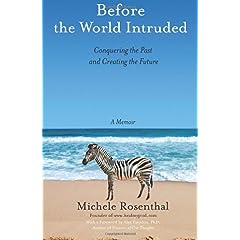 Before The World Intruded: Conquering The Past And Creating The Future

Michele Rosenthal’s memoir, Before The World Intruded, is the story of her struggle with a life-threatening illness and the trauma it created.

Rosenthal shares her battle with Stevens-Johnson Syndrome (SJS), leading us from her diagnosis at age 13 through 24 subsequent years of psychological repercussions. Rosenthal recounts the story of how she fought for years to overcome her PTSD, and managed to slowly climb her way out of a serious case of depression and anxiety, experiencing a rebirth along the way. Ultimately this results in a remarkable tale of personal strength and post-traumatic growth.

The book is divided into four sections: ‘Shock;’ ‘Confusion;’ ‘Clarity;’ and ‘Healing,’ with each of these representing a different stage in Rosenthal’s journey. The first, ‘Shock,’ describes Rosenthal’s life ‘before the world intruded’ – the innocent childhood cut short by the onset of her terrible illness. ‘Confusion’ and ‘Clarity’ cover her emotional journey in coming to terms with this trauma, and ‘Healing’ describes her eventual recovery and return to happiness.

Not only is Johnson one of the 0.5 people per million to suffer from SJS, but in her case it also develops into its most extreme, life-threatening form, Toxic Epidermal Necrolysis Syndrome (TENS).The symptoms of this are a form of blistering so serious that Rosenthal has to be treated in a hospital burn unit. She recounts the condition’s sudden onset with such excruciating accuracy and vivid attention to detail that you may find yourself wincing as you read about the unbelievable pain she had to endure. Rosenthal recalls meeting the hospital psychiatrist, and being unable to put her experience into words at the time:

I did not tell her how drastically I felt changed. I did not say out loud that I was trying to suppress the memory of a pain so intense it defied words. I could not explain that I was struggling not to be overwhelmed by a staggering number of new fears and feelings, nor even the latest fear: that I had survived the physical onslaught only to be outdone by the emotions in its wake.

Indeed, it is these subsequent emotions which later cause Rosenthal to become disconnected from the rest of the world. She survives a near-death experience, and then sinks into a state of deep depression, anxiety, insomnia, and eating disorders.

Rosenthal shares the following quote from Dr. David Biro’s memoir One Hundred Days: My Unexpected Journey from Doctor to Patient:

Doctors love a good zebra. Patients with rare, exotic diseases. We crowd around to see them, touch them, photograph them. We put them on display at conferences. We write their stories in journals. We do all this, I suspect, because they reawaken the spirit that first pushed us into medicine: a fascination with the human body, its incredible achievements and its terrifying failings.

It is this idea of an “exciting zebra” for the medical community that Rosenthal most strongly identifies with throughout her struggle. She reluctantly adopts this as her identity, labeling herself as a “medical anomaly, alone, a freak.”

Eventually, 16 years after her initial diagnosis, and following countless fruitless attempts at a cure by her doctors, Rosenthal decides to seek a different kind of help. She arranges to see a psychotherapist, named Greg. It is this work with Greg, and an introduction to transcendental meditation, that signals a change for Rosenthal: She talks about her experiences for the first time and begins to discover her true voice, escaping the fearful clutches of her Ego voice. Remembering her college days, Rosenthal writes that “[W]riting was good for me. It gave me a focus outside my physical discomfort and limitation. It gave me something in which to bury the emotional angst I carried and also a place to explore how and when and why to find language and choose words.”

As her sessions with Greg evolve, Rosenthal recalls that:

I became more of a full self: I defined boundaries, learned how to communicate, and started more consciously mulling the question, ‘What do I want?’… I made a list of twenty-two things I was afraid of. At the top of the list: ‘I am afraid of myself.’ And yet, I wanted more and more to become myself. Writing seemed to be the path to that connection.

She begins to make significant progress, and to feel in control of her life, so Rosenthal terminates the sessions with Greg. But another onset of the illness sparks a relapse into her depressed state, as she is once again forced to resign herself to the role of patient, or ‘zebra.’ It is this relapse which finally triggers the turning point for Rosenthal, as she fully acknowledges the fear she has lived with – and denied – for so long. She decides once and for all to “reclaim myself,” with Greg’s help:

We break through the fear to a point where I begin to imagine for myself a different life than the invalid one I am used to. This happens oh, so slowly, but I hear the machinery grinding in my head. I fantasize I could be her, the girl of such vast energy I glimpsed for just a moment in the hospital. I imagine myself strong and free and vibrant and healthy and able to succeed without enduring the pitfalls of illness. One day, walking along the beach I feel myself as I would like to be: happy, unafraid, able to live without looking back, a strong source of joyful vitality.

Crucially, through her ongoing therapy sessions, and by reading two life-changing books – Joan Didion’s ‘The Year of Magical Thinking’ (a parent’s perspective of a child’s grave illness) and Elizabeth Wurtzel’s ‘More, Now, Again: A Memoir Of Addiction’ – Rosenthal realizes just how important her writing is to her, and how it can offer her a solution to her problems:

Socrates wrote that language is ‘an activity that moves the soul towards definition.’ Words can deliver us from our solitude, or deepen it. They are our most specific form of translating what exists in a heart through the landscape of a mind. I have always used language as a fence, as a guardrail against truth, definition, and exposure. So often my words have cloaked my self in disguises designed to ensure anonymity. Or, the lack of words has kept me separate from even myself. Recently, however, I sense the ability to use language in another way. I begin writing poetry again, starker poems and more to the point, writing more directly than ever about the aftereffects of illness and its consequence on identity… I begin to feel safe… I understand the problem has been that I never acknowledged my past and then came back to the present. Instead, I have lived in the trauma and run away from myself in every moment. It is time to sit still.

This will certainly sound familiar to anyone who has ever studied the concepts of Narrative Therapy, and it is ultimately — through her writing, a discovered love of music and dance, and a new identity – that Rosenthal finally overcomes the trauma of her illness and truly achieves happiness. At the end of the book she states that:

I can describe myself as if TENS never happened: I am a dancer, I am a writer, a creator, a lover, a partner, a daughter, a sister, a friend. I am a dog owner, a Floridian, a beachwalker, a homeowner. I am a joy seeker. I am a believer in my self. I have conquered the past. Now, I am creating my future as a woman who is connected, strong, and free.

Notably, Rosenthal is many things, but she is no longer a ‘zebra’.

Today Rosenthal works as a post-trauma coach, using the wisdom gained from her own experiences to help others, and employing the philosophy that “we can’t always find meaning in our trauma, but we can learn to make meaning come out of it.”

This is an honest, triumphant story of personal courage in the face of adversity, and will undoubtedly help anyone who has ever dealt with the effects of trauma or illness. At one point in the book, Rosenthal states that “Writing seems like the only thing that can save me,” and I am grateful that it has. Rosenthal is a survivor, and hopefully her story will help many other victims of PTSD work toward their own recovery and post-traumatic growth, finding happiness and a new sense of identity along the way.

Before the World Intruded: Conquering the Past and Creating the Future, A Memoir

Before The World Intruded: Conquering The Past And Creating The Future

APA Reference
Walters, S. (2016). Before The World Intruded: Conquering The Past And Creating The Future. Psych Central. Retrieved on January 20, 2020, from https://psychcentralreviews.com/2016/before-the-world-intruded-conquering-the-past-and-creating-the-future/