Reviews Home » Being You, Changing the World 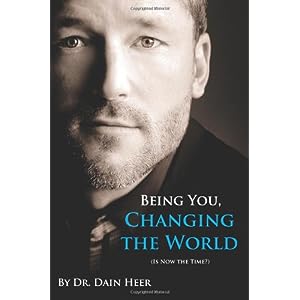 So you’re having a bad time of it. Well, perhaps you should “demand of the Universe: Either my life completely changes or I am out of here.” If you are truly serious, then plan for your ousting. “I even set a date, 6 months in the future. I gave the Universe a deadline,” writes Dain Heer.

Sound too risky? Not ready to give the Universe an ultimatum? (Smart move, methinks.) But that’s precisely what Heer, author of Being You, Changing the World, did — and he claims it worked for him. “Literally a week later,” he writes, “I found something that changed my entire life: Access Consciousness.”

First, a caveat: I by no means recommend that you follow suit by bartering with the Fates and threatening to off yourself unless you get your way. Most likely, you will not win the lottery, you will not lose 40 pounds in a week, and you will not meet your mate while sitting on the couch watching reruns of Charmed, do read Heer’s book.

So, what is this Access Consciousness that turned Heer’s life around? He describes it as “an energy transformation modality which links seasoned wisdom, ancient knowledge and highly contemporary, pragmatic tools for change. Its purpose is to create the possibility for there to be a world of consciousness and oneness.” The idea is to use your personal energy and thought processes as a means to change the world in which you live. To do this, Heer tells us, the reader must be ready to embrace total change in thought and lifestyle. In short, a deconstruction of the current way of thinking and an invitation to embrace the ideology that surrounds entitlement. Yes, per Heer, all are entitled and worthy and infused with enough latent personal magic to transform the world.

Access Consciousness was first articulated by Gary Douglas in 1990 and is based largely on the power of meditation. Meditation has been around for eons, is tried and true, and has been, more recently, scientifically proven to be effective.

Yet although it may be interesting to read a more decent book on the subject of how an ancient practice can be leveraged in such tangible ways, this particular text is beyond difficult to read. Not only because of Heer’s manic writing style and fragmented thought processes, but because of his overuse of exclamation points!!!!!!, repetitive italics — you see what I mean I mean it really is annoying isn’t it don’t you see don’t you see?????!!!!, and general disregard for proofreading.

Here’s a taste of Heer’s prose style lest you think I’m being overly harsh:

Now, My Friend, Please Ask Yourself:

Is there an impact you’re being in the world around you that is far greater than you’re actually able to acknowledge right now? And is it even greater when you — even if it is just for some seconds say, “Screw the rules of this reality. I’m having my reality now.”

Why? Because in those 10 seconds you are willing to be magic.

Ticktock. Ticktock. MAGIC EXISTS! AND YOU ARE IT! NOW.

If you were able to decipher Heer’s intent sans IRRITATION, then congratulations!!!!! If instead you remain perplexed and puzzled, rest assured that you are not alone.

Supposedly, we should feel sorry for the author, a former successful and appropriately confident chiropractor who “had it all” but still “felt lost.” But Heer reminds me of a myth from old about a boy named Narcissus. (Seriously, when you plaster a close-up of your face on a book-cover, it’s going to give some readers pause.)

But I digress. Cleverly, Heer writes in his introduction that “because this book is designed to create change, it will probably confuse or annoy you at times.”

It’s not the attempt to effect change that is annoying, but so many other aspects of the read. It’s the ranting and raving and clipped pace and cheap attempts to piggyback on other popular self-help tomes like The Secret and Ask And It Is Given. Heer lacks, among other things, the feel-good mystical pull that Rhonda Byrne was able to so effectively conjure in the former. And again, that’s disappointing, as the concept of Access Consciousness in and of itself has many positive things to offer: self-reflection, confidence-building, empowerment, and so on. It just needs a much better delivery.

So if you admire poorly written and frantically paced self-help books that try to conjure the inner god without basis in history, fact, or even the allure of mysticism, then this is a book for you.

If, on the other hand, you value your precious life moments and would prefer to dedicate free time to something more enlightening, then, please, by all means, don’t read this book. Might I instead suggest you crack open The Secret — or, better yet, some Greek mythology.

APA Reference
McCann, K. (2016). Being You, Changing the World. Psych Central. Retrieved on October 28, 2020, from https://psychcentralreviews.com/2016/being-you-changing-the-world/