Reviews Home » Better By Mistake: The Unexpected Benefits of Being Wrong 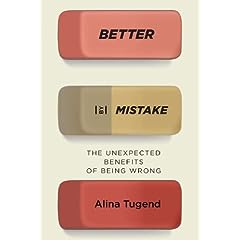 Better By Mistake: The Unexpected Benefits of Being Wrong

Intellectually we know that making a mistake gives us the opportunity to learn and grow. Still, that usually does little to assuage our shame, embarrassment and guilt when making an error. Of course, it depends on the size and significance of our mistake. But as a society, we dread mistakes. And as a whole, our mistakes tend to get punished.

Seasoned journalist and author Alina Tugend writes about this inherent tension between “what we’re told” about mistakes (e.g., they help us learn) and the typically punitive reality (e.g., being harshly reprimanded or even fired from a job) in her book Better By Mistake: The Unexpected Benefits of Being Wrong.

In it, Tugend presents a slew of studies on mistake-making along with anecdotes and insights from top experts. The book is made up of eight chapters. In chapter 1, Tugend defines mistakes, which is “almost as difficult as, well, defining happiness,” she writes. Chapter 2 explores how our society socializes kids to fear and avoid mistakes and how we can cultivate resilient kids who aren’t paralyzed by errors. Chapter 3 covers mistakes on the job, such as Wall Street’s big blunders and how companies can create an open — instead of a punitive — environment. Chapter 4 delves into mistake-making in medicine, the challenges of reducing mistakes in this environment and what’s worked. Chapter 5 looks at the lessons learned from mistake-making in aviation and how these lessons can help us with mistakes in other areas of life. Chapter 6 tries to figure out how the sexes cope with mistakes. Chapter 7 examines how different cultures view mistakes, namely looking at the differences between North American and Asian countries. Finally, the last chapter tackles one of the toughest phrases for most people to say aloud: “I’m sorry.”

Better By Mistake is a fascinating and well-researched read. But it isn’t bogged down with abstract concepts and jargon. Tugend presents the research in an engaging and easy-to-understand manner. She describes several studies in great detail, so readers get a good idea of how these experiments were conducted. She breaks up research-heavy sections with anecdotes and real-life analogies. She also uses a conversational tone throughout the book.

For instance, one of the reasons why we’re so hard on ourselves and others when making a mistake is because of the “hindsight bias,” which Tugend writes is “the tendency to examine the mistakes from outside the tunnel, where we can clearly see every twist and turn, every possible problem, and observe where every road leads. How different that is from being in the tunnel, where we have to make split-second decisions, perhaps based on faulty data and unclear directions, often while we are stressed or scared.”

Tugend uses the example of how her Jewish father didn’t leave Germany until 1939. She and others have questioned his family’s decision to stay so long when to people today, it’s blatantly obvious that they should’ve left much earlier. She writes:

“Well, of course, we see the 1930s in Germany as an inexorable march to the gas chambers. But if you were living there at the time, as my father was, things were not so obvious. His family was forced to relocate to another part of town, but it certainly was not clear that things were going from worse to worst. My father still played soccer with his friends, he still had a child’s worries. The perspective of his family was that Germany was a civilized country that they had lived in and loved for generations, and that it was momentarily going through a dreadful period. How could they even imagine a Holocaust? It took my grandfather moving to England for a job in 1937 and seeing the full horror to insist that his wife and children leave. He was outside the tunnel, while they were still in it.” (p. 19)

The book is filled with interesting anecdotes from history. For instance, in the chapter on apologizing and accepting accountability, Tugend shares an anecdote about Franklin Delano Roosevelt. In Pittsburgh, Roosevelt gave a “blistering speech” against Herbert Hoover and promised to cut federal spending by 25 percent. When his speech writer approached the new president about the dramatic decrease he had promised just four years earlier, Roosevelt famously said: “I know. Deny we were ever in Pittsburgh.”

Also, Tugend draws many insights that readers will be able to apply to their own lives, whether that concerns their personal approach to mistakes or their roles as employee, boss or parent. For instance, in chapter 2, Tugend describes research that states that it isn’t important to build kids’ self-esteem but instead to help them cultivate resiliency. Resiliency, Tugend writes, is “how well a child can from recover from the inevitable ups and downs” of life. How kids view and react to mistakes is key to their resiliency. It’s important for kids to view tough situations as challenges that they can work to overcome, instead of stressful experiences to avoid at all costs. Kids who aren’t resilient “see themselves as overall losers and failures rather than as having difficulty in one particular are of their life.” These kids also rely on unhealthy coping strategies such as quitting, blaming and denying responsibility.

However, some of the sections can read like common sense or truisms. For instance, in the chapter on workplace mistakes, Tugend writes:

“…We need to be able—and this is a really tough one—to think more in the long term and less in the short term, to not always see failure as a waste of time, but sometimes as a risk that can lead to success. We must really look at our own and others’ efforts and accomplishments and not let reputations—good or bad—rest solely on past deeds. And finally, we need to man up and take real responsibility when things go wrong, rather than mouthing insincere platitudes or ignoring the problem altogether…” (p. 106)

Also, the subtitle, “The Unexpected Benefits of Being Wrong,” is somewhat misleading. I don’t think that anyone is all too surprised by the idea that mistakes lead to learning opportunities and growth. (It’s really our society’s emphasis on performance and perfectionism that creates a fear of making mistakes.)

However, Tugend does include surprising information that can help us with how we deal with mistakes, such as Japan’s emphasis on having teachers not correct students’ mistakes for several weeks. This helps students understand the consequences of their incorrect approach and why it’s ineffective. Tugend writes:

“The expectation, according to [psychology professor] Stigler, is that by focusing on the mistakes and why students make them—rather than simply telling the students that they’re doing the problems incorrectly—they will not simply attain a superficial knowledge of math, but truly understand the underlying concepts.”

Overall, Better By Mistake is a well-written book with fascinating research and anecdotes. It doesn’t skim the surface but instead takes a thorough look into our fear of mistakes, alleviating that anxiety and minimizing mistakes. If you’ve read other books on blunders, you might be familiar with the research and examples. But if you’re new to this topic, it will no doubt be an eye-opening read. Undeniably Better By Mistake provides a solid argument for changing our perspective on mistakes and the punitive environments we’ve created.

Better By Mistake: The Unexpected Benefits of Being Wrong

APA Reference
Tartakovsky, M. (2016). Better By Mistake: The Unexpected Benefits of Being Wrong. Psych Central. Retrieved on January 27, 2020, from https://psychcentralreviews.com/2016/better-by-mistake-the-unexpected-benefits-of-being-wrong/