Reviews Home » Better Than Normal: How What Makes You Different Can Make You Exceptional 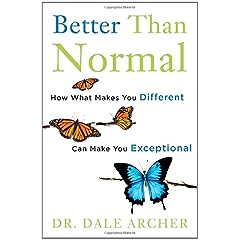 Better Than Normal: How What Makes You Different Can Make You Exceptional

Sometimes the title of a book is so intriguing that you can barely contain your eagerness in wanting to begin reading it.

Such may be the case for you as well with Better Than Normal:  How What Makes You Different Can Make You Exceptional.  This offering from Dr. Dale Archer, a board-certified psychiatrist and distinguished fellow of the American Psychiatric Association, will change the way you look at “the box called normal.”  Dr. Archer states that he is “… driven to spread an empowering new message about mental disorder that places responsibility for identity and mental health back where it belongs – in your hands.”

The message Archer delivers in Better Than Normal is indeed new.  For each of eight fundamental behavioral traits he identifies, he then assigns another term that conjures up far more positivity than the terminology assigned by the Diagnostic and Statistical Manual of Mental Disorders (DSM). If you have been diagnosed as having ADHD, wouldn’t you rather be seen as “Adventurous”?  How about those with a diagnosis of social anxiety disorder or generalized anxiety disorder?  Wouldn’t the terms “Shy” or “Hyper-Alert” elicit more hope on a patient’s horizon?  A diagnosis of being bipolar or schizophrenic could paralyze someone’s hope for recovery, but what if you were, instead, referred to as being “High Energy” or as a “Magical” thinker?

Also looked at through a new lens is OCD (Perfectionist); histrionic personality disorder (Dramatic); narcissistic personality disorder (Self-Focused).  Dr. Archer provides a continuum model for these traits from 0 to 10, with 0 representing that the trait is absent; 5, the trait is dominant; and 10, the trait is superdominant.  Because a great many of us have these traits in varying degrees, he suggests that we stop looking at them as negative and see, instead, their positive aspects.  Prior to reading the book, he suggests completing the eight questionnaires in the Appendix to determine your own personality’s dominant traits.

“Ascendant strengths” are identified for each trait and is where the positive spin on diagnosis and treatment really comes into play.  I can only imagine someone’s surprise at being diagnosed with one of these disorders and then their subsequent elation at being told that there are not only strengths inherent with the disorder, but that you can use them to your advantage.  Gone would be the person’s perceived stigma of having a mental disorder.  For his book Dr. Archer interviewed people whose acknowledgement and employment of the ascendant strengths of their disorders have helped them be successful in their lives.  All names in those stories have been changed, with the exception of one.  Marc, who is bipolar, requested that his real name be used as he “puts himself and his story in the public eye every day to live his message and destigmatize mental illness.”  Dr. Archer defines him as a “model of what it means to live and be successful with a diagnosis” and a reason he was invited to be included in the book.

In the chapter on social anxiety disorder, we learn that anxious people sometimes use alcohol (referred to as a “social lubricant”), marijuana, or tobacco to help with their social phobia.  In one woman’s story of her addiction to alcohol, she tried Alcoholics Anonymous meetings but disliked the group setting – remember, she is shy – found the meetings depressing, and she just was not “a joiner.”  Using her ascendant inner strength, she overcame her alcohol addiction by an intentional shift in her mindset to one in which alcohol was poisonous, and then supplemented that mindset with hypnosis tapes, prayer, and books.  It would be interesting to know what advocates of Alcoholics Anonymous think about this approach, especially since she was able to overcome her addiction to alcohol without attending meetings or having a sponsor.

Better Than Normal has its roots in the group theory of evolution, according to Archer:

…because humans live in interdependent groups, evolution has favored the kind of personality specialization that we’re talking about.  When one person is particularly adventurous, for example, or especially well organized, or an exceptionally charismatic leader, everyone else in the group benefits.  But when we seek out diagnoses and medications so that we can stuff everyone back into the box called normal, we stifle the full range of human diversity.  As individuals, our potential for personal satisfaction decreases.  As a group – as a society – we suffer.

Rest assured that Dr. Archer is not saying that medication no longer has a role in treatment and should be thrown by the wayside.  However, when it comes to treating these disorders he is asking that we also look at them in a new and different way, with a view that may fall outside of what we think of as normal.  Whether you are the one diagnosed with a mental disorder or you are treating someone with such a diagnosis, the treatment approach in Better Than Normal could be the catalyst for beneficial change in the lives of many.

Better Than Normal:  How What Makes You Different Can Make You Exceptional

Better Than Normal: How What Makes You Different Can Make You Exceptional

APA Reference
Klein, T. (2016). Better Than Normal: How What Makes You Different Can Make You Exceptional. Psych Central. Retrieved on February 26, 2020, from https://psychcentralreviews.com/2016/better-than-normal-how-what-makes-you-different-can-make-you-exceptional/