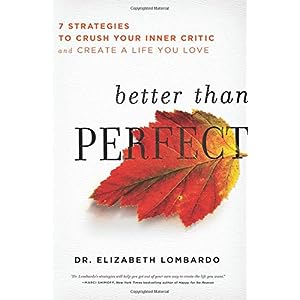 Better than Perfect: 7 Strategies to Crush Your Inner Critic

Do you beat yourself up for not meeting your own high standards? Perhaps you try to avoid failing — even in small ways — at all costs. You brush off praise, while actually craving it. You constantly judge yourself.

If so, you may well be a perfectionist. That’s not entirely a bad thing, Elizabeth Lombardo concedes in her new book, Better Than Perfect, but still, you can do a lot better for yourself.

Take Lombardo’s 30-item quiz and you can see just how much of a perfectionist you are. (The assessment is not scientifically validated, though, so consider the results an educated guess about your perfectionist tendencies and not a definitive statement.)

Lombardo sets readers straight on what perfectionism is and what it is not, what’s good about it and what’s not so good. Then she follows through on the promise in the subtitle of her book, offering seven strategies to help demolish that critic in your head.

Lombardo’s approach to helping people become better than perfect is based on the principles of cognitive behavior therapy. She wants to show us how to recognize our most counterproductive ways of thinking and behaving — and then teach us how to replace these thoughts and actions with something more useful.

The book is filled with exercises and worksheets and a can-do attitude. Don’t expect to be inspired to think in deep or complex ways about your long-standing motivations or recurring patterns of relating to other people. This isn’t depth psychology.

It is, though, a fun read, quick and easy through all 384 pages. Although I have my criticisms, I think it is a book that can benefit just about everyone. The kinds of errors in thinking and acting that undermine perfectionists are not specific to them; lots of people get tripped up by the same fallacies, myths, and ruts.

The how-to section of the book is about getting out of your own way. Lombardo names her seven strategies so that they spell out P.E.R.F.E.C.T. “P,” for example, stands for “Postmortem your past.” By that, Lombardo means that you should reinterpret your past so that you can learn from it and neutralize its power to hurt you.

In separate chapters on each of the strategies, Lombardo shares examples from her therapy practice, her own personal experiences as a perfectionist (or perhaps, a recovered perfectionist), exercises for reframing your past, and tips (such as journaling). She sprinkles quotes throughout, such as “Turn your wounds into wisdom,” from Oprah Winfrey.

Working her way through the letters of her acronym, Lombardo urges you to “Evaluate your expectations,” “Reinforce new roads,” “Fail forward,” “Eliminate extremes,” and “Create, don’t compare.” The last chapter is called “Transcend.” Transcending, Lombardo writes, “is exactly what being Better Than Perfect means: rising above the old ways we have limited ourselves with perfectionism, triumphing over our negative inner critic, and going beyond to a place of love rather than judgment.”

The fearful person is motivated by endless worries: What if I’m wrong? What if other people judge me and make fun of me?

Passionate people, on the other hand, love what they are doing. Setbacks and criticisms do not deter them. The passionate approach to work and to life is by far the more healthful and empowering one.

Amidst all of the book’s useful advice, however, are examples that are just too simplistic. Consider this tip: “If you picture it, it will come.” As evidence, Lombardo mentions Fergie from The Black Eyed Peas, who “visualized getting a Grammy Award, which she, along with her hip-hop group, eventually achieved — eight times!”

I could become the world’s most devoted visualizer, but I am never going to win a Grammy.

“What you believe, you will achieve” is similarly silly. You can tell a team full of aspiring gymnasts to believe that they’ll become Olympic champions, but probably none of them really will, no matter how ardently they believe.

Perhaps because this is a self-help book rather than literary nonfiction, the writing can be disappointingly repetitive. The phrase “stick a microphone in your brain” pops up at least four times. And the question “Can you relate?” appears more than thirty times.

My greatest disappointment, though, was with the narrow range of people Lombardo addresses in her tips and illustrations. When she reaches for examples, she often finds parents and couples. All of the parents are married and all of the couples consist of one man and one woman.

The tip “Mom, take care of yourself,” for example, includes this suggestion: “…spend one-on-one time with your husband.” What about the many, many moms who do not have a husband?

A tip for single people is similarly disappointing. It is not about living your single life to the fullest. Instead, it reads, “Being happy attracts great partners.” Fortunately, Lombardo does qualify this with the phrase “If you are single and want to be in a relationship,” thereby acknowledging, if implicitly, that not all single people have the goal of attracting partners. Still, the focus is on a very normative, paired-off life. One that many of us do not wish to lead.

In one of Lombardo’s examples, a husband comes home from work, gets changed, and sits on the couch to relax. The question is whether you should give him a kiss, sit with him, and ask him about his day, or criticize him for sitting down while you’re making dinner.

Seriously. I had to check the copyright page to see whether the book was published in 2014 and not 1950.

Even the married heterosexual parents whose lives are taken most seriously in the book do not seem to be multifaceted human beings. Lombardo does not paint them as having layered lives in which they try but fail, or in which they struggle to come back from failure again and again. Those are the people you find in books such as Harriet Lerner’s The Dance of Anger. But in Lombardo’s world, success usually comes quickly. Follow the tips, do the exercises, and if you are still having trouble, reread the relevant chapter.

For many readers, this is exactly what they want to hear. I have no doubt that for some, it really will work.

Better than Perfect: 7 Strategies to Crush Your Inner Critic and Create a Life You Love

Better than Perfect: 7 Strategies to Crush Your Inner Critic

Bella DePaulo is the author of How We Live Now: Redefining Home and Family in the 21st Century and Singled Out. Before she started studying single life, she published many articles on the psychology of lying and detecting lies.

APA Reference
DePaulo, B. (2016). Better than Perfect: 7 Strategies to Crush Your Inner Critic. Psych Central. Retrieved on September 24, 2020, from https://psychcentralreviews.com/2016/better-than-perfect-7-strategies-to-crush-your-inner-critic/