Reviews Home » Beyond Blame: Freeing Yourself from the Most Toxic Form of Emotional Bullsh*t 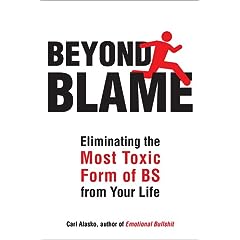 Author Carl Alasko’s previous book, Emotional Bullshit, was well-received, and it is not hard to see why.  His new work, Beyond Blame: Freeing Yourself from the Most Toxic Form of Emotional Bullsh*t, provides a perspective on both intra- and interpersonal relationships that has the power to change a life.  Dr. Alasko explains how blame has come to form the foundation of unhappiness, the solutions available, and why it is even pervasive enough to affect our view of ourselves.

Part One is entitled “Where Blame Comes From and How It Works,” and serves as an introductory lesson in the causes and effects of blame.  According to Dr. Alasko, there are two functions of blame, “find[ing] fault with another person or group” and “transfer[ing] responsibility onto someone else,” both by using criticism, accusation, punishment, and humiliation.  We then use these behaviors for one of four reasons: 1) to change someone’s behavior; 2) to vent a feeling; 3) to escape personal responsibility; and 4) to protect ourselves (p. 6, 8).  He addresses, in turn, why blame is so destructive, false beliefs about its potential for good, how we can turn blame onto ourselves, and how blame is sometimes disguised as false sympathy or sarcasm.

A second section in Part One deals with blame’s origins as part of the human fight or flight instinct.  It is posited that blame can be traced to our roots as social creatures, as a way of protecting one’s status within the community.  The negativity of blame can also be greatly increased when it escalates to the level of nations, and can ultimately result in war or genocide, as seen with the Holocaust.  Part One, then, is an overall introduction into the pervasiveness and destructive extent of blame, with the goal being to live Beyond Blame, which is described by Dr. Alasko as “live[ing] without criticism or accusation” (p. 87).

Part Two, “Learning to Use Positive Accountability,” details the solutions one can use in place of blame.  With the caveat that it takes two to be successful in eliminating blame and that one can’t be forced to do anything, let alone change their behavior, Dr. Alasko emphasizes that learning to be less emotionally reactive and using a 4:1 ratio of thought to feeling has a much higher chance of success.  The use of respect and consideration in this Positive Accountability approach effectively neutralizes the power of blame and allows for productive and mutually satisfactory communication.  He defines the practice of this method:

“1) To thoughtfully acknowledge an error, your own or another person’s, and consider how to repair it, if necessary.

2) To express an emotion, or a need, without using criticism, accusation, punishment, or humiliation, with the goal of not triggering negative emotions.”  (p. 107)

Because our intimate relationships, both romantic and familial, have the most potential for blame-ridden interactions, the majority of Part Two is devoted to these situations.  Dating is an area fraught with misunderstanding and misleading intentions, and for this Dr. Alasko posits two solutions: The Three Basic Guidelines of Dating and the Law of Lessons Learned.  The Guidelines include: Everything Counts (meaning actions, words, behaviors—not just first impressions), Show Me the Proof (especially concerning three “dealbreakers”—availability, finances, and addictions), and finally One Date at a Time, which serves to focus attention on proceeding slowly, rather than jumping into life decisions after a week (pp. 139-140).  The Law of Lessons Learned, which is emphasized throughout the rest of the book, is a “defense against self-blame,” meaning that just because we make mistakes sometimes doesn’t mean we should beat ourselves up for them forever.  The law states: “Every mistake contains a lesson.  Make a note of the lesson, process the accompanying emotion, and move on with your life.” (p. 152)

Marriage is the subject of the longest chapter in Beyond Blame because “…blame thrives in environments in which commitment and obligation are crucial…” (p. 159).  Luckily, the solutions laid out by Dr. Alasko are actually quite simple, provided that both parties have positive intentions and are willing to change. The “perennial secret to a happy marriage,” then, is living Beyond Blame (p. 191).  The parenting chapter is an extension of this view, with the additional note that parent-child relationships must be based in a shared set of Core Values as a compass for appropriate behavior.  Parents must recognize their Parental Power, but also must use it for thoughtful discussion and engagement rather than dictatorial edicts (p. 197).

The final section of Part Two concerns blame in the workplace, and how it compares and contrasts with blame in our intimate relationships.  The two main points Dr. Alasko raises here are: 1) it has been empirically proven that positive work environments, absent of blame, increase productivity; and 2) there is a mistaken belief that work is a zero-sum game, i.e. if you win, I lose.  By aiming toward the former goal and correcting the latter attitude, work becomes both more pleasant and more efficient (p. 214, p. 216).

Part Three is organized around the “Law of Personal Limitations,” an “advanced” take on the psychology of blame.  It reads as follows:

“Everyone is always doing as well as they can within their personal limitations, their personal history, what they know and don’t know and what they’re feeling in that moment.  If they could make a healthier decision, they would.  This includes YOU.” (p. 236)

This law, then, forms the basis for forgiveness and understanding of both yourself and others.  Dr. Alasko walks the reader through each phrase, and points out evidence showing that one’s current attitude, expectations, and beliefs do have a powerful effect on thought, emotion, and ultimately behavior.  He is not saying, however, that this law should be used to justify self-indulgence or as an excuse for bad behavior.  Instead, support is drawn from philosophical, psychological, and practical foundations to explain the difference.

In total, Beyond Blame is one of the most enlightening self-help tomes this reader has ever come across that is simultaneously easy to apply in a practical way.  Not only does Dr. Alasko explain ideas that repeatedly elicit the reaction, “Wow, I never thought of it that way,” but techniques for implementing this newfound outlook successfully are detailed step by step.  Specific anecdotes are presented and dissected sentence by sentence as well as from both participants’ viewpoints, which is much more helpful than the broad generalities found in many similar relationship-oriented books.  Using blame as the centerpiece for emotional interactions, too, is a creative and rarely used approach.  The world of psychology as a whole rarely deals directly with blame, and Beyond Blame is a refreshing addition to its library (p. 25).

The concepts are so intriguing, in fact, that it begins to get frustrating at some point during Part One, when Dr. Alasko is going over all of blame’s background, causes, and effects.  The insights, which can approach revolutionary for one who has never viewed through this lens before, inspire the need to find solutions to the problems blame poses NOW rather than after three more chapters of emphasis on its destructiveness.  Dr. Alasko does recognize this urge, and addresses it at the beginning of Chapter Six, explaining that a complete foundation is essential to fully understanding the solutions posed later.

The only other hesitations that this reader has are minor: sometimes the names and capitalization conventions that the author uses are odd and even silly, e.g. “Blame Trap” and “Emotional Impact.”  Finally, in the dating section, some people might be put off by the overwhelming emphasis placed on rationality as the most important factor in evaluating a prospective partner.  This reader, however, found it refreshing and a recipe for success, being that our society in general can get too wrapped up in the passion of it all to make what, especially in hindsight, are the right decisions.

Beyond Blame’s strengths are in the deceptively simple goals and solutions it puts forth, such as “5×5 exercise,” which is just two partners taking turns fully listening to each other, five minutes at a time.  According to Dr. Alasko, this “can bypass the (perceived) need to use blame in a couple’s communication by creating a place where each can safely express their thoughts and feelings” (p. 187).  The message is ultimately that something seemingly so difficult to achieve is in fact eminently possible with a bit of effort.

A final example of how a simple message can be incredibly powerful is in the Law of Lessons Learned, essentially that “…everyone will eventually make an error in judgment.  We all make mistakes (p. 152).”  It’s hard to accept this, as well as the Law of Personal Limitations, at face value, but that’s the point.  If we could see the truth of these concepts easily, we would already be avoiding a lot of pain.

The last chapter of Beyond Blame pulls everything together wonderfully, using six instructional stories to further illustrate many of the previously described concepts and methods.  Dr. Alasko also reminds the reader that “not every incident will reach a conclusion satisfying for both parties, because the other person’s intention may be to not solve the problem.” (p. 289)  This crucial point answers the question of what to do when the strategies explained in the book aren’t working—recognize that the other person has limitations or a different agenda that you do, and step away from problems that can’t be fixed.

To summarize, Beyond Blame is a phenomenal book, helping the reader to discover and realize revolutionary, yet incredibly basic, concepts pertaining to emotional relationships with others and with self.

APA Reference
Williams, K. (2016). Beyond Blame: Freeing Yourself from the Most Toxic Form of Emotional Bullsh*t. Psych Central. Retrieved on September 29, 2020, from https://psychcentralreviews.com/2016/beyond-blame-freeing-yourself-from-the-most-toxic-form-of-emotional-bullsht/