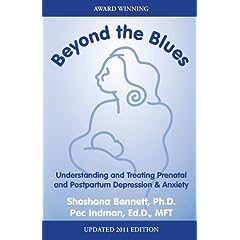 Beyond the Blues: Understanding and Treating Prenatal and Postpartum Depression

Beyond the Blues: Understanding and Treating Prenatal and Postpartum Depression & Anxiety by Shoshana Bennett, Ph.D. And Pec Indman, Ed.D., MFT is a very good read for such a serious subject that not only teaches other professionals the reasons behind postpartum depression (PPD), but the average person, whether it’s the mother or mother to be or family and friends of the mother. This book will help with the diagnosis as well as the myriad treatments for the different types of postpartum disorders.

While reading this book I was saddened by the lack of understanding that is often surrounding these problems but also hopeful that with reading materials like this, things will get better because they will be better understood. We now know that there is what is called simply the “baby blues,” which is not one of these disorders but simply a mild depression brought on mostly by physical changes in the new mother’s body. Although it should be treated and understood, it should not be mistaken for the more serious disorders that “Beyond the Blues” discusses.

This book set out to help caretakers of new mothers diagnose such problems as well as give several types of solutions for the various types of PPD. It also was written in such a way that the average person can understand what this terrible disease really is and how we might better help our families and friends through these hard times. It does a good job of removing the stigma and shame that has surrounded such problems. Hopefully, this will give pregnant women the courage to let their doctors know what’s going on even if it might feel embarrassing or confusing to the patient herself.

I especially enjoy the fact that the authors wrote several pages of questions the patients might have with answers that would make anyone feel more “normal” rather than the lepers they’ve been made to feel like in the past. One question is “Won’t medication be a crutch?” and the answer is, “A crutch is a temporary tool that you use until you no longer need it. If you broke your foot you wouldn’t think twice about using crutches to support you while your foot heals. Medication restores your brain chemistry to a normal state, allowing you to get back to feeling yourself and back to your life. As you become well, you and your doctor will develop a plan to wean you off the medication.”

Now, this might seem like a “no big deal” conversation, given the topic. However, I felt as though this was one of the ways that the authors legitimately make the once hidden topic seem as normal as breaking a foot.

Since giving birth and raising healthy, well-adjusted children is probably one of the most important jobs there is, it behooves us all to help keep mothers well-adjusted too. I believe in the fact that it “takes a village” so in that sense it takes a village to watch for problems with the mother, who is the main caregiver for the children in this world. We’ve seen and heard some horrific stories, which certainly aren’t the norm for mothers with PPD but the possibilities of tough and difficult to horrific are not possibilities that a new mother needs. If all of us read this book and understand more than we’ve understood in the past about this problem then maybe we can make it as easy to talk about as the “broken foot” scenario. That’s a nice thought when you consider we’re really on the fast track from hiding something in the basement to bringing it to the light of day.

I’m a 63-year-old woman who was lucky enough not to suffer from any of these problems when I had my two children. However, I was having my babies during the time when everything was simply called the “baby blues” and the mother was patted on the head and probably given the old standby in that day, valium, otherwise known as Mother’s Little Helper — which helped very little in most cases! I had several friends who suffered from what I now believe was PPD but were never diagnosed because they were ashamed or they were told by their doctors to “get over it.” Only through friends and families did some of them make it through without dire consequences and it’s good to know that this problem is now being brought to light.

This book, in my opinion, is something that should be in caregivers’ offices and even offered in whole or in part to women to take home and offer this information to the father, family and friends. If the mother never suffers from any form of PPD then she’ll be lucky but have also learned something she can pass on to someone else who might one day need it.

Beyond the Blues: Understanding and Treating Prenatal and Postpartum Depression & Anxiety

Beyond the Blues: Understanding and Treating Prenatal and Postpartum Depression