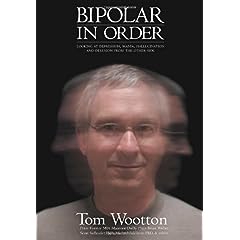 Tom Wootton’s new book, Bipolar In Order, asks the reader to approach bipolar disorder (otherwise known as manic depression) from a different light. Rather than viewing this mental health condition as a problem needing a cure, he asks that you look at it for what it is — a different way of living life with a different set of parameters.

Those parameters are the mood swings commonly associated with bipolar disorder — the mania and the depression. Wootton (who is also a Psych Central blogger) suggests that how you work with this concern is really a matter of perspective and “mind over matter.” He invokes a great deal of this through the components that make up “results worth striving for,” which include:

Identifying what’s needed and how exactly to achieve it are two very different things. This book does a very good job in describing what a different way of looking at bipolar disorder looks like, but ultimately it is up to the person to engage in the “Bipolar Advantage” treatment model that Wootton advocates to achieve the goals he lays out. In other words, this is not a “how-to” book, but more of a roadmap for a plan of treatment and living life with bipolar disorder.

In the first part of the first half of the book, Wootton lays out his roadmap for living with bipolar disorder not as a disorder or condition that needs to eradicated and “cured,” but one that needs to be better understood and accepted — and even embraced — by oneself. Embraced in the sense of understanding the pros and cons of one’s moods and finding a balance to bring them into a state where one can live with them and leverage them to improve one’s life. In Wootton’s world view, you still have mania, you’ve just learned to ride the wave rather than fight it. And the wave is lessened by appropriate psychotherapy, medication and other treatment strategies.

Certainly this is a world view worth of more attention and understanding by mental health professionals, who all too often see their job as to simply remove all the symptoms of a mental disorder. In doing so, they hope to remove the disorder itself from the person.

But with some disorders, like bipolar, we often talk about patients living with these disorders their entire life. So rather than talking about living with something as though it were a disability, why not look at how a person can put them into bettering their own lives by leveraging the symptoms for their intrinsic benefits?

The second part of the first half of the book talks more about the definition of bipolar disorder and the traditional way it is defined. Wootton then challenges the reader to re-examine these definitions from a different perspective, one of ability rather than disability.

In this section, he also emphasizes the point that the language we use often pre-defines things (in a mindless, not mindful, manner) by putting them into categories. This categorization that humans do is generally helpful in allowing us to make sense of the world. But it also limits our thinking and in doing so, limits our potential.

The second half of the book is taken up by describing the approach of the Bipolar Advantage program. This program, designed by Wootton, emphasizes a multidisciplinary perspective that includes the following components:

It’s an idealistic approach to treatment that I think most mental health conditions would benefit from. Sadly, in this country anyway, few of those things are covered under our health insurance, so to get this approach today requires a substantial out-of-pocket financial commitment.

Sometimes I would’ve found the book a bit easier to get through if the author had used existing terms for describing some of what he thinks is valuable. For instance, the idea of mindfulness is being aware of yourself in your surroundings and environment and acting with deliberate regard for your behaviors (e.g., not engaging in mindless activities). For most, this is a part of attaining self-mastery or self-determination — you first need to be aware of what you do in order to ensure you have control over it. So I had wished that Wootton would have used this more common term — mindfulness — over the terms he chose to use instead. I also sometimes had difficulty following the author’s train of thought in some chapters, but I thought that overall, the book was an easy read.