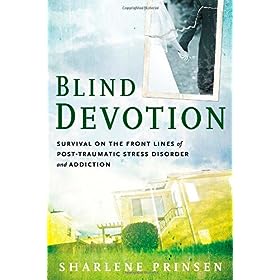 It would have been easy for Sharlene Prinsen to portray herself as a heroic martyr, or else as an innocent, one-dimensional victim. Yet in the memoir that centers on her marriage to a combat veteran suffering from depression, addiction, Post-Traumatic Stress Disorder, and self-harm, she never strays into such simplistic territory. Her husband Sean is more than just an evil aggressor; she and those she writes about are painted as complex individuals.

Blind Devotion: Survival on the Front Lines of Post-Traumatic Stress Disorder and Addiction gives a taste of the Prinsen’s gutsiness at the outset, as she begins by acknowledging that she herself has played a part in her family’s difficulties. In this, her first book, the author tells the searingly honest and remarkably brave story of her family’s battles with mental illness, charting the ongoing chaos they’ve faced following Sean’s service in Bosnia.

After his discharge, Prinsen tells us, her husband returns home to the States and is given a prescription for narcotic pain medication to help him cope with the pain of a neck injury he suffered during military training. It is here that things begin to quickly spiral out of control, as Sean becomes addicted to his pills and begins to self-medicate with additional over-the-counter medications and alcohol. His behavior throws the entire family into disarray.

“Alcoholism is an enigma,” Prinsen writes, “— as complex as it is puzzling. It follows no rules and has no boundaries. Like a giant vacuum, alcoholism goes after everything and everyone in its path. It is a family disease — everyone in the family gets sick.”

Because Sean is reluctant to speak about the trauma he experienced in the military, or to share the truth about his depression with anyone, Prinsen assumes that her husband is simply suffering from addiction. It takes many years for her to understand and recognize the nature of PTSD and to connect the dots between the trauma Sean experienced in Bosnia and his subsequent depression and substance use.

“For so long, in the early stages of Sean’s addiction, I didn’t understand the destructive interplay between Sean’s PTSD, his depression, and his substance abuse,” she writes, explaining:

… Only he understood the desperate need to escape from the crippling flashbacks and the intrusive thoughts that blindsides him without warning, bringing with them the full force of the emotions that he felt in the original traumas. Only he understood the exhausting anxiety that kept him on high alert for ‘danger’ 24/7 and the need for something — anything — to keep that anxiety at bay. Only he understood how the pills helped him get through a night that would otherwise be plagued by the alternating horrors of nightmares or insomnia.

Sean’s PTSD continues to go undiagnosed, until he finally reaches crisis point. One night, in 2007, Sean suffers a complete breakdown and attempts what is known as “police-assisted suicide.” He becomes threatening and aggressive, arms himself with a loaded weapon, and calls the police to the house, almost as a challenge.

Prinsen recalls the horrific events of this evening, as she and her two young children are forced to witness Sean’s breakdown and frightening behavior, fearing not only for his life, but for their own. Sean survives, is arrested, and is subsequently jailed. Then, incredibly, after his release, the same thing happens again exactly a year later, as he suffers a repeat breakdown and once again challenges the police to come and get him, putting his family’s lives at risk in the process. By this point you’d be easily forgiven for wondering why on earth Prinsen doesn’t just leave, but it’s here that the relevance of the book’s title becomes clear. Prinsen adopts the military philosophy of “No One Gets Left Behind” and refuses to abandon Sean, no matter what anyone else tries to convince her, or how tempting it might sometimes seem. Looking back, she realizes that she plays a codependent role in the relationship, too.

But Prinsen doesn’t let her husband off the hook lightly, either, and always holds him fully accountable for his actions. “It took me many more years to fully grasp the reality that abuse isn’t just physical,” she writes. “Sean was a master at manipulating my emotions to get just what he wanted, and as difficult as it is even today to say the words — that is abuse.” Sean also used threats of suicide and self-harm to keep her from leaving or setting healthy boundaries, she tells us, recognizing it as a form of abuse. His “screaming, the holes in the wall, the slammed doors, and the broken objects” are also “definitely abuse.”

Later, Prinsen recounts, with brutal honesty, how she at times longed for her husband’s demise:

It is rare to find these sorts of frank admissions in a personal memoir, let alone a first book, and it is this fearless honesty that makes Prinsen’s story so powerful. One can only imagine how difficult it must have been for her to put all of this into writing, knowing that her husband, friends, and family would all be able to read it. At one point in the story she finds herself wondering, “What will people think when they see this in the newspaper?”

In addition to sharing her own raw experiences, Prinsen also follows every section of the book with a short factsheet, providing the reader with a brief summary of the fundamental topics covered and links to further resources. These factsheets might easily have seemed disruptive or out of place, but Prinsen keeps them concise and informative.

The author also raises some vital ethical and political issues, questioning the morality of a government that puts soldiers in situations that destabilize their mental health, then prosecutes them as criminals. “How can we expect our veterans to come back to their homes and be ‘normal’ again after they have seen humanity at its worst?” Prisen recalls thinking angrily as she and Sean walked out of court one day. She feels sick when considering that Sean, who had never had any trouble with the law before he was deployed to Bosnia, was now a twice-convinced criminal. “What kind of a country is this to condemn and shame its own soul-wounded soldiers in such a way?” she asks. “Why don’t we just help them?”

Blind Devotion lives up to its name as a remarkable testament to the unquestioning power of love against all other odds, including the most destructive forms of mental illness. This is a story of survival, with protagonists who are determined to conquer their personal demons and triumph, no matter what. Prinsen’s writing will appeal to every reader, regardless of whether or not they’ve had to deal with PTSD. For the hundreds of thousands, if not millions, of military families who can relate to her experiences firsthand, hearing Prinsen speak about them so openly and shamelessly will surely be a relief.