Reviews Home » Blind to Betrayal: Why We Fool Ourselves We Aren't Being Fooled 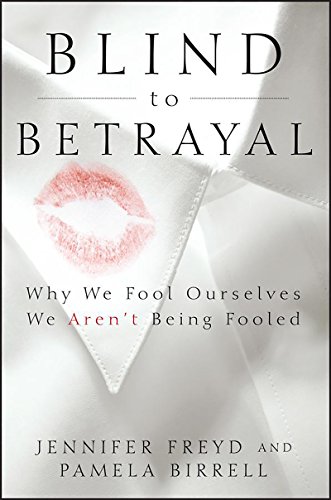 Blind to Betrayal: Why We Fool Ourselves We Aren't Being Fooled

It would be hard not to judge Blind to Betrayal by its cover. Readers could be forgiven for thinking it’s a how-to book on catching unfaithful spouses. But while there are several stories of infidelity, what’s most pressing to authors Jennifer Freyd and Pamela Birrell is the way that otherwise observant and intelligent people can remain, as they call it, blind to betrayal, “not seeing what there is to be seen.”

Over 14 chapters, Freyd and Birrell tackle — with varying degrees of success — what this constitutes on individual and societal levels, its long-term damage, and recovery. The book is a fund of insights culled from the authors’ academic research. It also illuminates the public’s dim understanding of the realities of abuse and trauma and the steps needed to combat that ignorance. Unfortunately, it remains an uneven read.

How do people overlook blatant signs or instances of betrayal? According to Freyd and Birrell, who have collaborated at the University of Oregon for over two decades, the answer is a concept they have pioneered: “betrayal blindness.” A state of mind where a person is unable to see and unwilling to perceive or understand something potentially harmful.

But why should we not want to know that someone has betrayed us? Freyd and Birrell believe it’s actually an effective way for the mind to deal with the attendant traumas of betrayals like sexual or physical abuse without rupturing the status quo, however unpleasant that status quo might be.

Often, those betrayed are vulnerable developmentally, emotionally, or financially. This vulnerability forces victims into a bind. To confront the betrayer (e.g., a father who sexually abuses his son) may result in further betrayals, such as denial or disbelief from other family members. The son also has a strong biological imperative to maintain a relationship with his caregiver. So, instead of jeopardizing the status quo, the son’s mind opts for “block[ing] out awareness of the betrayal.”

This blocking out requires “convolution, so that one can be in the dual state of knowing and not knowing something important.” Imagine Orwell’s doublethink; a lie always one step ahead of the truth prevents the victim from having to confront or even acknowledge that they have been harmed.

Blindness has especially pernicious consequences for children, the book explains, because they tend to “turn the blame inward” as a way to understand the abuse and to maintain vital relationships with caregivers.

While blindness aids short-term survival, it has profound long-term consequences. Exposure to traumas high in betrayal “is linked to poorer mental health outcomes… and increased physical health problems, as well as an even greater risk of further victimization.” This is more often the case with women, the authors write, who experience steeper rates of exposure to high-betrayal trauma.

As a reader, however, it’s frustrating that the authors never define “betrayal” more than anecdotally, despite that their book centers on the term. Take just two lines as examples: “some betrayals are fairly mundane, but many betrayals are traumatic in their own right,” and, later, “our research supports the idea that exposure to betrayal is associated with more dissociation than is abuse that does not involve betrayal.” Without a definition or a consistent framework, the word starts to seem meaningless.

This problem is thrown into sharpest relief when the authors approach situations beyond the individual. Child abuse is a clear example of betrayal by a person socially obligated to protect and nurture another person in her care. Yet the more far-reaching examples lack detail or skepticism. Take this description of the Holocaust’s roots:

“There were betrayals on so many levels that led to the rise of Nazism and the Holocaust. Germans felt betrayed after World War I and attempted to deal with that betrayal, not by not facing and disclosing the betrayal they felt, but by turning to what looked safe on the surface — a government and a regime that established power by increasing suspicion and distrust among its citizenry.”

To fit the Holocaust into their model, the authors have glossed over more than a decade in less than a paragraph, to say nothing of the complex history of anti-Semitism in Europe. Their treatment of Apartheid is similarly thin.

Other examples are so optimistic they verge on naïve. At one point in the book, Hillary Clinton is blind to Bill’s infidelities. This the authors base on speculation from Clinton biographer Gail Sheehy.

Zoom out for a moment. For a politician like Clinton to admit she knew of her husband’s affairs and did nothing would be to throw her own ambitions under the bus. She seems instead to have opted for the government axiom “maintain plausible deniability.” Yet Freyd and Birrell apply betrayal blindness uncritically to show that “victims” like Clinton deserve the benefit of the doubt. That may be a good rule of thumb in many cases, but politicians aren’t defenseless teenagers and their public statements require a healthy dose of skepticism.

Freyd and Birrell’s argument is strongest when it focuses on individual anecdotes or results from carefully controlled, reproducible studies. When they wade into the messier unpredictability of politics or history, their argument begins to unravel. Fortunately, they spill more ink on the former. For those who seek to learn about how otherwise perceptive people can remain blind to betrayal, or how to help someone cope with traumatic betrayal, the book still serves as a good introduction.

Blind to Betrayal: Why We Fool Ourselves We Aren’t Being Fooled

Blind to Betrayal: Why We Fool Ourselves We Aren't Being Fooled

APA Reference
Zeiser, J. (2016). Blind to Betrayal: Why We Fool Ourselves We Aren't Being Fooled. Psych Central. Retrieved on August 3, 2020, from https://psychcentralreviews.com/2016/blind-to-betrayal-why-we-fool-ourselves-we-arent-being-fooled-reviewed-by-john-w-w-zeiser/