Reviews Home » A Brief History of Anxiety: Yours and Mine 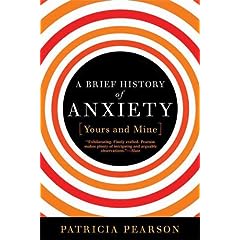 In the U.S., 40 million adults have an anxiety disorder. Author Patricia Pearson is one of them: She is a regular visitor to Flu Wiki, an online community that fears an impending influenza outbreak. She compares her “uncomfortable but meaningless” angst to Edvard Munch’s The Scream.

In A Brief History of Anxiety: Yours and Mine, Pearson describes the Flu Wiki:

“The conversations ranged widely, from scientific discourses on virus mutation to historical analysis of pandemics, to tips for home fuel storage—on the presumption that self-quarantine would be the only effective protection from contracting the virus.”

Though she realizes that her fears may be unwarranted and absurd, she can’t stop stockpiling her house with twelve containers of freeze-dried vegetables and powdered butter, which requires 27 cups of water. Still, she isn’t hypervigilant about everything: She doesn’t fear house fires, terrorism, crime or harm striking her two small children.

But she fears other things, including the dark, the state of her finances and on one occasion, her car exploding. Her phobias are chameleons:

“My anxiety is a shape-shifter. It visits me in unfamiliar guises. Phobias, in particular, tend to take me by surprise, as they rear up and then fade away depending upon the stresses in my life. One minute, I’ll be going about my business, being the sort of person who likes to fly on airplanes and to marvel at the deceptive fluffiness of clouds, and the next thing I know I’m in a state of white-knuckled panic as the jet I’ve just boarded powers itself off the tarmac. After a few years, that phobia resolves and something else—some other act or object—unexpectedly becomes the embodiment of all that is terrifying.”

As she delves into her own anxiety — triggered by a devastating relationship — Pearson tries to understand our anxiety, too, wondering why America tops the list of countries with anxiety disorders. While 28.8 percent of us suffer from anxiety disorders, only 6.6 percent of Mexicans do. We’re also nine times more likely to be anxious than citizens in Shanghai.

For insight, Pearson looks to a variety of experts, including psychologists, psychoanalysts, psychiatrists, philosophers and writers. In turn, she creates a book that’s rich with research without being overwhelming or reading like a textbook. She weaves her own experiences with the work of today’s thinkers and luminaries from long ago. Her writing is witty, humorous and powerful. There’s no highfalutin’ language. No psychobabble. Individuals with anxiety may very well see themselves and find that Pearson captures perfectly the gnawing angst of anxiety:

“There are several ways to cope with dread, but I specialize in what psychologist Maria Miceli calls ‘hypothetical analytical planning.’ This is where you lie in bed at night and run through as many perspective scenarios as you can imagine and then rehearse them in French, or from the vantage point of a cat.”

“The signature vexation of anxiety is that it is objectless. It washes over one in formless waves, pulls one under until the pressure and constriction are tangible and panic rears: I’m in deep, I’m going to drown.”

Part of our problem, Pearson concludes, is that we turn to pills at a time when our anxiety might be telling us that we’re “caught and flailing in arrested development.” She draws on this conclusion after quoting Danish philosopher Søren Kierkegaard:

“Anxiety is an alien power which lays hold of an individual, and yet one cannot tear oneself away, nor has a will to do so; for one fears, but what one fears, one desires.”

Kierkegaard viewed his own time as “the cowardly age,” when a person “does everything possible by way of diversions and the Janizary music of loud-voiced enterprises to keep lonely thoughts away.” Pearson sees the same thing with today’s society, except that we push existential philosophy aside. We’ve also sidelined meaning, a result of rationalism, which was supposed to reduce our fears. Instead it’s only “invalidated meaning, which merely served to heighten our dread.” The idea that we can control our lives hasn’t helped us either.

Pearson also talks about the culture of the workplace, where employee loyalty has been replaced with fake “team building” and traits viewed as positive and polite in countries like Japan — “being deferential, soft-spoken, courteous and self-effacing” — are considered disordered here in the U.S. (i.e., “social phobia,” “avoidant personality disorder,” “workplace depression”).

She dedicates a chapter to “a drug’s odyssey,” in which she describes her own experience with medication. In the first few weeks taking Effexor, Pearson feels like it’s “heaven-sent.” But then she begins to feel “apathetic insincerity.” She likens her “secure and yet largely disengaged” state of being to her first job out of college ghost-writing letters at Ontario’s Ministry of Labour:

“I did not enjoy this ghostwriting job, mostly because I spent the day responding to genuine human calamity by (a) pretending that I was someone else, and (b) lying. Yet, it was effortless. Paperwork and coffee breaks and lunch, all at a placid pace. I watched the clock a lot, waiting for it to hit five. ‘Dear Widow Whose Husband Drowned in a Vat of Toner at the Wallpaper Factory, thank you for—‘Oh, five o’clock, gotta go.”

Pearson was addicted to Effexor for five years. Of her horrifying, heroin-like withdrawal, she writes:

“My withdrawal featured night sweats, muscle aches, and shortness of breath. There were the electric pulses but I was used to those from the times I missed a dose. (Seth Silverman in Slate best described them as feeling like someone had removed your skull cap and dragged a staticky blanket across your naked brain.)…On most days, I felt a sort of hypercaffeinated wiring and buzzing sensation, a feeling of continuous adrenal rush. It was like being mildly electrified. And then on certain days, it was as if someone had pulled the plug from the socket and the energy simply winked out. I experienced nothing but darkness, an unbearable density and weight that almost brought me to my knees.”

She faults her psychiatrist for failing to inform her of Effexor’s side effects, and criticizes psychiatry as a whole for steering away from talk therapy and withholding important information:

“How can so many thousands of people, very possibly millions, have been abandoned by so many of the practitioners of medical science and been made to fall back upon rumors and whispers about how to manage their meds? At first, I could only think that these particular doctors needed to be in control, to fix what they’re interested in fixing; they suspect that they’ll lose control if they allow their patients to make an informed choice. ‘I can repair your illness, but you need to know that you’ll become emotionally bland, sexually absent, likely fat, probably at risk of getting diabetes, and every time you miss a dose, you’ll feel like you’ve been shocked with a cattle prod. It’s up to you.’ They don’t want it to be up to you. They don’t trust your judgment. They think you’re nuts.”

It’s understandable why Pearson holds such a negative view of medication. Had she been provided with all the facts—which would’ve taken mere minutes to discuss—she could have avoided years of agony. However, as she scours history for insights on anxiety, she does little to explore all facets of pharmacology. Medication does help many people. It can be used to facilitate psychotherapy, jump-start recovery or help diminish debilitating, severe anxiety. But Pearson gives little in a well-rounded discussion. Her “cautionary tale,” as she describes it, certainly can help others to seek better treatment. If you’re considering medication, see a psychiatrist who specializes in anxiety disorders and who can answer all of your questions (and be sure to ask many). Don’t hesitate to do your own research and remember that you and your doctor are a team. You should never feel like a powerless bystander when it comes to your treatment.

Cognitive-behavioral therapy (CBT) is the first line of treatment for anxiety disorders — and a highly successful one at that. In fact, the success rates make other researchers envious, as one expert put it. So it’s disappointing that Pearson devotes just several pages to her experiences with the treatment. This does a disservice for readers who are learning about anxiety disorders for the first time. They may easily feel like there’s nothing out there that can help them. Pearson could’ve noted CBT’s efficacy and demystified the treatment for her readers.

What’s Pearson’s prescription for anxiety? For one, she calls for American society to grow up. She writes:

“What we need is to bend to the tempest like pine and palm trees—flexible, adaptive, attuned, yet fully rooted in our principles. What we need, in essence, is to grow up.”

We also should look inward and seek meaning. Pearson introduces her last chapter with a quote from the philosopher Rumi:

While this quote is empowering, it also implies that it’s best to treat an anxiety disorder on your own. And if you can’t reduce your anxiety, there’s something inherently awry. Again, anxiety disorders are treatable, and oftentimes, avoiding treatment only amplifies the anxiety. Seeking treatment means that you’re taking care of yourself; you’re seeking the resources that will help you get better. There’s no reason to suffer with anxiety. But Pearson’s point is important: Meaning is missing from our lives. In our “I want,” ever-entitled culture, it can be tough to find. But it’s key to us thriving.

Overall, Pearson’s book is a powerful read, which provides a refreshing perspective on anxiety in our age. It offers profound words of wisdom, coming from both Pearson and a slew of gifted, inspiring thinkers. And it can help jump-start your exploration into your own anxiety. At the same time, however, there’s no need to suffer. If you’re experiencing anxiety, make an appointment with a therapist who specializes in anxiety disorders.

APA Reference
Tartakovsky, M. (2016). A Brief History of Anxiety: Yours and Mine. Psych Central. Retrieved on April 3, 2020, from https://psychcentralreviews.com/2016/book-review-a-brief-history-of-anxiety-yours-and-mine/