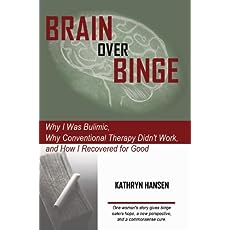 Bulimia had consumed Kathryn Hansen’s life for six years.  Sudden, often unpredictable urges drove her to eat uncontrollably and then to exercise for hours at a time.  One simple realization, “The only cause of binge eating is an urge to binge,” let her attain swift, complete recovery, with no worries about a relapse.  Brain Over Binge: Why I Was Bulimic, Why Conventional Therapy Didn’t Work, and How I Recovered For Good posits that the root of the disorder lies in its neurological underpinnings and is, in fact, the result of a healthy but misdirected brain.

Hansen writes as a layperson, with bulimics as her primary audience.  Her findings are also applicable to individuals with other eating disorders, particularly binge-eating disorder (BED).  In addition to Hansen’s own story, Brain Over Binge draws from studies on addiction, brain chemistry, developmental psychology, neurobiology, and nutrition.  Her approach both critiques and builds a bridge to conventional treatments, offering a new and valuable perspective to therapists working with eating disorders and addictions.

The book’s three sections include a memoir about Hansen’s experience as a bulimic and her recovery; her research into the mechanisms underlying her eating disorder; and risk factors, such as low self-esteem and poor body image, that had been the focus of her unsuccessful therapy.

Hansen is straightforward and candid in describing her ordeal of near-constant quests for food, the pleasurable numbness and trances associated with bingeing, and marathon gym workouts to purge herself of calories consumed.  Her obsession with food and exercise exhausted her, jeopardizing her chance to lead a “real life.”  Her inability to control her urges produced “shame, guilt, disgust, isolation, and self-hatred.”  These feelings did not cause the act of bingeing but arose from it, a crucial distinction overlooked in treatment.

From age 18 to 22, Hansen had undergone psychodynamic therapy, cognitive-behavioral therapy, and addiction therapy, the approaches most widely used to treat bulimia.  She asserts that each approach makes false assumptions about the nature of the disorder, focusing on secondary issues rather than addressing bulimia head-on.  Particularly damaging is the view that bulimia is a disease that happens to people, rather than a conditioned behavioral habit over which the bulimic can take control at any time.

Hansen ultimately deprived her bulimia of its power by separating it from her other problems instead of connecting it to them as her therapists advised.  Her other problems then became more manageable because she could devote more energy to coping with them, rather than to her disorder.

“Throughout my years of binge eating, it was obvious to me that my urges to binge were inconsistent with my true self — the person I believed myself to be in the present and the one I wanted myself to be in the future,” she writes.  “My urges felt intrusive, often arriving when I least expected them and taking over my mind and body like a thief, driving me to do something I knew I’d regret.”

The drug Topamax (topiramate) produced only short-term relief, but offered Hansen a clue into the nature of her disorder.  “It had nothing to do with any progress I’d made in therapy,” she writes.  “I simply stopped having those all-too-frequent urges to binge, all because of a medication that somehow regulated my brain.”  The exact function of Topamax and other drugs in treating bulimia is unclear, but Hansen maintains that they, too, take an indirect approach.  “The drugs didn’t act on the real problem: the urge to binge.”

Jack Trimpey’s book Rational Recovery: The New Cure for Substance Addiction gave Hansen the tools she needed for her recovery.  She learned that her urges to binge came from her subcortex or “lower brain,” the seat of her survival instinct.  Kicked into high gear by her anorexia and by excessive exercise, her lower brain reacted to the threat of starvation by signaling her to eat even when food was plentiful.  The more Hansen gratified that urge, the more it became a habit, literally changing the neural pathways in her brain and giving rise to her “binge-created brain-wiring problem.”

She compares her lower brain’s signals to a child throwing a tantrum to get a toy.  Giving in to the child’s demands reinforces the tantrum.  The tantrum can then be practiced in additional situations; once rewarded, it becomes linked with those situations.  In this way, the “triggers” for Hansen’s binges kept multiplying; but they were only associations.  The true cause of Hansen’s binges had always been the urge to binge itself.

Trying to substitute her binges with other activities had failed, in the same way that responding to a tantrum with a hug fails if the child really wants a toy.  Hansen’s tantrums — her lower brain’s signals to binge — succeeded only because she paid attention to them.  Her attention led to increased neural firing, which in turn strengthened that pathway in her brain and literally fed her habit.

Her lower brain could not control her actions, but her prefrontal cortex (her “highest human brain” and the seat of her free will) could.  Hansen recognized her irrational urges as “neurological junk” unrelated to actual need.  Rather than try to fight, reason with, or “surf” those urges, she acknowledged their presence and otherwise ignored them.  Her detachment stripped them of their emotional significance, making them less of a threat.  Their neural connections weakened until the urge to binge simply faded away.  Hansen’s need to purge as compensation for her bingeing vanished in turn.

She likens her “brain over binge” technique to the practice of “mindfulness” taught by neuropsychiatrist Jeffrey Schwartz to people with obsessive-compulsive disorder.  Mindfulness involves observing spontaneous thoughts and feelings in a way that is nonjudgmental, as though they belong to someone else.  Doing so helps patients resist the urges associated with OCD.

Central to Hansen’s recovery was the knowledge that she could take matters into her own hands rather than make excuses for her behavior.  Contrary to what she had learned in therapy, bingeing was not her method of coping with life.  It was not part of a disease.  Blaming it on a trigger was an inaccurate assessment, even when doing so made her feel less accountable for her actions.  Her bingeing was a bad, persistent habit stemming from her own poor choices.

“I knew my thoughts were not under my control, but my actions were,” she writes.  “I found it infinitely more gratifying when I accepted responsibility for my behavior and chose to change it.”  She maintains that the bulimic always has that choice.  Readers familiar with Dr. William Glasser’s Reality Therapy may find similarities in Hansen’s “no excuses” approach.

Certain risk factors had predisposed Hansen toward the restrictive dieting that launched her bulimia.  Poor body image was one, but only a small fraction of American women with poor body image develop eating disorders.  Likewise, Hansen believes that low self-esteem has only an indirect link to eating disorders.

Hansen advises telling teenagers, especially girls, that post-pubescent weight gain is normal, healthy, and will stop.  Furthermore, restrictive dieting can be dangerous even when weight loss is recommended for health reasons.  “Adolescents in a situation where they need to make changes to become healthier should be educated about survival instincts and why their bodies initially protest even healthy changes in eating habits.”

Traditional therapy can aid in recovery, which Hansen defines as “ceasing binge eating and preventing it from ever coming back.”  Bulimics who have lost the motivation to recover can use psychodynamic therapy to access their “true self,” so that their higher-functioning brain can resist the lower brain’s signals.  Cognitive-behavioral therapy can help correct faulty beliefs regarding weight and body shape.  CBT can also combine with the brain over binge technique, helping patients find alternative activities once the urges to binge are recognized as neurological junk.

Addiction therapy can help a binge eater avoid problematic foods while she detaches herself from her cravings.  If wished, the foods can then be gradually reintroduced in controlled amounts.  Finally, Hansen redefines the first three steps of Overeaters Anonymous, emphasizing self-reliance through the power of her own, highest human brain.

Like Hansen’s, my recovery from years of chronic bulimia was swift, complete, and attained without therapy.  Unlike Hansen, I had accomplished it through a radical lifestyle change unrelated to the disorder.  I had not experienced intrusive urges as Hansen had; instead, my bingeing had always felt like a conscious, purposeful choice.  Its usefulness to me faded after I took control of my life in other areas over a quarter century ago.

I believe the difference between Hansen’s journey and mine underscores the need for alternative approaches to a problem that can take many forms.  Hansen adds an important and needed voice to the literature on bulimia and eating disorders.

Brain Over Binge: Why I Was Bulimic, Why Conventional Therapy Didn’t Work, and How I Recovered For Good