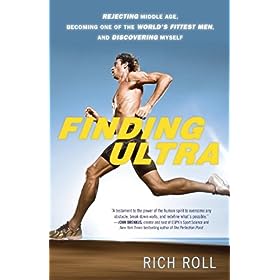 Recently I read the memoir of an endurance athlete, Finding Ultra: Rejecting Middle Age, Becoming One of the World’s Fittest Men, and Discovering Myself. It tells the story of Rich Roll, who, after a promising swimming career, falls victim to alcoholism and unhealthy eating – crippling his relationships, career and health.

On the eve of his 40th birthday, Roll rediscovers a passion for healthy living in the form of endurance sports, such as triathlons and marathons. The goal is prolonged physical activity over an extended distance. An Ironman triathlon, for example, is a 2.4-mile swim, 112-mile bicycle ride, and 26.2-mile run.

Roll overhauls his diet, exercise regimen, and career to become an endurance athlete. He struggles mightily, even bringing his family to the brink of bankruptcy to fund the venture. In the end, however, he succeeds, finishing many Ironman races and becoming among the “World’s Fittest Athletes” in the span of a few years.

As I consider Roll’s story, I marvel at his effort to overcome alcoholism and harmful eating. However, the demands of his reformed “endurance” lifestyle – including intensive exercise (more than 25 hours per week); a strict diet (plants only); a demanding career (he runs a law firm); and a growing family (four kids and counting) surely must take its toll. I wonder, is Roll’s new lifestyle actually healthy, or did he merely trade one destructive addiction for another?

Too often, I think, we confuse physical fitness with health. However, health includes physical and psychological fitness. An uneven balance in one direction can have a damaging effect on our body’s delicate state of homeostasis. Too much physical exercise, for example, can overwhelm our bodies, causing injury, fatigue, and even death.

As addicts know, the use of an object of addiction — such as alcohol, drugs, or exercise — creates tolerance, which in turn increases the threshold for desired effect. The endurance athlete’s perpetual chase for endorphins — that fine line between pleasure and pain – is similar to the incentive that drives a heroin addict to chase his next fix. No wonder the limits of endurance sports are constantly being pushed. Rich’s crowning achievement, after all, is something called the EPIC5 – completing five Ironman races in five days. It had never been accomplished before his bid.

There are many psychological explanations of addiction, but a prevailing theory from the field of psychoanalysis suggests that addictive behaviors serve as a defense against anxiety (Thombs, 2006). Though an addictive behavior, like drinking alcohol, may relieve anxiety in the short term, it can turn toxic when relied on too heavily.

This toxicity can take the form of damaged relationships, career, or health, which in turn causes the addict guilt. As Freud proposed many years ago, feelings of guilt lead to a need for suffering, which often develops into masochistic behaviors, or self-abuse. In a sense, punishment against self is a way to remedy the offense, ultimately balancing the scales of justice.

For a recovering addict, endurance sports may be an attractive option to meet these masochistic needs. Pain is inherent in endurance sports. This is an important distinction from other sports, in which the goal might be timing, precision, or speed. As the name implies, the primary goal of endurance sports is to suffer.

Endurance sports also require immense discipline, structure, accountability, and, of course, sobriety. Every workout, calorie and – for the truly dedicated – social interaction, is monitored. Here, a devotion to suffering is embraced, which makes it a haven for the addict in search of clean living.

Exercise addiction can be difficult to acknowledge, given that exercise is generally seen as a splendid healthy activity. It does not have the same stigma as alcohol or drug abuse, though it may be just as lethal. The mortality rate of exercise addiction in the U.S. is currently unknown, but eating disorders, a highly co-occurring disorder, have the highest mortality rate of any psychiatric disorder, including alcohol and drug dependence (Subha & Elizabeth, 2013).

It is challenging to be objective about our fitness. Thus, it is important to rely on family, friends, and other supports to identify warning signs of addiction. More importantly, it is necessary to take steps to treat them. Warning signs include: constant thoughts about exercise; unpleasant feelings when exercise is discontinued; missing family, work, and social obligations due to exercise; continuing exercise despite injury or illness; and working out more than 150 minutes per week (Landolfi, 2013).

Addictive behaviors, if left unchecked, inevitably turn toxic. In his quest for fitness, Roll confronts the paradox of an “addiction to health.” For him, to be an endurance athlete requires an obsessive devotion to food and exercise and an unfortunate neglect of relationships and other obligations. He is to be admired for his commitment to clean living, though a true addiction recovery would prescribe more balance.

The title of Roll’s memoir, Finding Ultra, suggests that his search ended successfully. However, success is a subjective ideal and varies from one person to the next. I can’t help but wonder, in his search for health, what did he lose?