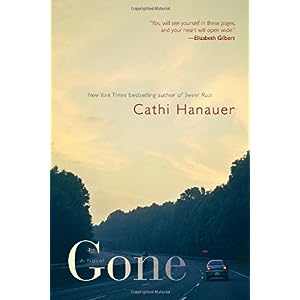 Cathi Hanauer’s Gone explores life’s pitfalls, changes and second chances, leaving the reader beautifully satisfied and content with the pages before them.

The narrative alternates between the protagonists’ contrasting viewpoints. Eve Adams must cope with the dawning realization that one night she’s wining and dining with her husband, Eric, and the next day she discovers that he’s gone. He’s driving westward, farther and farther away from their Massachusetts town. As a nutritionist/consultant, Eve has clients, a busy schedule and two children: a young boy and a (very hormonal) 14-year-old girl. Yet, she must press onward and conduct her daily routine, with its various stressful nuances, husband or no husband.

Eric is immersed in his artistry. He’s a sculptor, struggling with his work and yearning to create something that reflects the times – even if that produces sculptures that are darker than what he’s previously sold. His wife’s career started taking off at full speed and time together was limited. It all combined for a drastic breakdown-inspired road trip.

As utterly selfish as Eric’s sudden departure is, the reader can garner empathy and compassion, especially when it’s evident he feels depressed and wholeheartedly inadequate. He is lost and has reached a standstill with his art. He realizes that there is a meaningful truth in looking outward, beyond that passion, beyond his artistic visions. While in Arizona, he helps a friend reunite with her ill mother, which offers a glimpse into the other ways he could invest in his purpose.

“Having witnessed this evening’s reunion between Dria and her mother, he found it hard to believe he’d done anything wrong,” Hanauer writes. “The hugs and tears and squeals of surprise on the tiny cement porch of the cheap, run-down house made his heart, or some inside part of him anyway, feel better than it had in a long time.”

For Eve and Eric to return to the life they once shared, they both would have to discover a path to start anew, while preserving the foundational strength and greatness that was originally and firmly rooted in place. It is not an effortless task, since Eric left and raised a red flag that their relationship was slowly falling apart.

This is one of those reads that I’d recommend to both women and men. The various themes interwoven in Eve and Eric’s stories will perhaps ignite an identifiable spark, or just simply compel you to explore further the words embedded in Gone.