Reviews Home » Book Review: How to Be Alone 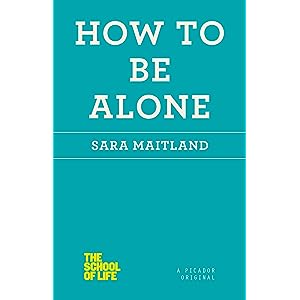 Book Review: How to Be Alone

I recently took a 10-day solitary road trip through Oklahoma, Nebraska and Kansas. A few stops to promote a new book required interacting with other people, but otherwise it was just me and my car and miles and miles of glorious prairie. I put about 2,000 miles on my car on that trip. I drove alone, explored alone, ate alone, and slept alone. And I was happy.

So I’m not really the audience for the new book How to Be Alone by Sara Maitland, a British author whose previous books include The Book of Silence.  Maitland has lived alone for 20 years in a remote region of Scotland that has one of the lowest population densities in Europe, so she’s kind of an expert on alone. And in this little easy-to-digest philosophical/historical/self-help book, she explains, celebrates, and provides lessons in successful solitude.

Those of us who know the pleasures of solitude don’t need convincing or lessons in doing it (although the affirmation is nice), but there are reasons people who are not naturally drawn to solitude might benefit from this book. Perhaps, Maitland suggests, you have a creative project requiring full immersion (I frequently take solo retreats to write). Perhaps you realize that, for one reason or another, you would be better off without the people in your life but fear breaking free. Perhaps solitude has been foisted upon you — through divorce, bereavement, a change of location. Or perhaps you simply crave but fear solitude.

Then this book is for you.

Maitland starts by examining society’s suspicion of people who prefer solitude to company. In a chapter titled “Sad, Mad and Bad,” she discusses the ways society pities, condemns, and fears solitude, and how this has changed over time. For example, she points out that “spinster” was a term of admiration in the Middle Ages; it referred to a woman who could spin well and was therefore financially independent.

“Once upon a time, and not very long ago, the word ‘lone’ had rather heroic and adventurous connotations: the Lone Ranger was not sad, mad or bad; Texas freely and proudly adopted its nickname: The Lone Star State.1 But recently, ‘loner’ has become media shorthand for ‘psychotic mass murderer or sex fiend’.”

After a few chapters of reflection on the history of solitude and society’s attitudes towards it, the book gets more personal, starting with a chapter on fear.

“Remember it is quite normal to be a bit frightened of being alone. Most of us grew up in a social environment that sent out the explicit message that solitude was bad for you: it was bad for your health (especially your mental health) and bad for your ‘character’ too.”

But, she points out that much of the ‘scientific evidence’ about the dangers of solitude to physical and mental health comes from people in solitary confinement — which is quite different from the experience of voluntary solitude. (Actually, she points out, there is no hard data on the effects, negative or positive, of solitude, mostly because it is such a difficult concept to test.)

The self-help chapters offer reflection and advice for acclimating yourself to solitude and enjoying it.

In a chapter about doing things you enjoy alone, Maitland explores historical changes in how we allocate our time since evolving from agrarian society, when work and leisure were intertwined. For farmers, who worked primarily alone or with a small group of family, going to market was a social occasion; and in “Common Shearing,” once typical in Scotland, far-flung farm families would gather to help each other shear their sheep.

“Now most of us do not work alone. We do not even work in the noisy, dangerous places that so isolated individual workers in nineteenth-century factories. But still when we think about ‘leisure’ in our time-stressed, noisy lives, we tend to think of social rather than solitary activities; and think there is simply no space, once we have built in work, maintenance, and ‘leisure’ for time to be alone.”

Maitland suggests starting small — take a walk or jog alone. She discusses adventuring alone (adventures, she says, are among the few socially acceptable/admired solo activities); experiencing reverie (why do we consider daydreaming a bad thing?); getting out into nature; and, of course, solo travel.

Curiously, there’s also a chapter titled “Learn Something by Heart” in which she recommends learning poetry, a foreign language, or the periodic table by rote.

“… a well-stocked mind enhances creativity, and a mental store of beautiful or useful items offers security, frees one from complete dependence on oneself and appears to aid balance and sanity in solitude.”

This was the first thing in the book to give me pause; I am intrigued by the thought that if I had a store of poetry memorized and were thrown into solitary confinement, or got trapped in a well, or was exiled to a cave with nothing with which to amuse myself, I would have something other than rumination to busy my brain.

So I guess even those of us who consider ourselves experts in being alone can learn something from How To Be Alone. Hopefully it will be released as an audio book; it would be good listening for a long, solo road trip.

Book Review: How to Be Alone