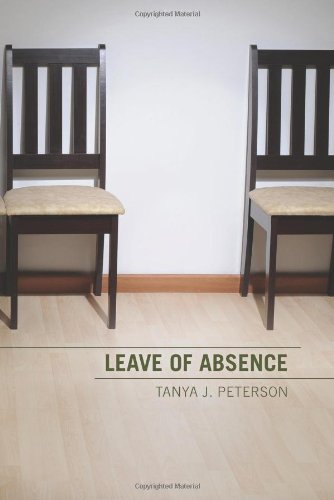 “It’s okay to feel frustrated for having to deal with this illness, but don’t hate yourself because of it. This illness is only a tiny part of you.”

Self-hatred is the central battle for characters Oliver and Penelope in Tanya J. Peterson’s heart-wrenching novel Leave of Absence. Peterson gives readers an inside perspective on mental illness and the challenges it presents. Although the characters’ diagnoses are vastly different, both struggle with a level of self-hatred that is understandable and unnerving.

Peterson holds a masters of science in counseling and has worked as a counselor in an alternative school for homeless and runaway adolescents. She is also a nationally certified counselor and has previously published a young adult novel about an abusive relationship. In her stirring book, her background as both a practitioner and writer is evident.

When Oliver Graham is introduced in Leave of Absence, he in on the ledge of a building, preparing to jump.

However, things do not work out as he planned and Oliver ends up in Airhaven Behavioral Health Center. He suffers from post-traumatic stress disorder and depression. Every sound makes him start, and he suffers from severe flashbacks to the day that his wife and son died. He blames himself for his wife and son’s deaths and feels that his suffering is punishment.

“Feeling better is impossible, and I don’t want to anyway,” Oliver says. Any form of comfort or positive feelings brings on a wave of guilt; he believes that since his wife and son can no longer live a happy life, nor should he.

In Airhaven, Oliver meets Penelope, a 30-year-old woman with delusional schizophrenia. Before her illness, Peterson writes, Penelope had a strong career in advertising and a wonderful relationship with a man named William. Although William has stayed with her over the years, the rest of her life has fallen apart because of her schizophrenia. She struggles with continuing her relationship with William; she feels it’s unfair for him to have to live a difficult life with a schizophrenic. William, on the other hand, is completely devoted to Penelope. He sees past the illness, past the daze that the medicine leaves Penelope in, and he sees the person at her core. He is the constant in her life even as she battles with a volatile Eleanor Roosevelt and converses with microscopic entities called Kerffies.

As the characters learn more about each other in their days at Airhaven, their stories are revealed to the reader. Peterson’s descriptions of the tragic death of Oliver’s wife and son as well as Penelope’s dive into a confusing and tumultuous life of schizophrenia are at times jaw-dropping and deeply moving.

Oliver and Penelope quickly develop a close friendship and become protective of one another. Oliver finds motivation to get out of bed each morning by focusing on his desire to be supportive of Penelope and provide her with a friendship no one else seems willing to give her. Penelope constantly gives Oliver the support and encouragement that he needs to take each step. She even goes so far as to fake a schizophrenic episode with a box of sock puppets.

The pair’s friendship extends beyond the bounds of Airhaven when Oliver moves in with his sister and Penelope goes home with William. Leaving the security of the mental health center brings on a slew of issues for both. Oliver has to face his family’s death while being surrounded by his sister’s children. Penelope has to attempt a “normal” life with William, which she believes is impossible. The two friends remain close and inevitably end up saving each other’s lives.

Peterson’s novel is eye-opening and beautiful. She gives an inside view into the thoughts and feelings of people affected by mental illness. Her depiction of grief is also in-depth and heartbreaking. I was especially impressed with her description of Penelope’s episodes. There are chapters that focus particularly on Penelope’s view of events, which allows for Peterson to describe her hallucinations in more accurate details.

The writing flows smoothly, and the depictions of scenes, particularly the dramatic meltdowns, are so detailed that the reader gets sucked in. It was easy to fall in love with the characters, even the minor ones. Matt, one of the techs at Airhaven, is the voice of reason and comfort throughout the novel. By the end of the book, I wanted to be his best friend.

What happens to Penelope and Oliver? Does Oliver ever heal from his grief and move on with his life? Does Penelope take her medicines and marry William? I can only hope that Peterson will someday (soon) write the sequel to this beautiful piece of work.

My Pandemic Pledges: Will You Join Me?