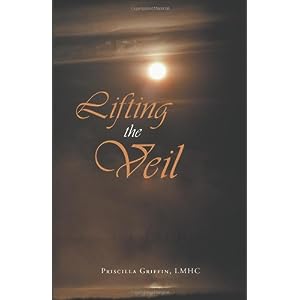 When I began reading Lifting the Veil, it seemed clear that the main theme was dissociative identity disorder — previously and popularly known as multiple personality disorder. The book appears to be a first-hand account of one therapist’s experience in treating a complicated patient. It is an interesting disorder to treat and to write about as there is a certain degree of disbelief surrounding it — despite that it is found in roughly 1.5 percent of the population.

But then, midway through, the book takes a bit of a turn. The therapist herself, author Priscilla Griffin, receives a so-called angel reading — which, according to her colleague who recommends it, is “like a psychic reading except the person connects to angels to get the information about the person who’s being read.” Angel readings, of course, aren’t in the DSM.

From angel readings, the book dives into past lives, hypnosis, clairvoyance, and energies, blending the therapeutic with the spiritual. If you are a skeptic, Griffin is unlikely to shift your thinking. However, if you are interested in exploring the crossroads between psychology and spirituality through the individual, you might enjoy her book.

Griffin is a psychotherapist with a master’s degree in counseling and 25 years of experience when she first meets Francine, a newly widowed 42-year-old woman. Initially it seems a therapeutic encounter much like any other, with Francine lamenting, “my husband died a year ago. I don’t know how to pull myself out of the depressed feelings I’ve been having lately.” As therapy progresses, though, and Griffin moves deeper, Francine begins to open up. We learn about the clairvoyance that was denied by the adults around her, and then about early and recurrent sexual abuse. It is during this opening up that Griffin first notices the change in Francine’s persona. As the patient in front of her seems to shift, she asks herself, “What just happened? Did Francine’s demeanor and voice really change, or was that my imagination?”

Slowly, we learn that Francine is not really Francine at her core, but rather Sandy. We are introduced to her cast of internal characters: Goo, Damien, Diana, Fran, Rebecca, Danni, and Amanda, to name a few. Each has a purpose and personality. While Goo, a playful four-year-old, is Francine’s childlike self, others are not so innocent, with Damien and Diana meting out punishments to Goo and the others and repeatedly threatening suicide.

As the therapy sessions progress, we see how each personality reports on Francine’s internal state. And we watch as the personalities struggle with what it would mean to unite. Goo tells Griffin, “I like being me and I don’t want to lose that. I like you, lady lady, but I don’t like you thinking we should become one. No one wants that.”

Over the course of the book, Francine is not the only one affected by the therapeutic process. Griffin reveals her own changing spirituality. Having been a devout Roman Catholic all her life, Griffin writes that her angel reading acts as a catalyst to spark a change in her beliefs. As she sees the effects of this in her life, she begins to incorporate alternative practices into her therapy.

After some trepidation, Griffin suggests a “spiritual clearing” to one of her clients, and the woman has a very positive experience. Griffin remarks that “hearing about this client’s experience was what I needed to break down walls I’d created that kept me away from talking about God and spiritual matters in my office.”

As the spiritual and the therapeutic blend, Griffin and Francine start exploring Francine’s past lives, revealing how many of the different personalities lived and, ultimately, died. It is a complex internal web that, depending on your own personal belief system, will either seem fascinating or ridiculous.

Griffin herself recognizes that the events push the envelope of plausibility, at times questioning her own story as it unfolds. This approach makes the book more palatable for the skeptic in all of us.

Through describing her time with Francine, Griffin also brings out important themes in the therapeutic process, particularly that of treading the line between the personal and professional. She raises difficult issues, such as whether and how a clinician’s spiritual and religious beliefs should color the therapeutic process, and the complications that come with becoming friends with a client once therapy is “complete.”

Thus Lifting the Veil becomes far more than a book about dissociative identity disorder. Griffin gives us an inside view of her journey treating a complicated patient, yes, but it proves unusually intimate and thought-provoking.

Study Probes Interaction of Genetics and Neural Wiring in ADHD