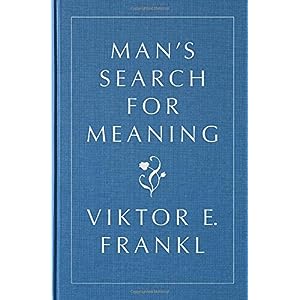 In a 1991 survey for the Library of Congress, readers were asked to name a book that made a difference in their lives. Viktor Frankl’s Man’s Search for Meaning was among the top ten.

It is a daunting task to review such a book. It goes without saying that Frankl’s seminal text is well worth reading and should, by most counts, be required for all students of psychology. This new edition contains an informative foreword by Harold Kushner, more forewords from previous editions, and Frankl’s own notable postscripts. Most important, however, is the main text, which remains a classic.

During the Holocaust, Frankl spent three years as a prisoner in the Auschwitz and Dachau concentration camps. As such one of the fundamental aspects of Frankl’s book is the theme of survival. Although Frankl witnessed and experienced horror, Man’s Search for Meaning focuses less on the details of his own experience and more on how his time under Nazi rule showed him the human ability to survive and endure against all odds.

The first half of the book attempts to answer a single question: “How was everyday life in a concentration camp reflected in the mind of the average prisoner?” Frankl gives examples of prisoners who found hope and the will to keep going even under torturous conditions — all of which, for Frankl, demonstrates the importance of what has become known as meaning making, regardless of situation.

It is in the second half of Meaning that Frankl details his therapeutic philosophy. As early as the 1920’s, Frankl, in his own practice, had begun to open psychotherapy to the spiritual and philosophic dimensions of human experience. During this same time, Sigmund Freud’s psychoanalytic school was the dominant influence throughout Europe. Freud’s approach gave little to no consideration to the spiritual and philosophic elements of human experience — the very elements that Frankl considered the cornerstone of examination.

Frankl viewed the Freudian approach as one that harshly reduced the human mental life to a few random elements and that lacked exploration of existential meaning.

“Man’s search for meaning is the primary motivation in his life and not a ‘secondary rationalization’ of instinctual drives,” Frankl writes. Frankl’s term for his own approach is logotherapy, from the Greek logos, which, loosely translated, denotes meaning. Logotherapy’s intent was to focus on the meaning of human existence as well as on man’s search for it.

Frankl’s theory holds that there are three primary human capabilities, or, in his words, noological possibilities: self-detachment, self-transcendence, and the ability to “spiritually be in touch” with something or someone independent of spatio-temporal dimensions.

In other words, humans cannot avoid suffering, but they can derive meaning from it.

Frankl identifies three primary postulates to complement these capabilities. First, the anthropological postulate, which can be best summarized as “man does not simply exist but always decides what his existence will be, what he will become in the next moment.” The salient feature of the anthropological focus is that it rebuffs what Frankl calls “pan-determinism.” That is, it goes against the idea that man is a conditioned animal. Frankl sees man’s capability quite differently, writing hat man is “ultimately self-determining.”

The second postulate is psychological, and holds that man’s key motivation is the search for meaning. Meaning making is a unique process for each person and can only be fulfilled by that person if it is to be satisfying, Frankl writes.

The final postulate is philosophical, and it is here that Frankl’s life during the Holocaust provides especially powerful examples. The philosophical postulate holds that life has unconditional meaning, regardless of the circumstances or situation. Indeed, during his time in Auschwitz and Dachau, Frankl writes that he found glints of meaning that helped strengthen his will to survive.

Quoting Nietzsche throughout the book, Frankl seems to favor one quote in particular: “He who has a why to live for can bear almost any how.”

It is upon that single idea that Frankl’s philosophical postulate appears to be based.

Frankl spends relatively little time discussing how to integrate logotherapy into a conventional psychotherapeutic practice. However, several tenants are apparent, foremost among them the idea of non-judgment. The logotherapist, Frankl writes, “is the least tempted of all psychotherapists to impose value judgments on his patients, for he will never permit the patient to pass to the doctor the responsibility of judging.”

But the idea of non-judgment, while noble, is not always practical. Here, logotherapy meets with some limitations as an intervention. Even the staunchest qualitative scientists admit that being bias-free is impossible by virtue of human intervention — and logotherapy is not immune to that finding.

Another common critique of logotherapy is the inability to test it. Unlike other theories — say, social modeling or behaviorism — logotherapy does not easily lend itself to quantitative inquiry. It is, just as Frankl describes it, a largely philosophical approach to the human inner world.

Yet despite the limitations of logotherapy from a quantitative perspective, the spirit of the idea remains remarkable. Frankl’s work has inspired other theorists — among them, Abraham Maslow and Stanislav Grof — to seriously consider the impact of esoteric elements of the human experience. This, in turn, helped them develop the field of transpersonal psychology.

In addition to the content, I would be remiss not to comment on the classic beauty of the new edition’s bookbinding. As a graduate student I cut my teeth on a haggard 1985 Pocket Books paperback. The latest reprint out now is a beautiful hardbound edition.

Either way, no matter the casing, Man’s Search for Meaning is a book I highly recommend, if only for the inspiration it has brought to readers around the world.