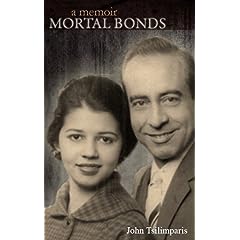 Losing one parent is devastating. But losing both parents within 13 days of each other? In his eBook memoir, Mortal Bonds, John Tsilimparis recounts his parents’ difficult deaths, his father from various health conditions and his mother from cancer. Tsilimparis describes their last months in vivid detail as well as how he tries to cope with losing both parents.

Another topic he closely explores is his severe anxiety. Since childhood, Tsilimparis has struggled with panic attacks, which peak as he tries to grapple with his family’s grim situation.

In addition to describing the present, Tsilimparis weaves in memories from his childhood along with his parents’ histories and how they met. He focuses on his father’s volatile nature and verbal abuse — a man who named his three sons after Greek gods, spewed insults regularly and left to the Caribbean and Europe by himself whenever he felt unappreciated — and how his behavior affected him and his family. (In short, it terrified them.) Tsilimparis also describes the other tragedies that punctuated their lives, misfortunes that members in the family had control over and those they didn’t.

Mortal Bonds reads like a page-turner. Even though readers know the result, you yearn to know how it all unfolds — and how it does is fascinating, gripping and heart-wrenching.

Tsilimparis also doesn’t hold anything back. In fact, there were many times that I was surprised by his candor and vulnerability. Psychotherapists are discouraged from revealing personal details. So to read a therapist be so open with his feelings, dreams and thoughts was refreshing. For instance, during one particularly dark time, he writes:

I still don’t know how I made it through the divorce. The detachment from Linda, although necessary, was nothing less than a flesh-ripping experience. I paid a huge price for falling in love too quickly. The breakup with my ex-wife inspired some of the worst episodes of panic attacks I had ever experienced. I was severely depressed and at times, suicidal. But even though I got to the point where I wanted to kill myself, the curse I was haunted by — to protect my mother — would not allow it. I had to remain strong for her, so I just kept on suffering.

Readers will find the memoir relatable on many levels. For one, as evident from the previous excerpt, Tsilimparis struggled with the very disorders he helps his clients with, including severe anxiety and depression. This highlights that none of us is immune to life’s battles — even therapists who people commonly assume must have it all figured out. (Note that many complex factors contribute to cause mental illness, including genetics and biology.)

Second, Tsilimparis’s experiences with his dying parents will resonate with readers. Many people fear their parents’ decline or passing, remember the moment or moments they realized their parents weren’t invincible and understand the change that a parent’s death brings.

Mortal Bonds also is well written, though some sections read overly dramatic and detailed. Still, the vivid prose helps readers feel the moments and gain a deeper understanding of the family’s dynamics, including Tsilimparis’s conflicting relationship with his dad and his impenetrable bond with his mom.

As you turn each page, you feel closer and closer to the family. Tsilimparis recalls some heartfelt memories with his father, showing readers that even the hardest of hearts can have a softer side. Still, reading Tsilimparis’s dad’s tirades is tough, especially when you consider how this life shaped each of them. Also hard to read is Tsilimparis’s descriptions of his parents’ decline — of the dignity that disease and old age take away — something again that readers will no doubt relate to. Throughout the book, Tsilimparis also thoughtfully draws insights into his parents’ behaviors and his own.

Ultimately, the memoir provides hope and shows that people can be incredibly resilient, even in the most horrific of times. And that even those times can bring light and transformation.

CPTSD, PTSD, OCD and Trauma: How Creating Boundaries Will Set You Free

Should You Be Able to Opt Out Even if You Are Not in a Risk Category?