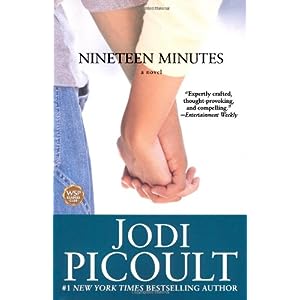 So writes Jodi Picoult in the acknowledgments section of Nineteen Minutes, a novel that thoroughly dissects a school shooting. In the book, Picoult surfaces empathy in unexpected places — empathy for the shooter and empathy for his family, parents mourning the loss of who their son used to be.

The book is set in Sterling, New Hampshire — a small town where “nothing ever happens.” Peter Houghton, a sixteen-year-old student at the local high school, shoots and kills ten of his peers. As his trial progresses, various truths about a former friend come to light — a friend who happens to be the judge’s daughter, and who has gone with the popular crowd to the detriment of Peter.

The book examines social hierarchies and how far teenagers might go to maintain their status. It also highlights how bullying can erode a young person’s sense of self — in this case, Peter’s.

Picoult is a remarkable storyteller, and throughout the book she guides us through unexpected viewpoints of the shooter and his trial. We learn about Peter’s family. We learn that ever since he was five years old, Peter was made to be the target — the outcast — for others to mock.

“On Peter’s first day of school, his mother put him on the kindergarten bus with a brand-new Superman lunch box,” Peter’s lawyer, Jordan McAfee, tells the jury. “By the end of the ride to school, that lunch box had been thrown out the window. From that very first day in kindergarten,” McAfee continues, “Peter experienced a daily barrage of taunting, tormenting, threatening, and bullying.”

The attorney enumerates some of these incidents. “This child has been stuffed into lockers, had his head shoved into toilets, been tripped and punched and kicked. He has had his private email spammed out to an entire school. He’s had his pants pulled down in the middle of the cafeteria. Peter’s reality was a world where, no matter what he did — no matter how small and insignificant he made himself — he was still always the victim.”

McAfee suggests that Peter could have been suffering from post-traumatic stress disorder. As a victim of incessant bullying and threats to his wellbeing, his crime might be interpreted as an act of self-defense.

At a time when school shootings have become the norm across the United States, Picoult touches upon another sensitive subject: the parents’ perspective. Peter’s parents, she reminds us, are deeply affected by the murders their son has carried out. Lacy, his mother, endures grief, despair, and self-defeating thought patterns. She tries to remember her son for who he was.

“Everyone would remember Peter for nineteen minutes of his life,” Picoult writes, in a line related to the title. “But what about the other nine million? Lacy would have to be the keeper of those, because it was the only way for that part of Peter to stay alive. For every recollection of him that involved a bullet or a scream, she would have a hundred others: of a little boy splashing in a pond, or riding a bicycle for the first time, or waving from the top of a jungle gym. Of a kiss goodnight, or a crayoned Mother’s Day card, or a voice off-key in the shower. She would string them together — the moments where her child had been just like other people’s. She would wear them, precious pearls, every day of her life; because if she lost them, then the boy she had loved and raised and known would really be gone.”

A novel that proves more and more relevant each time another school shooting takes place, Nineteen Minutes explores aspects that are often considered taboo. By looking at the shooter himself and his family, Picoult opens a space in our hearts for empathy and fresh perspectives.