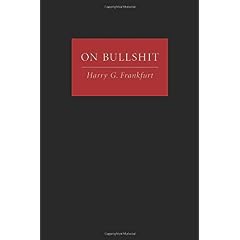 I recently asked a group of fitness professionals, “Are there more BSers or liars in the fitness industry?” You may be wondering, “What is the difference?” According to Harry G. Frankfurt (author of On Bullshit & Professor of Philosophy, Princeton University), BSers have no idea of whether a claim is true or false, they haven’t investigated the claim. The truth-value is of little importance to the BSer. On the other hand a liar misrepresents what they believe to be true.

On Bullshit is a pocket size, 67-page book discussing why BS is ubiquitous. Frankfurt discusses why BSers and liars are not necessarily operating with the same motives. I had never thought of differentiating the two before reading On Bullshit.

However, after reading Frankfurt’s book it become clear: there is a difference between BSers and liars.

The book begins with:

One of the most salient features of our culture is that there is so much bullshit. Everyone knows this. Each of us contributes his share. But we tend to take the situation for granted. Most people are rather confident of their ability to recognize bullshit and to avoid being taken in by it. So the phenomenon has not aroused much deliberate concern, nor attracted much sustained inquiry.

Frankfurt makes it a point to explain that someone who thinks they are lying can actually be telling the truth. The statement is a lie as long as the one making the claim “believes that the statement is false and intends by making it to deceive” (p.8).

Why are there so many BSers? There are two key reasons for so much BS, 1) ego inflation, and 2) customary communication.

Most people like to impress others with their worldly knowledge. The admiration of others increases self-esteem. Many people pride themselves on being good BSers, the type that can carry on a conversation with anyone or wow people with their smarts. Some of the most popular people I know are BSers, the life of the party. Personally, I don’t mind hearing a little BSing, which I participate in on occasion, but I hate the “over the top” BSer. The over the top BSer is sort of a bully. How do you shut down a bully? Call their bluff, and ask to see evidence to support their claims.

Society’s customary process of communication furthers the need for BS. Consider the following: you and your significant other attend a dinner party for your boss. After a few minutes of chitchat the conversation turns to politics. The next thing you know your co-workers are in a heated discussion concerning stem-cell research, they seem to be rather knowledgeable about the subject, and then they turn to you for your opinion. You panic because you know very little about the subject, but you decide to express your opinion anyway. You felt obligated to say something or else you may come off as rude–or even worse–stupid. This type of situation occurs on a regular basis. Bullshit is unavoidable when someone is forced to discuss a topic that they know little about.

Why are there so many liars? People lie because they don’t want you to know the truth (what they believe to be the truth), for whatever reason (too many possible reasons to list) at the time. Contrary to the popular motto, “always tell the truth,” lying is not always a bad thing. Everyone lies from time to time; anyone who says otherwise is lying.

Is there anything wrong with lying to cheer up a friend, to soothe someone dying, to boost your kid’s confidence? Many people would agree lying under those circumstances might not be so bad.

Toward the end of the book (beginning on pg. 57) Frankfurt discusses eight types of lying, as classified by Saint Augustine. Seven types of lies are intended to attain a goal. Only the remaining category, a “lie which is told solely for the pleasure of lying and deceiving, that is, the real lie” (p.58).

“Everyone lies from time to time, but there are very few people to whom it would often (or even ever) occur to lie exclusively from a love of falsity or of deception” (p.59). I would agree with Frankfurt on this point.

The book is small, but very informative.

Jamie Hale, MS., is a researcher specializing in eating behavior, cognitive science (various aspects) and scientific reasoning. Jamie has written seven books and co-authored one. He is a member of the World Martial Arts Hall of Fame (recognition of my strength and conditioning work with martial artists), college instructor, learning / memory consultant and board member of Kentucky Council Against Health Fraud. Visit Jamie's site at www.knowledgesummit.net.