Reviews Home » Book Review: Outside the Lines: A Novel 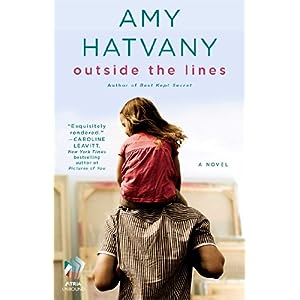 Book Review: Outside the Lines: A Novel

Outside the Lines powerfully encourages readers to reexamine their perspective regarding mental illness. Amy Hatvany intricately explores the world of someone who’s mentally ill, detailing painful repercussions, stigma and societal perceptions. And alongside this narrative, we witness a beautiful, deep-seated love between a father and daughter.

Instilled with a longing to find him, Outside The Lines features Eden as a young woman in her 30s, searching for her father while uncovering various truths along the way.

Hatvany delves into the realm of psychiatric treatment, and how certain drugs can cause more harm than good.

Since David protested against medication, he was never officially diagnosed. The drugs rendered him numb; they induced feelings of suffocation, a sense that he was trapped inside his own skin. He knew the medicine altered who he was at his core, and he feared losing his sense of self. He was afraid of dissolving into nothingness.

In fact, Psych Central’s article on the subject suggests another kind of remedy — one that hones in on the source of conflict without the unpleasant side effects.

“The fact is that at best psychotropic medications mask the symptoms of an underlying illness. Then when a person stops taking these dangerous drugs to steer clear of the health and mental health consequences, the symptoms often return,” the article stated.

“Instead, this most recent article in the British Medical Journal and the hundreds of others add weight to a scale that’s already tipped far in favor of a better way: psychotropic techniques that heal the root causes of anxiety or sleep issues and not drugs that mask their symptoms are the best way to treat addiction and mental health challenges.”

Outside The Lines also provides a contrasting viewpoint to how we may traditionally perceive those who embark on an alternative path; a road that may lead to detrimental consequences. It speaks to the notion of acceptance, of letting people be who they are, instead of who we want them to be. When someone is a danger to him- or herself, we certainly can insist that they seek help, and we can wholeheartedly demonstrate our support. However, we cannot force change unless it inherently stems from the individual. We can’t save anyone or fix the broken pieces. Regardless of our own choices and personal opinions, they’re on their own respective journey.

“I’m not saying give up, I’m just saying you could change how you’re looking at this,” Jack, Eden’s friend, said. “Open your mind to the possibility that your father’s choice to live outside the lines in society is fine for him. It might not suit me or you or the majority of other people but it suits him. And at the end of the day, that’s what matters.”

In “A Conversation with Amy Hatvany,” the author is asked to comment on David’s way of living, and how he used alcohol as a means to cope with the effects of his mental illness. Hatvany’s response reflects the aforementioned approach: “Whether it’s alcoholism or mental illness, if the person isn’t on board with getting treatment, it won’t succeed. David chooses to ‘manage’ his illness with alcohol, because it still allows him the lucidity to be himself. Is that the right choice? Maybe not. But right or wrong, healthy or not, ultimately, it’s his decision.”

Amy Hatvany’s Outside The Lines offers readers a bit of a different perspective on mental illness, while illustrating how love and forgiveness tend to prevail. It’s a truly touching read that is worth your time.

Book Review: Outside the Lines: A Novel