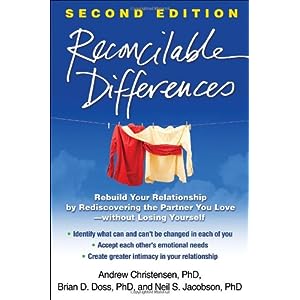 If you’re searching for one useful self-help book for couples, versus an entire bookcase of them, the second edition of Reconcilable Differences may be your answer. Through this revised text, readers committed to mending a relationship rife with serious recurring conflicts may find more clarity, conflict resolution solutions, and routes to greater acceptance of their partners.

The book has been updated to help readers better focus on a “core” problem. It is also now more inclusive, with examples relevant to the LGBT community. And it has been generally streamlined for an easier read.

The authors, all professors of psychology, aim to help two people move from chronic arguing to greater understanding of each other’s backgrounds and foibles. Part of doing so, they write, is taking into account differences in culture, ethnicity, family history, and emotional sensitivities.

And so these psychologists introduce a version of behavior modification therapy called the DEEP analysis for short. DEEP stands for Differences in personality and interests that may contribute to conflict, Emotional sensitivities that make differences more difficult to handle, External stressors complicating the issues, and communication Patterns.

Described as an integrative behavioral couples therapy (IBCT) (as opposed to a traditional behavioral-driven approach), the DEEP objective is to help identify an individual’s core struggle — the base of most chronic conflicts.

Research shows, the authors write, that in three- and five-year IBCT follow-ups, 50 percent of the seriously and chronically depressed couples continued to show significant clinical improvement relative to their initial functioning, despite that several years had gone by. (That sounds like pretty useful stuff if it keeps working long after therapy has ended.)

The book gives plenty of examples of long-standing issues that couples may have and how to diffuse them. Some center on how each person deals with stress. Some show how to be there for each other when it counts, or to manage vulnerabilities. Others illustrate over- and under-reacting and betrayals.

There is also a chapter devoted to the ubiquitous issue of communication and listening skills. The authors’ advice is to find a time and place where both people are comfortable, calm, and receptive to each other. They suggest talking about one’s own emotional reactions to a specific behavior the other does — keeping the focus on one’s own feelings rather than on the other person, and working to remain as neutral as possible.

This is a rather tried-and-true idea espoused by other frameworks as well. Put simply, the goal is to say, “I feel sad when we argue” instead of “You’re a jerk.”

The book also warns about “Apple Pie Advice” — tips from people on what love is and how to make it work that sound good but aren’t really useful. These nice but empty sentiments, the authors write, “don’t get you closer to the transformed relationship you desire any more than espousing the wholesomeness of Mom and apple pie tells voters what a politician will do once she or he is elected to office.” If someone tells you “just be good to each other” or “love is forever,” that doesn’t really get you anywhere.

In lieu of these sentiments, the book provides tailored communication techniques, questionnaires, exercises, and examples that hopefully give readers the power to heal their relationship. The notion is not to use trite language but to really learn to look at things from a wider perspective and to feel greater compassion for one’s partner.

Still, that goal is not always the end result. And what’s great is that the authors are realistic about this: They discuss how to get further support when their book, or any self-help program, is not enough. There is even specific advice to help readers figure out whether couples therapy might aid or hinder their efforts, and a list of hotlines and other references for when a partner suffers from serious issues.

Admittedly, before you even reach the couples-therapy crossroads, doing the exercises in this book is a lot of work. But so is any relationship worth saving. And even if Reconcilable Differences doesn’t fully mend a relationship, it reveals enlightening information about one’s self, the ways different people react to life’s struggles, and how greater understanding of others can help us in any number of situations.

Reconcilable Differences: Rebuild Your Relationship by Rediscovering the Partner You Love — Without Losing Yourself, 2nd Edition