Reviews Home » Book Review: The One & Only 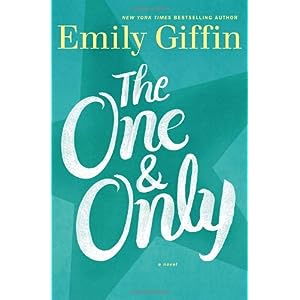 Book Review: The One & Only

A palpable buzz is in the air of Huntington’s renowned book shop. On a May night, this Long Island, New York, venue is packed with females and the demographic is vast: teenage girls, young women, and senior citizens all seated in place. We’re here to meet Emily Giffin, the incredibly sweet, down-to-earth Atlanta resident and New York Times best-selling author of six novels, including Something Borrowed and Something Blue. She’s here promoting her seventh, The One & Only.

Vanity Fair calls Giffin a “modern-day Jane Austen,” and The Atlanta Journal-Constitution writes that “Giffin is the creator of characters so real and so enthrallingly flawed that people sometimes forget that they’re fictional.”

During the bookstore Q&A, Giffin speaks about the storyline, characters, and themes embedded in her latest book. As she puts it, her protagonist, Shea Rigsby, is asking: Am I meeting my destiny? Is this the life I’m meant to be living?

The novel’s opening pages introduce us to Shea and her best friend, Lucy, who recently lost her mother. Lucy asks Shea to help keep her widowed father company. “But don’t you think he’d rather be alone?” Shea asks. “Well, you’re different,” Lucy says. “He actually likes talking to you.”

Lucy’s father, Clive Carr, is the head coach of Walker University’s football team. (In the small college town of Walker, Texas, where people are devoted to football and the thrill of the game, Coach Carr is a local celebrity.) This season means even more since his wife, Connie, passed away; he hopes for a championship win in her honor.

Meanwhile, Shea is sifting through her early thirties and concludes that her life is a bit too comfortable, a bit too stagnant. She yearns to change directions. She forgoes her job at the university’s athletic department to jumpstart her career in sports journalism. She breaks up with her boyfriend (where there is an inherent lack of connection), and she begins to date a famous quarterback. However, while Shea embarks on her new path, she realizes that she’s romantically interested in someone else — an intrigue that’s rather taboo and unexpected.

“I think if we’re honest, the way most of us think about romantic love is pretty narrowly defined, and there’s a tendency for us to dismiss or at least feel uncomfortable with, anything outside those definitions,” Giffin says in an interview with Refinery 29. “With this story, I really wanted to portray a relationship that, while difficult for someone to understand and accept initially, is beautiful and idyllic in its own right.”

I am a fan of Giffin, and I tend to gravitate toward stories that encompass aspects of transition. The One & Only does an incredible job of showcasing a character in the midst of self-discovery. Despite that many of her previous choices look good on paper, Shea longs to embrace what is considered far from typical, both romantically and in her career.

As a twenty-something myself, this mentality strongly resonates. Sometimes, even at a young age, we find we need to leave our old, expected ways behind. Sometimes, we fall for an unconventional partner. And as Giffin deftly conveys through Shea, unconventional love is still love.

Book Review: The One & Only