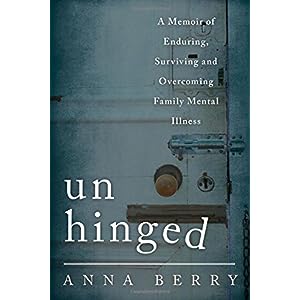 Anna Berry’s Unhinged is an intense read — a personal, in-depth account of the heartbreaking and grueling components of a life with mental illness. However, a pertinent takeaway message for readers is the optimistic road to recovery — one that doesn’t necessarily have to involve medication.

Unhinged delves into Berry’s painful history with mental illness. The beginning pages depict a rather exhaustive list of the multiple diagnoses she has received over the years. She validates her diagnosis of borderline personality disorder — an unstable childhood upbringing most likely left a poignant mark of trauma. Her mother and brother suffer from chronic mental illness that include serious bouts of schizophrenia and advanced obsessive-compulsive disorder. In addition, her father, who possessed symptoms correlating with sex addiction, did not facilitate a source of secure and healthy attachment.

An article on Psych Central discusses the link between trauma and borderline personality disorder.

“I’ll admit that when I hear that a client has borderline personality disorder (BDP), my first thought is ‘oh, this person is a trauma survivor of some sort,” Sara Staggs, LICW, MPH, said. “And while not all people with poor emotion management, impulsive and destructive actions, intense fear of abandonment and an unstable self image have a history of complex trauma, it gets me to a non-judgmental place where I’m able to be very open to hearing someone’s story.”

Berry becomes entangled in several toxic romantic relationships. She had a deep-seated desire to fill a void, to lose herself in someone else.

Throughout this book, readers will note her instances of psychotic episodes, homelessness, and struggles to rise above dire financial straits.

Unhinged portrays Berry’s pivotal rock bottom, and yet, she’s able to dig herself out of a massive hole that appeared dark and infinite. She transcended her illness, becoming a successful journalist, wife and mother. Medication did not comprise her recipe for wellness; she relied on mindfulness, meditation, positive self-talk and therapy.

“After several months of dedicated self-study, I feel the fog of my mental illness begin to lift,” Berry wrote.

“I have developed a level of self-awareness I have never known before. A life of mediation and mindfulness has literally changed my brain chemistry, in a way that no amount of medication can. I’ve discovered that Buddhist meditation is as effective, if not moreso, as western-style cognitive and pharmacological therapy in changing the behavior and brain chemistry of practitioners, up to and including increased sense of well-being, increased cognitive performance, greater longevity, higher levels of empathy, and increased levels of insight.”

“I exercise regularly and eat a healthy diet — which might sound trite or even self-important, but multiple studies have shown that making healthy physical choices also boosts your mental health and can even directly combat mental illness ranging from depression to schizophrenia.”

While medication may be vital for certain individuals, it’s not exactly a secret that it’s also renowned for detrimental side effects. Sometimes, the side effects of these drugs are fatal, particularly if the patient is vulnerable to addiction or has the drive to use them to commit suicide. In Berry’s epilogue, she explains that even “non-habit-forming antidepressants have been shown to increase the risk of suicide among child and adolescent depression patients, to the point that the U.S. Food And Drug Administration (FDA) recently placed its most severe ‘black box’ warning on those drugs.”

Unhinged is a memoir that may seem emotionally difficult to digest; however, Anna Berry’s recovery is infused with hope, optimism and enlightenment.