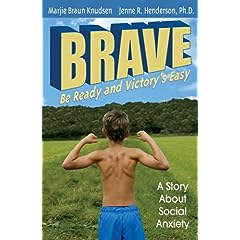 BRAVE: Be Ready and Victory's Easy

BRAVE: Be Ready and Victory’s Easy is a 96-page, large-print, softcover book is a quick and easy read geared toward helping children and parents find solutions for those who suffer from social anxiety.  The story is more for younger people; Danny, a fifth grader, is its main character.

Danny comes up with the typical excuses many of us might use to get out of some situation or event: a stomachache, headache, or some other form of pain. His classroom, friends’ homes, places he has never been and even his own home are presented as obstacles. Situations such as school assignments, public speaking, playground play and gym class trigger negative reactions in Danny, bringing out the need to find a way out.

The book includes a class bully, Sam, who finds any way he can to tease or annoy Danny.  There is the savior (in Danny’s eyes), Tiago, who seems to pull him out of a bad situation or save him from the Sam. A typical class — including the smart kid, Mark, who is Danny’s scholastic competition, and a teacher with rules that affect Danny’s behavior — are some of the examples the authors use to illustrate Danny’s suffering.

Danny’s mother is a prominent figure but his father only shows up as attending a school science fair. Danny’s schoolmate, Jack, also is a prominent character and has absent parents. Jack’s grandfather is his guardian while his parents travel. You can’t help but wonder if the authors are trying to send a message about the way absent parents or the lack of a strong father figure may add to the feeling of self-consciousness and social anxiety.

Danny’s mother starts off being a bit distant, almost uncaring, and gradually is shown to be more considerate and helpful.  Jack’s grandfather plays a larger role in Danny’s evolution– he finds everyday solutions to anxiety-causing situations by introducing the term BRAVE: Be Ready and Victory’s Easy.

Most school-age children will be able to relate to Danny, but the subject matter is not as successful as it could have been. Recovery from social anxiety is possible, but usually only with some kind of therapy or sustained self-help or support group work. The book shows an example of only the support group aspect of recovery.

I would not recommend the book as a helpful tool for this disorder, but being such an easy read, it may help in other ways. It would be best for children between the ages of 8 to 12 or for young parents starting to notice slight issues with their child’s ability to fit in.

Toward the back of the book there is a section listed as Note to Parents. It states Danny suffers from “symptoms” of social anxiety. Someone truly suffering from social anxiety could not so easily accept some of the solutions offered. On the other hand, when Jack’s grandfather talks about how he helped Jack fit in with his soccer team by taking him to a college team’s practices so Jack could see how the game is played and what the rules are, it was a better example of working through a tough situation.

I have a very mild form of social anxiety brought on by being constantly teased as a child and in my teen years. Not as much as a child but built up from my childhood. I oftentimes choose to stay home where it is safe rather than go where I might be uncomfortable. I envy people who get up and go on a whim with no thought as to who will be there, what might happen or even how they look. I was extremely taunted for how I looked growing up and now feel I need to look my very best before heading out to a social gathering. This book may have helped me to seek out someone willing to listen and help like Danny found with Jack’s grandfather.

BRAVE: Be Ready and Victory’s Easy, A Story about Social Anxiety

BRAVE: Be Ready and Victory's Easy